The 12 New Rules for Managing Your Employees As If They’re Real People. 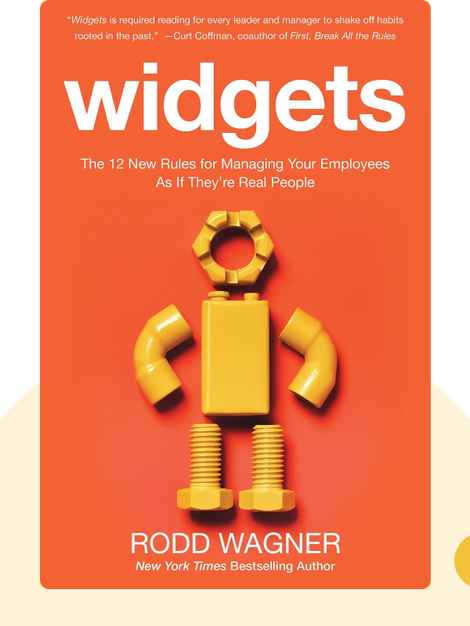 Widgets (2015) is a guide to improving employees’ performance, regardless of the field they work in. These blinks outline the fundamental principles, based on scientific research, that will help any company improve its efficiency, profitability and worker satisfaction.

Rodd Wagner has worked for a wide range of companies across the globe and is currently vice president of employee engagement strategy for BI Worldwide. His books have been featured in The Wall Street Journal, ABC’s News Now and CNBC.com.

The 12 New Rules for Managing Your Employees As If They’re Real People. 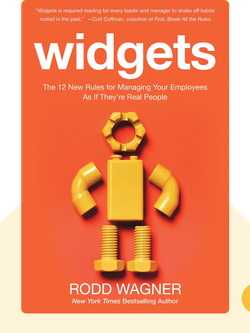 Widgets (2015) is a guide to improving employees’ performance, regardless of the field they work in. These blinks outline the fundamental principles, based on scientific research, that will help any company improve its efficiency, profitability and worker satisfaction.

The way employees are incentivized affects their energy levels.

Are you a morning person who tends to wake up energized and excited at the thought of going to work? Or do you dread hearing your alarm clock in the morning?

Either way, you’re certainly not alone. When it comes to energy levels at work, most of us fall under one of the four different types of employees.

The first group, comprising 19 percent of the US workforce, is called the demoralized group. People like this don’t like their jobs whatsoever and tend to feel that their bosses never give them positive feedback.

The second type is called the frustrated group. Accounting for 23 percent of the working population, they sometimes receive positive reinforcement from their bosses, but often have a neutral or negative opinion of their work.

Third is the encouraged group, which makes up 29 percent of all US workers. These employees see their jobs as good, but not great.

And finally, the energized group is the 29 percent of the US working population with the highest level of energy on the job. They tend to report extremely high levels of job satisfaction.

But why are so many workers unmotivated and tired on the job?

It’s in part due to the widespread view of humans as homo economicus rather than homo reciprocans.

Homo economicus is believed to be rational and motivated by money. So, if you want homo economicus to do something, you simply threaten him – with dismissal, for instance – and he’ll do as he’s told. This method sees humans as cogs in a machine that can be controlled with proverbial carrots and sticks.

The homo reciprocans, however, is defined by his tendency toward reciprocity. So, if you scratch his back, he’ll do the same for you – but will also reciprocate poor treatment. This style of management is more in line with true human behavior.

So, when employers wonder about why their employees aren’t engaging with their work, it often has to do with the way a boss treats his workers. If you don’t treat employees like individuals, they’re bound to become frustrated.

Start your free Blinkist trial to get unlimited access to key ideas from Widgets and over 3,000 other nonfiction titles. With bitesize text and audio, it's easier than ever to find the right ideas to transform your life.