Mind, Body and the Curiously Elastic Limits of Human Performance 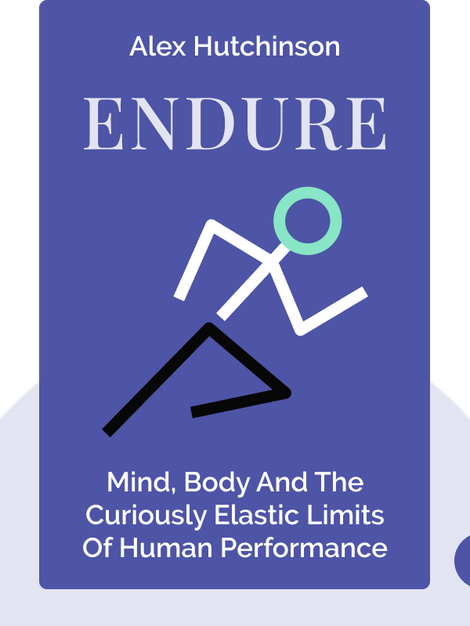 Endure (2018) takes an in-depth look at what enables certain boundary-pushing athletes to hit the wall of pain and effort – and still keep going. Alex Hutchinson examines the multiple and complex factors that allow marathon runners and cyclists to keep breaking records and reaching new heights in human endurance.

Alex Hutchinson is an award-winning journalist and contributing editor to Outside magazine. His work has also been featured in the New Yorker, the New York Times, the Globe and Mail and Runner’s World. With a PhD in physics from the University of Cambridge, as well as a true passion for the outdoors and running, he is uniquely qualified to research the science behind fitness and endurance.

Mind, Body and the Curiously Elastic Limits of Human Performance

Endure (2018) takes an in-depth look at what enables certain boundary-pushing athletes to hit the wall of pain and effort – and still keep going. Alex Hutchinson examines the multiple and complex factors that allow marathon runners and cyclists to keep breaking records and reaching new heights in human endurance.

Trying to test the limits of human endurance can have fatal consequences.

The British explorer Henry Worsley liked to test the limits of human endurance. Or perhaps it’s more accurate to say that he liked to push himself beyond the normal boundaries and set new limits.

One such boundary-pushing expedition began in late 2015 when Worsley attempted to walk across Antarctica all by himself. He made it a full 56 days before the journey began taking a dangerous toll on his body.

On the night of the 56th day, painful indigestion kept him from getting any sleep. So the next day Worsley tried to rest, but with 200 miles still to go, he couldn’t afford to take too much time off.

At midnight, with the polar sun still beating down upon him, he resumed his journey, the current leg of which involved climbing up the Titan Dome – a mountain of ice that peaked at 3,100 meters above sea level. Every step of the way, Worsley faced strong headwinds that drove sheets of snow against him as he gasped for breath in the thinning air. After 16 hours, Worsley had to stop for another break.

While Worsley was walking solo, he did have a satellite phone with him in case he had to call for help. This was something of a double-edged sword; it could save his life in an emergency, but it also gave him so much security that he was pushing his body far past any reasonable limit. Since his journey began, he’d already lost 48 pounds in bodyweight.

Remarkably, Worsley would last over another week before he finally used the phone to call his rescue team. At that point, he’d been walking for 70 days and was just 30 miles away from his goal.

The next day, Worsley was picked up and flown to a hospital in Punta Arenas, Chile, where he was quickly diagnosed with dehydration and exhaustion. But that wasn’t all. The doctors found signs of bacterial peritonitis, an abdominal infection that required immediate surgery – and things quickly took a turn for the worse.

The infection proved too much for Worsley’s weakened body, and on January 24, 2016, his organs shut down, and he died. This tragic death raised some important questions about the ethical and practical limits of such boundary-pushing expeditions.

It’s true that humans have safely returned from some unbelievable places, and in the blinks ahead we’ll look at the human body’s limitations, and why some feats are possible, while others simply aren’t.

Start your free Blinkist trial to get unlimited access to key ideas from Endure and over 3,000 other nonfiction titles. With bitesize text and audio, it's easier than ever to find the right ideas to transform your life.