A Hidden Tribe, Superathletes and the Greatest Race the World Has Never Seen 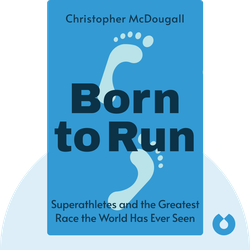 Born to Run (2009) delves into the human capacity for long-distance running. First-hand accounts, an encounter with a secretive ultra-running tribe and cutting-edge research combine to argue for the idea that we may well be born to run.

Christopher McDougall is an American author, TED speaker and journalist who has written for Esquire, New York Times Magazine, Men’s Journal, New York and Outside. He’s also acted as a contributing editor for Men’s Health.

A Hidden Tribe, Superathletes and the Greatest Race the World Has Never Seen 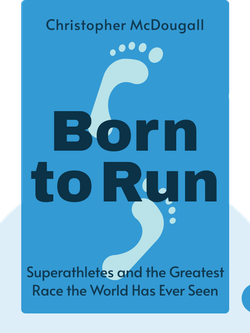 Born to Run (2009) delves into the human capacity for long-distance running. First-hand accounts, an encounter with a secretive ultra-running tribe and cutting-edge research combine to argue for the idea that we may well be born to run.

The human body is evolutionarily well-adapted to long-distance running.

When you think of fast sprinters, your mind probably jumps to cheetahs or horses. But when it comes to running long distances, it’s actually Homo sapiens who take the lead.

The reason? It’s in our physiology.

For one, humans are able to dissipate heat more rapidly than other animals.

Most other mammals don’t have the right glands in their skin to cool down via sweating, so their main method for releasing body heat is through breathing.

When four-legged animals want to run fast, they break into a gallop. This method of running, though quick, restricts their breathing rate because the moving leg muscles squish the animal’s lungs like bellows. As a result, when running fast, most animals can only breathe at a rate of one breath per stride.

This works fine for them – until they reach the critical limit at which they heat up faster than they can cool down. Then they have to stop running in order to survive.

We humans, on the other hand, prevent overheating by sweating through our skin. As a result, the human breathing cycle is not determined by our need to cool down, making it more efficient at procuring oxygen and maintaining endurance.

A second key factor that makes humans master runners is that we move on two legs instead of four.

When early humans began to walk upright – thus freeing their hands to use tools and reach higher hanging fruit – it allowed their throats to open and chests to expand. Though this development came at the expense of sprinting speed, this new posture and the increase in air capacity enabled them to maintain running over long distances.

Finally, our Achilles’ tendon is the third trait distinguishing humans as runners.

Some 95 percent of human DNA correlates with that of our close genetic relative, the chimpanzee, but even these primates don’t have this flexible, rubber-band-like cord of collagen tissue in their lower leg. As it’s stretched, the tendon stores energy until it’s ready to be released when the leg propels the body forward. This maximizes our endurance because it takes us less energy to spring from one step to the next.

Start your free Blinkist trial to get unlimited access to key ideas from Born to Run and over 3,000 other nonfiction titles. With bitesize text and audio, it's easier than ever to find the right ideas to transform your life.