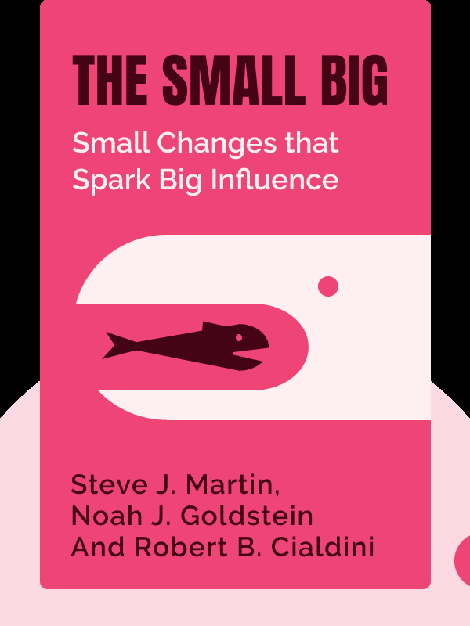 The Small BIG offers 52 examples on how minor changes in your behavior can make you more confident and successful when it comes to negotiating with and persuading others. Those who read this book will be able to draw value from the examples and make significant improvements to their persuasion style.

Dr. Noah Goldstein is Associate Professor of Management and Organization at UCLA Anderson School of Management and also holds joint appointments in the Psychology Department and the David Geffen School of Medicine. He has won awards in both teaching and research and was on the Scientific Advisory Board of two Fortune Global 500 companies.

Dr. Robert Cialdini is the most cited living psychologist in the field of influence and persuasion. His career has centred on researching the science of influence. He is the best-selling author of Yes: 50 Scientifically Proven Ways to be Persuasive. 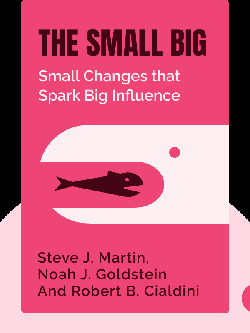 The Small BIG offers 52 examples on how minor changes in your behavior can make you more confident and successful when it comes to negotiating with and persuading others. Those who read this book will be able to draw value from the examples and make significant improvements to their persuasion style.

A few small changes in persuasion can have a big impact in getting people to commit.

Did you know that some simple, small changes can significantly alter how persuasive a message is?

More than a crafty tactic, persuasion is important, and lack of it can have costly consequences. For example, as a society, we lose a lot of money when we don’t fulfill our commitments. So persuading others to fulfill their commitments can be very beneficial.

One industry which suffers as a result of lack of commitment is health-care. A popular phrase in healthcare is DNA, standing for “Did Not Attend.” This is when we schedule an appointment but don’t show up. In the UK alone, the problem of DNA has accounted for a £800 million loss.

Governments and organizations are responsible for collecting funds in a prompt manner. Yet, due to late or absent payments, governments, organizations and customers alike are all charged fees.

Fortunately, even slight changes in the approach can have a surprisingly large effect.

You might think that if we were to offer people detailed information and a rational explanation on the subject, it would change their behavior. Take turning off the lights in an office, for example: a common approach is to give your co-workers reasons why it’s important to switch them off, such as cost efficiency and environmental friendliness.

But persuasion science studies tell us that these rational methods are likely to fail.

There is a better way to get workers to switch off their lights. It’s a small change that has a big effect: put a garbage bin under the light switch. This way, workers will be predisposed to flip the light switch as they throw out their waste when they leave the office.

This is just one of the small bigs that can effect people’s behavior.

As the rest of the blinks will show, these small bigs can also solve the aforementioned DNA problem and much more.

Start your free Blinkist trial to get unlimited access to key ideas from The Small BIG and over 3,000 other nonfiction titles. With bitesize text and audio, it's easier than ever to find the right ideas to transform your life.