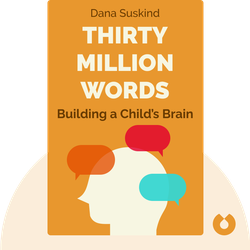 Thirty Million Words (2015) explains the importance of language in a child’s early development and long-term success. These blinks outline the optimal early language environment for a child and highlight the ways parents can help their children during these critical years.

Dana Suskind is a surgeon specializing in hearing loss and cochlear implantation. She is the founder of the Thirty Million Words initiative, a program focused on the critical importance of early language exposure on a developing child. 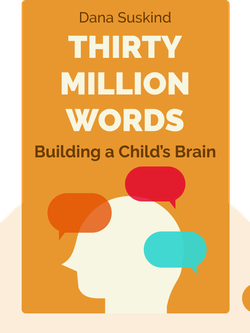 Thirty Million Words (2015) explains the importance of language in a child’s early development and long-term success. These blinks outline the optimal early language environment for a child and highlight the ways parents can help their children during these critical years.

The formation of neural connections during the first three years of life lays a foundation for future cognitive abilities.

From the moment you emerge from your mother’s womb, every single sound, sight and sensation you experience will affect the way you understand the world. This impact is especially palpable during the first three years of your life, during which time your brain’s neuronal network forms.

Unlike other bodily organs, the brain is incomplete at birth and functions like the architectural blueprint for a house. Everyone is born with as many as 100 billion neurons, which are initially unconnected, like telephone poles without the lines.

As these neurons become connected, they pave the way for increased brain function; during the critical years, from birth to three years old, between 700 and 1,000 new neuronal connections are made every second.

This complex wiring has an impact on every cerebral function, from memory to emotion to motor skills and language. However, the initial rapid forging of connections is chaotic and the network is gradually pared down to the essentials through a process called synaptic pruning.

Synaptic pruning removes extraneous pathways, culling those that are less used while fine-tuning the more specialized connections. The ability to alter these neuronal pathways, known as neuroplasticity, is never as great as it is during this period.

And that’s a good thing, because the brain development that occurs during these first three years lays the foundation for future intellectual capacity. Just take the acquisition of language: this ability to interpret abstract strings of sounds to form meaning requires profound intelligence.

In fact, a baby’s brain recognizes the specific sound patterns of her parents’ languages and strengthens these neural pathways, which will lay the foundation for speaking her native tongue. At the same time, the child’s brain will purge less frequently used sounds and pathways, reducing its ability to separate the sounds of a new language learned later in life. This is why many people struggle to pick up new languages as they grow older.

Start your free Blinkist trial to get unlimited access to key ideas from Thirty Million Words and over 3,000 other nonfiction titles. With bitesize text and audio, it's easier than ever to find the right ideas to transform your life.