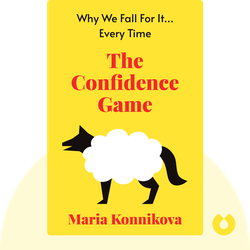 The Confidence Game (2016) reveals exactly how con artists can strike it rich by taking advantage of some major flaws in human nature. Find out why people believe incredibly unlikely stories and ignore incriminating evidence, and discover how basic human trust and optimism can be used to a con artist’s advantage.

Maria Konnikova is an author with a PhD in psychology. She is a frequent contributor to The New Yorker, writing about topics such as pop psychology and culture. She lives in New York City and is the acclaimed author of Mastermind: How to Think Like Sherlock Holmes. 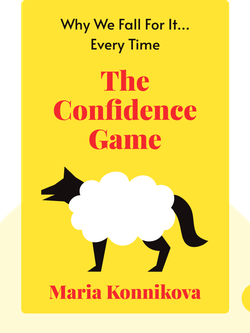 The Confidence Game (2016) reveals exactly how con artists can strike it rich by taking advantage of some major flaws in human nature. Find out why people believe incredibly unlikely stories and ignore incriminating evidence, and discover how basic human trust and optimism can be used to a con artist’s advantage.

Most of us prefer to know little about others, but con artists thrive on knowing all they can.

Have you ever sat in a café observing other people and imagining what their lives are like? You might think to yourself that the man sitting in a corner with the messy hair is actually a famous artist.

Most of us enjoy observing others, but we also tend to avoid finding out too much about them, as this deep knowledge can have its downsides.

For example, in one experiment, psychologist Jeffrey Simpson asked married couples to watch video footage of each other discussing a difference of opinion. While doing so, they were told to write down their own feelings and what they believed their partner was feeling.

At the end of the study, the couples were asked how they felt about their spouse and their relationship. It turned out that couples who were less successful at understanding each other’s feelings reported being much happier than those who succeeded.

This is because we tend to like people less if we can sense that they might find us boring, or if they are being insincere. Therefore, by keeping a safe emotional distance from others, we can prevent ourselves from seeing something we’d rather not.

On the other hand, understanding someone well enough to spot a flaw or a weakness in them is exactly what a confidence trickster, or con artist, loves to do. In fact, it is what leads them to be successful in their pursuits.

Take the case of Debra Saalfield: in July of 2008, Debra went to see a clairvoyant after losing her job and her boyfriend. Before Debra said a word about her problems, the clairvoyant closely read Saalfield’s body language and saw that she was very vulnerable.

This allowed the clairvoyant to expertly trick Debra into writing her a check for $27,000. If she had misread her client, the clairvoyant could have easily ended up in jail. Instead, she closely observed Debra and understood how to take advantage of her emotions.

But spotting a vulnerable person isn’t everything. As we’ll see in the next blink, a con artist must also be able to win their victim’s trust.

Start your free Blinkist trial to get unlimited access to key ideas from The Confidence Game and over 3,000 other nonfiction titles. With bitesize text and audio, it's easier than ever to find the right ideas to transform your life.