The Art of Better Negotiation 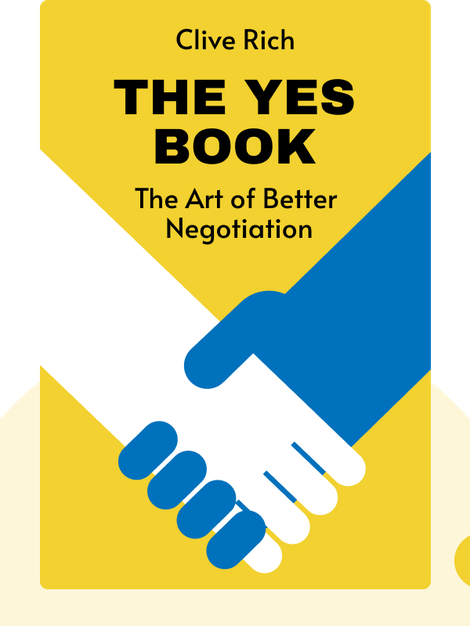 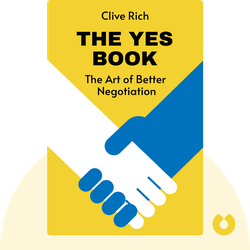 The Yes Book (2013) is your guide to negotiating. These blinks explain how modern negotiating is all about cooperation and offer actionable advice that will keep you advancing your goals during each step of the bargaining process.

Clive Rich is a digital-media and entertainment lawyer, mediator, arbitrator and creator of the app Close my Deal, which helps people hone their negotiation skills.

The Art of Better Negotiation 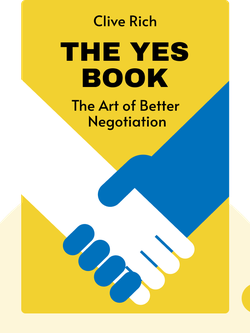 The Yes Book (2013) is your guide to negotiating. These blinks explain how modern negotiating is all about cooperation and offer actionable advice that will keep you advancing your goals during each step of the bargaining process.

The changing nature of business has transformed the style of successful negotiations.

Whether you’re working on a promotion for yourself or a deal on behalf of your company, bargaining skills are essential. There are a few central skills that will have you negotiating like a pro and you’re about to learn how to develop them.

But first, it’s important to understand how negotiating has transformed with time.

A successful negotiation used to be described as a process of wrestling your opponent into submission. For instance, when two warring nations would meet to agree on a peace treaty, the stronger military power of the two would essentially force the other into accepting their desires. The same was true for business negotiations when a large firm wanted to acquire a smaller one.

In the past, this approach has worked just fine for big businesses, since they tended to be less interdependent than they are today. Back then, forcing a rival or smaller partner out of the game might present a small setback – say, a financial loss in one quarter – but wasn’t sheer suicide.

But that’s all changed. Today, losing a business partner can cause long-term damage and serious financial loss.

That’s why current negotiations are all about satisfying every party involved. Just take firms like Apple and Coca-Cola, which produce, market and sell their products all over the world. This global presence means they’re more dependent on the cooperation of other firms such as materials suppliers or local marketing agencies.

Because of this, they must approach negotiations in an entirely new manner; they must strive for common ground and solutions that leave everyone feeling good. Instead of simply strong-arming others, they now have to sit down with smaller companies to gain access to their markets.

But that doesn’t mean bad negotiations are a thing of the past. It’s still important to actively prevent deals from going sour, and that all depends on the attitude you bring to the table – a concept you’ll learn about in the next blink.

Start your free Blinkist trial to get unlimited access to key ideas from The Yes Book and over 3,000 other nonfiction titles. With bitesize text and audio, it's easier than ever to find the right ideas to transform your life.