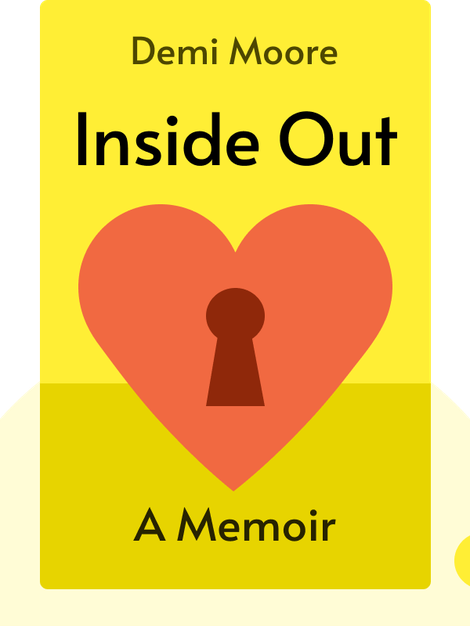 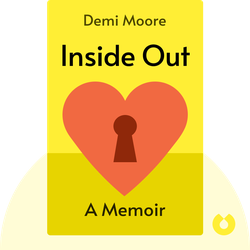 Inside Out (2019) is a memoir by Hollywood actress Demi Moore. Here, she turns inward and reports from memory – from her troubled childhood and her rising fame as a member of the “Brat Pack” in the 1980s, to her marriages to Bruce Willis and Ashton Kutcher.

Demi Moore is an actress, producer, director, and activist. She is best known for her roles in St Elmo’s Fire, Ghost, A Few Good Men, Indecent Proposal, and G.I. Jane. She is also the co-founder of Thorn, a non-profit that creates technology to defend children from sexual abuse. She lives in Los Angeles and Hailey, Idaho. 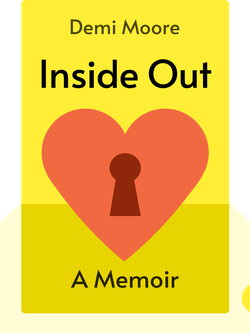 Inside Out (2019) is a memoir by Hollywood actress Demi Moore. Here, she turns inward and reports from memory – from her troubled childhood and her rising fame as a member of the “Brat Pack” in the 1980s, to her marriages to Bruce Willis and Ashton Kutcher.

Demi Moore had a turbulent upbringing – marked by illness and her parents’ relationship – culminating in a dramatic crash.

Demi Moore was born on November 11 1962, to a family that never stopped moving.

In many ways, it was the classic American story – a scrappy working-class family struggling day to day and just about makings things work. Her dad, Dan, was a newspaper advertising salesman, whose work took him, Demi’s mother Ginny, and their new baby Demetria from town to town.

When Demi was five, she was diagnosed with something called kidney nephrosis, a life-threatening condition about which very little was known at the time. By the age of fourteen she’d mostly recovered, but the illness was to recur throughout her early life. It even interrupted her schooling, requiring her to miss valuable class time as she followed a special treatment routine. Occasionally, she’d suffer terrifying attacks which made her body swell up.

While her parents loved her, they were only kids themselves, inexperienced and prone to quarrelling. Her father was also a serial philanderer, and whenever her mother discovered one of his affairs, she insisted that they move house to get away from “the problem” – the other woman. The family moved often anyway because of Danny’s job, so what little hope they had of a settled family life was shattered each time he cheated. Demi’s early life was a blur of new beginnings and sudden endings, new homes, new schools and new friends.

Finally, this cycle of infidelity and flight caught up with Demi’s parents. One night, when Demi was eleven, she heard a commotion coming from her parents’ bedroom. She rushed in to see her mother thrashing around and her father holding her down. By the bedside, there was a vial of yellow pills. Her father screamed for Demi’s help, and before she knew it, she’d jammed her small hand into her mother’s mouth and was clawing out the pills she’d swallowed.

It was a terrifying experience for a little girl to have gone through. But the incident taught her a powerful lesson: her parents couldn’t be relied upon to care for her. Her father’s infidelity and her mother’s suicide attempt demonstrated to Demi that her parents weren’t a foundation she could count on – she’d have to find that elsewhere.

Start your free Blinkist trial to get unlimited access to key ideas from Inside Out and over 3,000 other nonfiction titles. With bitesize text and audio, it's easier than ever to find the right ideas to transform your life.