Finding hope in the face of insurmountable odds 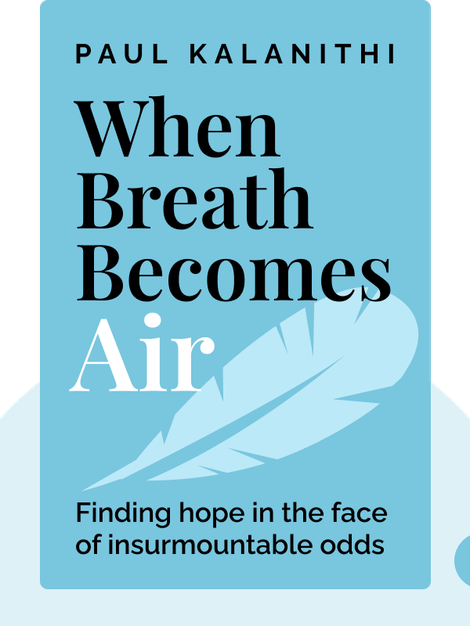 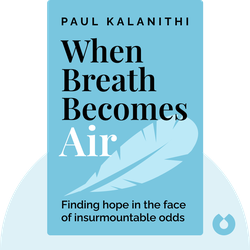 When Breath Becomes Air (2016) tells the incredible story of Paul Kalanithi, a neurosurgeon and neuroscientist who was diagnosed with and died from cancer in his mid-thirties. These blinks detail his extraordinary journey in search of the meaning of life in the face of death.

Paul Kalanithi was an Indian-American writer and award-winning surgeon. He attended the Yale School of Medicine and completed his residency at Stanford University. 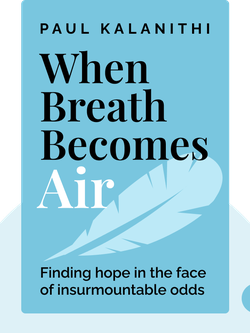 When Breath Becomes Air (2016) tells the incredible story of Paul Kalanithi, a neurosurgeon and neuroscientist who was diagnosed with and died from cancer in his mid-thirties. These blinks detail his extraordinary journey in search of the meaning of life in the face of death.

The author had two passions that persisted throughout his life: literature and neuroscience.

While he was growing up, the author, Paul Kalanithi, became obsessed with literary geniuses like Orwell, Camus, Sartre, Poe and Thoreau. It was this passion that informed his decision to study literature in college, but things turned out quite differently than he had planned. During the summer before college, he discovered another field that captivated him: human biology.

Kalanithi was getting ready to head off to Stanford when his then-girlfriend gave him a book by Jeremy Leven called Satan: His Psychotherapy and Cure by the Unfortunate Dr. Kassler, J.S.P.S. He was fascinated by Leven’s idea that the brain is just an organic machine that enables the human mind to exist, so he signed up for courses in biology and neuroscience.

Throughout his college career, Kalanithi continued to ponder big questions like, “what infuses life with meaning?”, looking to both literature and neuroscience for answers. Works of fiction remained powerful to him as he considered literature a manifestation of the mind’s life, and therefore of human meaning.

So, while meaning itself is certainly no simple concept, he drew inspiration from writers like T. S. Eliot and his work The Waste Land, which connects meaninglessness to isolation, and came to believe that true meaning lies in human relationships.

However, literature only offered one piece of the puzzle, and Kalanithi knew he had to keep studying neuroscience. He felt that, since the brain is the organ that enables the mind to exist, our ability to form relationships comes directly from our brains.

This perspective was informed by his experiences. While visiting a home for people with brain injuries, Kalanithi found that the patients weren’t entirely capable of forming relationships.

From there, neuroscience gave him a way to explain the laws of the brain, which were central to his understanding of meaning at large. Because of this fascination, he applied to medical school, but only through hands-on experience would he come to understand the true meanings of life and death.

Start your free Blinkist trial to get unlimited access to key ideas from When Breath Becomes Air and over 3,000 other nonfiction titles. With bitesize text and audio, it's easier than ever to find the right ideas to transform your life.