For the Record: How Wuhan Diary Charts the Start of the Pandemic

This fascinating first-hand account offers insight into what life was like in the Chinese city where the coronavirus crisis emerged.

In January of this year, when many of us in the Western world first learned about a mysterious illness in the Chinese city of Wuhan, a lone voice from the outbreak’s epicenter became an invaluable source of information for millions of people who didn’t know what to believe.

Fang Fang, a renowned Chinese novelist and life-long resident of Wuhan, set aside the book she was working on and began writing a public diary on Sina Weibo, a Chinese social media site similar to Twitter. From January 25th—two days after the lockdown in Wuhan began—until March 26th—when the Chinese government announced the lockdown would be lifted—Fang published 60 posts revealing the truth about the events unfolding in her city.

Despite Chinese officials’ efforts to censor Fang and portray her as a traitor to the communist nation, the author refused to be silenced. Even after the government deleted her Sina Weibo account, Fang found creative ways to continue sharing her daily essays with the millions of people who followed her online. And although Fang’s posts have since been removed from Sina Weibo, HarperCollins Publishers has recently translated them from Mandarin and compiled them in a book titled Wuhan Diary: Dispatches from a Quarantined City. 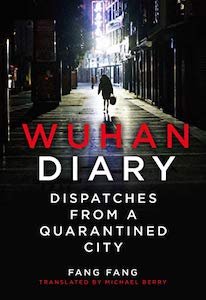 The key insights from Wuhan Diary are now on Blinkist, and they offer a fascinating perspective on life in the Chinese city as things ground to a halt. If you’re curious about the early days of the pandemic, Fang Fang’s book provides an intimate account of her reaction to the harrowing situation. Here are a few of the most resonant messages.

Both the government and the media dismissed the threat at first.

After the virus initially emerged at a downtown seafood market in the final weeks of 2019, the government downplayed the seriousness of the coronavirus—and the state-run media fell in line. Even in mid-January, when hospital beds were filling up with coronavirus patients and people were dying within days of becoming sick, officials insisted there was nothing to worry about. And even after the government sent a team to investigate the situation at Wuhan Central Hospital, one specialist, Wang Guangfa, was quoted as saying the virus was “not contagious between people; it’s controllable and preventable.”

Media outlets in China didn’t dig any deeper, and they continued to print and broadcast Wang’s words for several days, even as the number of cases in Wuhan rose dramatically. Local journalists continued to promote mass events in the city, including a government banquet with 40,000 attendees. The day following this banquet, however, Dr. Zhong Nanshan, an infectious disease specialist, announced that the virus actually was transmissible between people. At that point, officials could no longer deny the catastrophic nature of the coronavirus. And on January 23rd, the government finally acknowledged the severity of the situation and ordered a lockdown of Wuhan.

Roughly three weeks after the lockdown measures were announced, the combined efforts of the Wuhanese appeared to be making a difference. By then, the infection rate had slowed significantly, and the virus’s mortality rate had leveled off at around two percent. Fewer people with life-threatening symptoms were admitted into hospitals, yet the government insisted that Wuhan remain locked down until the situation was completely under control. Consequently, authorities tightened the quarantine order on February 17th, stating that only a single member of each household was permitted to leave their home to go grocery shopping—and they could only do so once each week.

“The enemy is not just the virus itself. We ourselves are also our own worst enemies in this fight.”
— Fang Fang

Following the announcement of the revised restrictions, the residents of Wuhan grew increasingly restless. They began to question the government’s slow response to the crisis, and they wondered why they had been lied to and who was responsible for the misinformation. This frustration peaked when Dr. Li Wenliang, one of Wuhan’s most respected physicians, died due to complications related to the coronavirus. Dr. Li was one of eight medical professionals who first raised awareness about the dangerous new disease—before the government silenced him. Following the doctor’s death, the people of Wuhan vented their anger and frustration on his Sina Weibo profile page.

When the lockdown finally ended, the people of Wuhan rejoiced.

In early March, nearly seven weeks after the lockdown went into effect, the situation in Wuhan had dramatically improved. At this point, the city was diagnosing fewer than 100 new cases of coronavirus each. Still, approximately 17,000 people remained hospitalized, and 5,000 of them were in serious condition. Even so, local experts agreed that the virus was finally under control for the first time since the pandemic began. Life slowly started to return to normal in Wuhan, beginning with the closure of mobile hospitals that opened early on in the crisis. Soon after, the city’s streets were disinfected, and public transportation resumed operation. The residents of Wuhan were overcome with joy to see life return to their city, and many of them returned to work for the first time since January.

“Lamenting our difficult lives, I heave a deep sigh and wipe away my tears.”
— Fang Fang

Wuhan reached a milestone moment on March 19th, when officials recorded no new cases of the infection for the first time since December. And there was more good news: the government had agreed to provide financial aid to low-income households affected by the lockdown. Days later, on March 24th, Fang wrote the last entry in her diary, concluding it by commending Wuhan’s people for their strength and fortitude. She also shared a few final thoughts with her readers, underscoring her belief that humankind needs to work together to overcome life-threatening diseases like COVID-19. Fang additionally expressed her frustration about the Chinese government’s tendency to conceal the truth, and she stated that several Western governments had also contributed to the loss of countless lives. Two weeks after Fang finished sharing her perspective on the pandemic, many of the restrictions in Wuhan were lifted. The 76-day lockdown was over, and the city’s people could finally resume their lives.

There’s more to explore with Blinkist.

“I never imagined that something so serious would befall the city of Wuhan.”
— Fang Fang

These are just a few of many takeaways from Wuhan Diary: Dispatches from a Quarantined City. The Blinks to the book offer a comprehensive overview of what life was like in Wuhan, while the full text paints a more detailed picture of exactly what transpired in the city on a day-to-day basis.

If you’d like to learn more about how pandemics work and what they have to teach us, Blinkist’s library includes numerous eye-opening books about how diseases have shaped our world. Dive into any of these books today, or explore the thousands of other titles in our ever-expanding library.