Why Your Next Hire Should Be a Designated Dissenter

We're often told to not rock the boat, but Jonah Berger advocates for bringing someone onboard to question conventional wisdom.

Whether it’s by comments on the article you’re reading, product reviews, or persuasive colleagues, you’re being influenced by the crowd nearly every minute of the day. And sometimes, this might work to your advantage. Foursquare uses the wisdom of the crowd to serve up luscious lunch recommendations, and a product with a thousand 5-star Amazon reviews might just be the best thing on which you’ve ever spent your hard earned shekels.

Other times, however, outside influences can lead us all astray—especially at work.

“There are some cases where the crowd is not actually wise, and it can lead us to make worse decisions than we might make by ourselves,” behavioral economist, author, and Wharton professor Jonah Berger told Caitlin Schiller on the Simplify podcast.

The tendency to conform is only natural because humans are wired to seek harmony. This also means, however, that a group of very intelligent individuals can lose track of their independent viewpoints with surprising alacrity, tumbling into a quagmire of unproductive, uncreative groupthink. Therein lies the negative side of influence.

“By not making room for independent voices,” Berger explained, “a group can end up making a worse decision.” 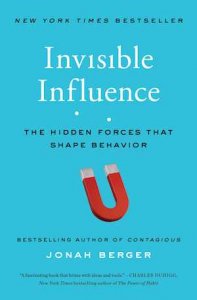 And so, Berger decided to write a book about how to break free of the forces that draw us into their bad-decision orbit. In Invisible Influence, which was published earlier this year, Berger identifies a smart, surprising way to bust up groupthink, and you can hire one from inside your company today.

“As long as everyone’s saying the same thing, well then it seems like a right answer and you should go along with the group,” Berger explained. “But if someone dissents, if there’s one dissenting opinion—even if they have a different opinion than yours—now it’s not a right-or-wrong answer, it’s a matter of opinion. And if it’s a matter of opinion, everyone feels much more comfortable sharing their own.”

Berger is quick to remind that influence is not inherently a negative thing, but a designated dissenter can be key in helping a group of good thinkers make great decisions.

Hear more about the designated dissenter and how to make the right decisions for yourself in Jonah Berger’s episode of Simplify.