How To Maximize Productivity With Mini-Habits

Did you know the best way to make a habit stick and maximize your productivity, is to do less, not more? This is how to make mini habits work for you!

Habits are confounding things. The more insidious ones derail your day, and even when you identify a good habit, making it stick can be a slog. In the 1950s, plastic surgeon Maxwell Maltz proclaimed that 21 is the magic number of days required to form a new routine. His decree swiftly became the rule of thumb. In 2009, however, health researcher Philippa Lally’s study said “Not so fast, Dr. Maltz.” Lally and her team of researchers found that, in reality, it takes more than two months—an average of 66 days, in fact—to become one with your new habit. 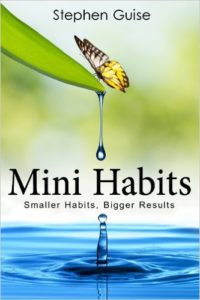 The study also found that how successful the test subjects were with habit adherence depended on the individual and on the type of habit, with the more demanding ones, like running for fifteen minutes before dinner, proving more challenging to keep up. This isn’t meant to be deflating news. On the contrary, habits can still be your greatest little allies on the quest for grand productivity. A way to make a habit stick, thus maximize your productivity, is to do a little less, exercising the least possible effort. Enter, the mini-habit, a concept coined by writer Stephen Guise in Mini-Habits: Smaller Habits, Bigger Results.

Mini-habits are routines with a ridiculously simple goal. For example, to read two pages of that report every morning, or to drink a single glass of water.

Although micro-goals might seem pointless, their achievability is what makes them so powerful. You need very little willpower to complete them, so chances of giving them up are minimal. Psychologically, they’ve got a lot to offer. The feeling of reaching your tiny goal every day offers a constant feeling of achievement, which is key to enforcing a routine.

1. Pick the right habits. Your mini-habit must be tied to something you actually want to achieve. For example, if you want to learn Spanish, you should set a mini-goal of learning one Spanish word a day

2. Create habit cues. A habit cue is a feeling or an event that reminds you to do your mini-habit. For example, every time that Spanish soap opera comes on, it might be time to learn that word of the day.

3. Track your performance. Use a fancy app like Coach.Me, or a simple calendar to monitor your habits. Reflecting on your daily achievement helps you keep your mini-habits, and develop them further.

Rome wasn’t built in a day (or even 66 of them). It was built brick by marble slab over years of consideration, amounting to the grand city you see today. If you fill your life with mini-habits you’ll be amazed how much more productive you will become and how much closer to your goals you will be.