Author Paul Jarvis on Why Enough is Enough

We speak to the author of Company of One about why when it comes to business, growth doesn't always mean great.

When startup founders pitch venture capitalists, the last two words they want to hear are “lifestyle business” — i.e. a perfectly sustainable company that’s unlikely to IPO and make the investors tons of tasty cash! But for many entrepreneurs, that may just be the right way to go.

In his new book, Company of One, author Paul Jarvis questions received ideas about business and success, and asks whether entrepreneurs might take a different tack — and end up happier as a result. We caught up with the author to ask him a little more about his philosophy and what it takes to build a company of one.

Being advised to keep business lean is common, but to keep it small is another thing entirely. Why do you push for the latter?

Smaller is sometimes better because it involves less stress, fewer responsibilities, and less is required. It’s faster to become profitable each month if expenses are lean. Size is associated with success, and success is associated with hubris… but hubris is the beginning of the end to success, typically. 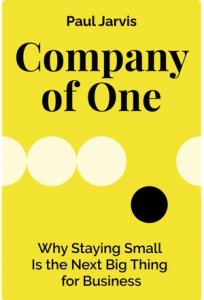 Research also backs up the idea that questioning growth is better than assuming growth in business is always good, always warranted, and always what’s best. The Startup Genome project found that 74% of businesses failed because they scaled too quickly. The Kauffman Foundation looked at the Inc. 5000 list 5-8 years later and found that two-thirds had either failed or shrunk significantly.

What’s your personal definition of a successful business?

I think success in business is personal. What I think is successful may not be what you’d consider part of your list. That said, for me personally, a successful business has the following ingredients:

Profit. If a business is not just generating revenue but creating profit, then it’s durable and can last into the future. Profit means the freedom to make choices that best suit the direction I want to take my company.

Retention. I’d rather have a small group of engaged customers who keep buying new things from me than continuously targeting new people to offset the churn of people who don’t want to keep buying. It’s faster, cheaper and more enjoyable to focus on retention over acquisition.

Values. I want to run a business I can be proud of, that keeps true to the values I personally hold as important.

Can you explain what you mean by growth limits and why they’re important?

Without upper bounds, nothing is ever enough. We decide where those upper boundaries should happen, which fall between covering your necessities and “everything, all of it, in perpetuity”.

Sometimes, with rapid growth from lower bound goals, we can see great and exponential success… for a short time. We can bite off more than we can chew for short periods, over-work ourselves or our employees and push hard. But that’s not sustainable, and worse, it can set up situations where it’s expected. For example, if a company without any upper bounds does an extra 40% in revenue in a quarter, then that pace will be expected (by shareholders, by executives, by anyone following along) the next quarter.

Studies have shown that once we reach a salary of about $50k per annum, income ceases to make us happier. What are your thoughts on this?

In fact, once one earns “enough” money from their salary, happiness doesn’t increase as salary does. Thankfully, we get to define our own “enough” as well. Sure, maybe money can buy some happiness, but only up to a point—like covering your basic needs to make sure there’s a roof over your head. I’m definitely happier having a roof over my head than not. But would I be happier if that roof was attached to a house with 3,000 extra square feet? Probably not.

This is why I look up to folks like Terry Pratchett. Up until he died his life never changed when his income did. He kept living in the same house he bought before he was loaded. He never got that fancy new car (he drove an old Volvo) or spiralled by buying a stylish robe (although he did always wear a stylish full-brimmed black hat). He sold over 85 million books and he didn’t change the way he lived in any real way since his first book sale. He believed in what he called horizontal wealth, which he talked about in his nonfiction book, A Slip of the Keyboard.

The vertically wealthy end up being owned by the stuff they acquire. Horizontally wealthy folks end up owning only their riches. It doesn’t mean they don’t ever spend money, but they do it thoughtfully, and in ways that will enrich their lives.

There’s been a more sustainable, less materialistic turn in consumer behavior recently. What do you think are some contributing factors to that trend?

Capitalism isn’t an immutable law, but simply something we collectively believe in. We collectively go to work, make money, and assume the more money generated, the better off we are—in both our businesses and our lives. This a narrative we can opt out of (and we are).

Our belief in a capitalist market creates two classes: the small minority of people who own massive businesses that are ever-growing, and the larger group of people who trade their work for money from the prior group. This difference in classes is essential to the operation of capitalism, because there has to be workers, and those workers have to be governed by someone who’s fiduciary duty is not to the workers but to growth in all directions for their own self-serving means and shareholders.

The workers become convinced that consumerism is the only path forward. But they’re convinced of this by that same small minority of people who directly benefit from their consumerism. It has to happen to keep the wheels spinning, the factories humming, the profits increasing. Under this hype of buy more stuff, is empty promises, when sometimes all we need is what we’ve already got. With more stuff comes more responsibilities, and more problems. In all honesty, most of the time we’d be better off and happier with less. Which on the other end would mean less work, less profit for the small ruling group of people and more free time (because we don’t need to make as much to cover our essentials).

The system has built an economy that seems to have reached a logical conclusion: consumers have grown tired of companies increasing their reach with average goods in huge quantities. Employees have grown tired of working for companies that are more focused on pleasing shareholders with quarterly earnings than creating stable jobs for their workers. En masse people are turning to working for themselves and the freelancer economy and employeeless businesses are booming and eating more and more of the jobs available.

Do you have any tips on how to switch off the workaholic mentality that the modern workplace trains us into?

Busyness is a horrible default state because it’s not sustainable. There are advantages to putting in the time and effort to master a skill, but there’s also a great need for balance. When workaholic tendencies lead us to turn sleeplessness into a badge of honor and work demands push health, family, and friends to the back burner, it’s definitely time to take a break.

On Apple’s television show Planet of the Apps, one contestant admits, “I rarely get to see my kids. That’s a risk you have to take.” Is it really? That kind of hustling, putting work above everything else, is inconsistent with the mindset of running a company of one—with working better instead of working more.

How can someone make a shift from an employee to a company of one?

First, I don’t think everyone should. It’s definitely more work to work for yourself because it requires doing the job of a worker and the job of the person running the business. That said, if you believe it to be worth it, then it definitely can be as it gives you much more freedom and autonomy.

If you’re thinking of making the shift, I’d say: go slow. You don’t have to walk into your bosses office, flip her the bird, and walk into your new entrepreneurial venture with all bridges burned. You can start small, start slow, and be intentional about it. Maybe you start a side project on the evenings and weekends. Maybe you start with offering services instead of products at first (because they’re quicker to start making money from).

Always think about what your greater purpose is. As I mentioned earlier, success is personal. If we chase someone else’s version, at best we end up with their life, at worst we feel like we failed at something we probably didn’t even want. So always check back in with yourself to make sure the dream you’re chasing is your own.

Thanks to Paul Jarvis for taking the time to chat with us. You can check out the key ideas of Company of One on Blinkist now!