Why Humility Might Just Be the Key to Creativity

In our world of personal branding, setting aside an egocentric mindset can help create works that speak beyond ourselves.

“How can they say that?” “How did they miss that?” “Don’t they see what I’m trying to do here?” “Why don’t they appreciate my style?” “How dare they suggest I change that?” “But that’s crucial to the point of the whole work?” “Why would they ask that? Isn’t it obvious?”

Why? Because submitting your work to a broader public—and receiving said public’s feedback—tests your nerves. And, it usually doesn’t matter if that public is just one person, a small group of fellow creators, your classmates at school, or anyone on the street who happens to pass by.

Your work is personal. It reflects your thoughts and feelings, some of which you didn’t realize you had. This inextricable level of involvement can produce pieces laden with personal meaning. When issues are brought up, it is natural to become defensive. After a while, though, you have to ask yourself, are you defending the work, or are you defending your ego? 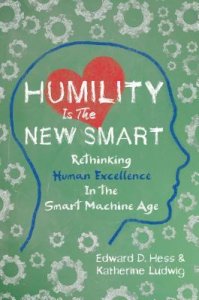 Humility Is The New Smart

Humility Is The New Smart

Edward D. Hess’s and Katherine Ludwig’s book Humility is the New Smart looks at humility in the context of the job market’s increasing automatization. And, part of Hess’s and Ludwig’s argument includes placing humility in the service of creative endeavors. By doing so, they argue, people will excel at tasks untenable for machinery.

While such days may still be somewhat distant, humility can still be a useful mindset right now.

But this does not mean bowing our heads and keeping our metaphoric tails tucked between our legs. To Hess and Ludwig, humility is more about being able to take stock of oneself and placing that assessment in the proper context. More often than not, we win this ability through trial, error, reflection, and guidance.

In the right setting and among the right group of peers, critiques provide the kind of environment where creativity can flourish. When the other members of the group say what doesn’t work about the piece on the table, it is not a rebuke of the person who created it. This can be difficult to acknowledge early on and it is common to push back. In listening to the feedback, though, it becomes clear the group wants the work—and the creator behind it—to succeed, to achieve the idea’s fullest potential. And, this requires humility as much on the part of the giver of a critique as the receiver. Such groups also become a haven of recommendations for other artists to discover and explore, through which one can continue to grow their creativity.

Finding such constructive cohorts can be a challenge, however. Sometimes it happens that everybody proceeds to tear down everything to shreds in the hopes that their own work stands above the rest. Such a milieu runs completely contrary to the spirit of both humility and creativity. It discourages more than it inspires.

And, in a recent episode of Blinkist’s podcast, Simplify, one of the topics that arose in the interview with improv-acting maestro Kelly Leonard was the need of both surrender and psychological safety to create effective teams (or, to use his preferred term, ensembles). Both these components require dialing back ego. Humility becomes a form of generosity, of shared humanity. In practicing it, we stand to improve ourselves and those around us.

The highly personal nature of the works we create also necessitates that we approach them with the open mind Hess and Ludwig describe as part of a humble outlook. Incorporating feedback while remaining true to your own vision is a tricky balance. Cutting well-liked passages and dialogue, or starting over on a work because of a realization combines feelings of sadness, anger, and frustration, among others. Sometimes, it’s enough to want to give up. Then there are the days that come later where it all seems to click, and one remembers why one took up said project in the first place.

It is not as though this is limited to the initial steps along a creative path. Name a well-respected artist and the chances are high said individual is or was constantly trying new ideas, and they have been or had been soliciting feedback from others. Said artists did not try and fashion a new style with each piece, but stayed receptive to new influences and the surprises of intuitive insights. Many times, these attempts did not work initially. Numerous sketchbooks and notebooks of famed individuals are filled with abandoned ideas at every stage of their career.

But, humility also asks us to remind ourselves that trying out new techniques is challenging, and we will often stumble at first. “Every beginning is difficult. All work, which deserves to be called such, is difficult,” says the character of Settembrini in The Magic Mountain. But, by acknowledging this difficulty as an opportunity to explore, rather than a flaw of character, we retain the spirit of humility and can avoid defining the path via the pothole.