Lonesome George the tortoise, Nigel the lovelorn gannet, Thomas the blind bisexual goose… animals give us the feels. But what are they actually feeling?

My mild obsession with lonely animals all started with Jeremy the garden snail. Jeremy couldn’t get busy because his shell coiled to the left rather than to the right like the vast majority of other eligible snails. So, researchers put out a call to find a mate for our counterclockwise hero and happily, two other sinistral snails were discovered. These potential love interests were then rushed to Jeremy’s keeper and University of Nottingham’s “resident snail expert”, Dr. Angus Davison. Jeremy’s streak of bad luck continued however, and the two new snails hooked up with each other instead. But it wasn’t all bad news for port-sided Jeremy. Before he died in October 2017, he did eventually manage to mate with one of the other lefty snails, producing 56 offspring.

Then there was Nigel the lone gannet on New Zealand’s Mana Island. And Thomas the blind, bisexual, polyamorous goose who spent his later years caring for the cygnets of Henry and Henrietta, two black swans that stole his heart. More recently, on Valentine’s Day 2018, Texan Global Wildlife Conservation teamed up with dating website Match.com and the Bolivian Amphibian Initiative to find love for Sehuencas water frog, Romeo — purportedly the last of his kind. The campaign succeeded in raising over $25,000 — $10k over its initial goal — and researchers will soon set off on an expedition into the eastern Andes forests to try and find a mate for Romeo.

As motivation for their mission, the scientists stated that they don’t want Romeo to meet the same fate as Lonesome George, the last Galapagos giant tortoise. George died sans offspring in 2012, taking the final hopes of his subspecies with him.

If there’s one common thread to all these stories, it’s that humans respond to anthropomorphization. We love nothing more than a story that reflects our deepest desires. Tales of animals with emotions that we more commonly — and probably quite arrogantly — think of as unique to our species tug at our heartstrings. We value the perceived plight of a plucky individual, but conveniently discount these possibilities when nameless animals hang out in plentiful herds. Add to that the incredibly fallible belief that when it comes to animals, the cuter it is, the sweeter it is. Newsflash: that adorable bushy-tailed squirrel will happily sink its teeth into a baby bird if it means that it’ll stave off hunger. And animals probably have a far more complex inner world than we give them credit for. 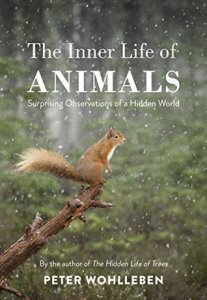 The Inner Life of Animals

The Inner Life of Animals

Late last year, Peter Wohlleben — author of the already wildly popular The Secret Life of Trees — released a new title, The Inner Life of Animals. He argues that, from an evolutionary perspective, there’s a high likelihood that animals are quite similar to humans on an emotional — and maybe even rational — level. So, did George and Nigel really feel lonely? Probably.

Humans share a massive part of our makeup with other mammals, particularly when it comes to the structures of our brains and nervous systems. Our emotions are also handled by evolutionarily ‘old’ parts of our brains, and crucially, parts that all mammals share. It follows then that we might experience similar emotional responses to our other mammalian counterparts. Take, for instance, the fact that nanny-goats and human women both produce the hormone oxytocin when they give birth to help them bond with their babies. When it happens to humans we call it love. Why do we consider other creatures to be so different?

Still, animals having emotions is somehow easier for us to digest than them having rational thought. As humans, we tend to — probably due to problematic, but no less ingrained, gendered stereotypes — place privilege on the thoughts of our rational side rather than the feelings of our emotional one. However, while we can’t divine the complexity of what happens in an animal’s mind, it has been proven that pigs can recognize the names humans give them, and ravens respond to those they give to each other. That requires some kind of rational cognition.

From reading this book, it struck me that so many of the arguments that humans use to discount the inner lives of animals are not that dissimilar to those used by racists and sexists to keep people who differ from them subdued — e.g. they have inferior minds, they don’t feel pain the same way we do. Whether you believe Wohlleben’s arguments or not is up to you, but this beautiful and scientifically-robust book is definitely food for thought.

So, was Jeremy frustrated as his southshell inability to find a mate for such a long time? Will Romeo be smitten if researchers manage to find him a female Sehuencas water frog? We can currently only guess at the level of complexity of their emotions, but there’s a high likelihood they feel more than currently accepted. If you do want to begin to understand animals’ capacity for thought, for emotion, for empathy, for altruism, for dreaming, or even to consider whether or not they might have a ‘soul’, check out the key insights from The Inner Life of Animals now on Blinkist. And if you find a left-coiling snail in your garden, give Dr. Davison at Nottingham University a call. Do it for Jeremy!