On Bitcoin, Bubbles and What Makes Them Burst

As the Bitcoin bubble threatens to pop, many people are worried. How do economic bubbles form in the first place? And do they always burst?

In 2014, the price of a Bitcoin was around $500, by the end of 2017, this had risen to nearly $20,000. Although prices have dropped somewhat in the following months, Bitcoin’s rapid rise as many experts to suggest that the currency has developed into a bubble. American economist, Nouriel Roubini, has even warned that Bitcoin is the “biggest bubble in human history.”

But, what does this mean? And why is it bad?

If we want to learn about what economic bubbles are, and what they lead to, we need to look back at history. By analysing the economic bubbles of the past, we can learn what the future may hold for Bitcoin.

According to historian Niall Ferguson, in his book The Ascent of Money, economic bubbles tend to follow the same process.

To get a better understanding of this process in action, let’s look in more detail at three economic bubbles from history.

Tulips were first introduced into Europe from the Ottoman Empire in the sixteenth century. Their bright colors proved popular with the wealthy, and they became a sought-after, luxury status symbol. Flowers with a non-lethal virus called “Tulip breaking virus” were especially desirable because they grew multi-colored, flame-like flowers.

Gradually, the tulip market began to boom, especially in the Netherlands, which had both the soil to grow tulip crops and the entrepreneurial mindset to sell them. Because the tulip season was brief — you can only move the bulbs between June and September — most trading in tulips was done on paper. Traders would sign futures contracts with growers to buy their plants at the end of the season.

According to the historian Mike Dash bulbs were trading for amounts that could “feed, clothe and house a whole family for half a lifetime.”

The market continued to steadily grow throughout the early seventeenth century. Then, in the mid-1630s, probably due to increased interest from the French market, prices suddenly started to rocket — a single tulip bulb could fetch hundred of guilders. Hundreds joined the rush, and the tulip bubble kept growing.

Of course, most of these tulip traders never actually saw their tulips. Most of the action centered around the selling of the futures contracts rather than the actual bulbs. At the height of the mania, a futures contract would be bought and sold around ten times a day, each time selling for higher amounts. According to the historian Mike Dash bulbs were trading for amounts that could ”feed, clothe and house a whole Dutch family for half a lifetime.”

Of course, it was pure speculation, and there was no way it could last. The price of tulips far outstripped their actual worth. Sensible investors cashed out, but many did not. In the end, the bubble burst at incredible speed. After no-one came to a tulip auction in Haarlem, the mania stopped and revulsion set in. Prices dropped like a stone; bulbs went from being worth an estate to an onion in a matter of months.

Never ask a murderer to run your economy

In 1715, Louis XIV of France died, leaving his country bankrupt. To revitalize the economy, the new head of the government, the Duke of Orléans, turned to his friend, the Scottish gambler, financier — not to mention, convicted murderer — John Law.

Law’s big idea was to introduce paper currency into France. He persuaded the government to grant him permission to open a bank, the Banque Générale. People would deposit money into the bank in gold and silver, and would issue paper money in return. Law was also granted the exclusive rights on trade with the French colonies in North America, through his company, the Compagnie d’Occident.

[In January 1719] the number of newly minted people even led to the coining of a new word for the wealthy, millionaire.

In order to finance the Compagnie d’Occident. Law sold shares which could be paid for using, amongst other things, paper money from the Banque Générale. Interest in the enterprise was further increased by talking up the potential profits to be made in developing French colonies overseas: just think how much money could be made from the animals skins of Canada, or the precious metals from the Mississippi?

Law’s innovative idea was the displacement which began the bubble.

People began to buy stocks, and then, mania set in. En masse, people clambered to buy shares pushing the share price up fuelling a boom. Shares went from 5,000 livres each in January 1719, to an incredible 10,000 livres by the end of the year. [In January 1719] the number of newly minted people even led to coining of a new word for the wealthy, millionaire.

And yet, the bubble was about to burst. Because shares could be bought using paper money, demand for the Banque Générale banknotes increased, and the bank obliged by printing more and more. Such a huge increase in the money supply led to inflation, and some investors began to show signs of distress: a few began selling their shares, demanding to take their profits in gold coins, not paper money. Although Law attempted to halt the slide, mass revulsion quickly set in. The share price plummeted from 10,000 livres in December 1719 to just 1,000 Livres a year later. Many investors were left penniless. Law himself was forced to flee France disguised as a woman, and he ended his days as a gambler in Venice.
The French economy never really fully recovered and lumbered from financial crisis to crisis eventually leading to the French Revolution.

Throughout the 1920s, the American economy boomed. Thanks to a wave of cheap credit, middle and working class consumers could purchase new brand new technologies such as automobiles or refrigerators. The increased consumer demand helped fuel economic growth and all kinds of industries, from steel producers to real estate developers, posted ever-increasing profits.

Prices declined so quickly that, by the time brokers had received a notification of prices via ticker tape, the actual prices had already dropped even further.

To get a piece of this economic boom, many people turned to the stock market. Hundreds of thousands of Americans took advantage of cheap loans to speculate on stocks and shares. As stock prices continued to rise, banks and brokers were more than happy to lend to them. As more and more people borrowed to buy shares, debt built up throughout the economy. Yet, as long as the stock market continued to grow, everyone was happy.

Of course, the US stock market had become a bubble, and some had begun to notice. By the end of the decade, the economy, in general, was beginning to slow down, and many experts warned that the stock market was massively overvalued. Following this, wary investors began selling in throughout 1929. Then, what began as a slow exit suddenly became a panic as revulsion hit. On October 24th, 1929 — Black Tuesday — the stock market collapsed by 11 percent. On the following Monday, it declined by another 13 percent, the day after by yet another 11 percent. Prices declined so quickly that, by the time brokers had received a notification of prices via ticker tape, the actual prices had already dropped even further.

Because the speculation had been built on debt, the results of the crash spread far and wide: banks collapsed, companies went bankrupt, brokers lost everything.

Due to government mismanagement of the crisis, the stock market continued to decline. By 1932 it was worth an incredible 89 percent less than at its 1929 heights. The crisis also led to the Great Depression. In fact, it wasn’t until the outbreak of the Second World War and rearmament, that the American economy, not to mention pride, finally recovered.

Of course, the lesson was learned. The financial system never again allowed itself to become overburdened with debt. Especially not in 2007. 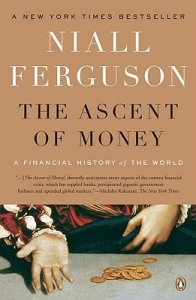 The Ascent of Money

The Ascent of Money

With each of these examples, you can see how a bubble grows and bursts. A market development, be it a popular new flower, a new form of currency or a credit-led economic boom, leads to market growth, slowly at first, before people flood in en masse. Those with experience generally get out when prices are still high, leaving those not sure or not quick enough to take the losses when reality finally hits.

The recent decline in the price of bitcoin hints that experts may be getting cold feet and that the bitcoin market is at the distress phase. Whether this leads to revulsion and collapse, or bitcoin manages to break the trend and stabilize is yet to be seen.