Stories from a South African Childhood

Born a Crime (2016) is about Trevor Noah's childhood and adolescence in apartheid and post-apartheid South Africa. A child of mixed heritage, Noah details the challenges he faced and the peculiarities that existed when he was growing up.

Trevor Noah is a world-renowned South African comedian, as well as a radio and television host. He has been hosting the Daily Show since September 2015, and has won numerous prizes, most recently the 2017 MTV Movie & TV Awards for Best Host.

Stories from a South African Childhood 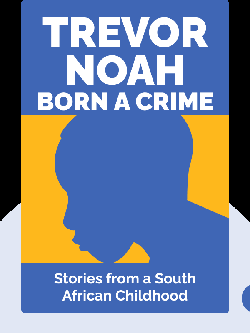 Born a Crime (2016) is about Trevor Noah's childhood and adolescence in apartheid and post-apartheid South Africa. A child of mixed heritage, Noah details the challenges he faced and the peculiarities that existed when he was growing up.

In apartheid South Africa, Trevor Noah's birth was a crime.

You’re no doubt familiar with Trevor Noah, the world-famous comedian who’s also the host of the Daily Show. What you may not know, however, is how extraordinary his birth and upbringing were.

Noah was born during apartheid in South Africa.

Apartheid was a system of racial segregation enforced in the country between 1948 and 1991 – a system whose roots stretch all the way back to 1652, when Dutch traders settled on the Cape of Good Hope and enslaved the indigenous peoples. When the British began to take control in the mid-1800s, the Dutch settlers – now known as Afrikaners – moved inland and developed their own culture. Once the British left, the Afrikaners took over and established a convoluted code of law and surveillance – stretching to some 3,000 pages – to suppress blacks.

One of these laws ruled that interracial sex was illegal. When you think about it, such a law was “philosophically” important to the racist system. After all, if sexual relations between races did occur, they would compromise the racist idea that it was unnatural for races to want to mix. Simply put, it would undermine racism and a racist system like apartheid.

Transgressors were imprisoned – men for up to five years and women for up to four. However, in practice, black men were often charged with rape if they had sex with white women. The crime was of such importance to the regime that special police units were tasked with spying through windows behind which illegal intercourse might be underway.

It was into this world that Noah, on February 20, 1984, was born. His mother was black and his father was white. By creating a baby, both of them had risked prison. Noah was, quite literally, evidence of a crime.

Start your free Blinkist trial to get unlimited access to key ideas from Born a Crime and over 3,000 other nonfiction titles. With bitesize text and audio, it's easier than ever to find the right ideas to transform your life.