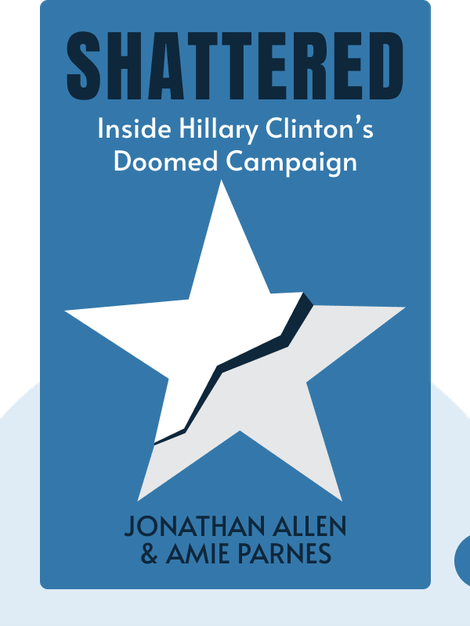 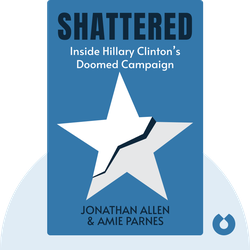 Shattered (2017) takes you behind the scenes of the 2016 US presidential election campaign of Hillary Rodham Clinton. In these blinks, you’ll learn what went wrong for Clinton and her team, leading a seasoned politician to come second to a reality TV star in a tumultuous and bitter race for the nation’s highest office.

Jonathan Allen is a journalist who writes for Politico, Bloomberg, Vox and the weekly political column Roll Call. In addition to his writing, he helps run the political news platform Sidewire.

Amie Parnes is the senior White House correspondent for the Washington, DC, newspaper the Hill, where she currently covers the Trump administration. 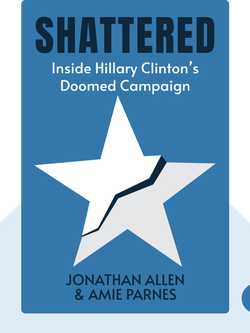 Shattered (2017) takes you behind the scenes of the 2016 US presidential election campaign of Hillary Rodham Clinton. In these blinks, you’ll learn what went wrong for Clinton and her team, leading a seasoned politician to come second to a reality TV star in a tumultuous and bitter race for the nation’s highest office.

Hillary Clinton had good reasons to run for president, but could never put together the campaign she needed to win.

In the lead-up to the 2016 presidential election, Hillary Clinton wasn’t sure about throwing her hat into the ring. After all, she’d been there and done that in 2008, losing the Democratic Party nomination to Barack Obama. That being said, there were some factors leaning in her favor.

For starters, Obama still had a good approval rating, and Hillary’s tenure as Secretary of State during his presidency had positioned her as one of the obvious choices to continue Obama’s legacy. But beyond that, after the elections in 2008 and 2012, the Democrats thought they would have a lock on the 270 electoral college votes necessary to take the White House.

People were referring to it as the Blue Wall, a series of states that had voted Democrat since 1992 and would assure the Democratic candidate the votes needed to win. Not only that, but Democrats also had a broad network of congressional politicians across the country, many of whom supported the Clintons and could turn voters out to the polls.

So, with these factors in mind, on June 13, 2015, Clinton publicly announced her candidacy for president. However, right from the start, her campaign lacked the strong narrative and inspiring message voters tend to look for.

In the end, successful candidates simply must put forward a message that’s both clear and compelling, one that tells voters precisely why they’re running for office. By contrast, Hillary’s first campaign speech was a mess; it was written by at least five different people, all of whom tried to shape it into something coherent. When it was finally delivered, the speech felt contrived and confused.

Some memorable lines that fell short were “America can’t succeed unless you succeed” and the insistence that she wanted “to make our economy work for you and every American.”

These lines fell flat because they were neither compelling nor memorable, but they also failed to shake the commonly held belief that Hillary felt entitled to be president, a problem her campaign would never overcome.