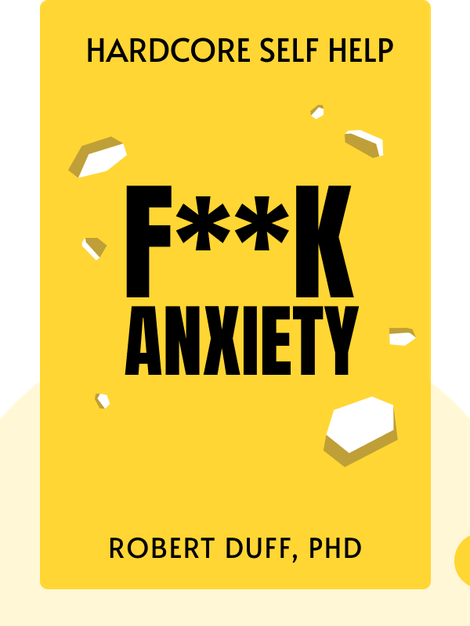 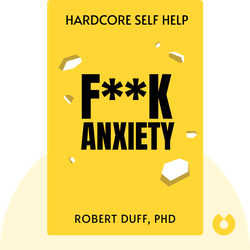 Hardcore Self Help (2014) is your guide to overcoming anxiety and living a peaceful life. These blinks examine some of the different forms that anxiety disorders take and offer some techniques to help ease anxiety.

Dr. Robert Duff is a psychologist on a mission to teach people about mental health in an accessible way. In addition to writing, he hosts a mental health podcast on his website, www.duffthepsych.com. 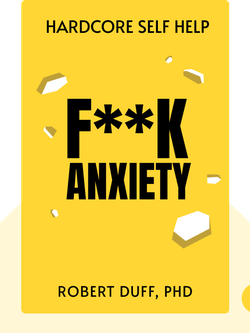 Hardcore Self Help (2014) is your guide to overcoming anxiety and living a peaceful life. These blinks examine some of the different forms that anxiety disorders take and offer some techniques to help ease anxiety.

Anxiety comes in different forms, and some are incredibly difficult to live with.

Do you experience heart palpitations and difficulty breathing? If you’re in otherwise good health, these symptoms might be caused by anxiety.

While anxiety comes in a variety of forms, these issues generally fall under the category of anxiety disorders, each of which has different symptoms. Everyone feels anxious at some point in time, but anxiety can also take much more serious forms.

Just take phobias, which most people are familiar with; they refer to disorders in which a specific situation or object, like a spider, brings on an overwhelming sensation of fear.

Another type of anxiety disorder is Post-Traumatic Stress Disorder, or PTSD, which can be the result of traumatic life experiences, like being abused as a child or going to war.

And then there’s Obsessive-Compulsive Disorder, or OCD, which is another anxiety disorder in which fear drives obsessions. The symptoms of OCD range from an obsessive need to touch particular objects at certain times, to personal tics that dramatically restrict daily routines.

So, there are many forms of anxiety and, with the help of a professional, you can determine which type, if any, affects you. If you do have an anxiety disorder, it’s essential to treat it, because anxiety can wreak absolute havoc when left to its own devices.

For example, PTSD can cause a patient to relive flashbacks of traumatic events, experience panic attacks and display sudden violent outbursts. The brain of a PTSD sufferer is essentially locked in fight-or-flight mode, which prevents her from living her everyday life, as even little surprises can cause tremendous anguish.

OCD also takes a serious toll on the patient’s daily life by forcing the sufferer to obsessively abide by particular routines to keep his life in order. As an example, an OCD patient might have an obsessive need to open and close the door 12 times before leaving the house. His anxiety may make him believe that if he fails to do this, his entire family will die a violent death.

These are just a few of the ways anxiety can rule your life – but it needn’t. In the next blink you’ll learn precisely how treatment can help you regain control.