Zuckerberg’s Year of Books in 5 Minutes: What you Really Need to Know About Gang Leader for a Day

Get to know one of Mark Zuckerberg's favorite book picks. Here are the most important and astonishing points from Sudhir Venkatesh’s Gang Leader for a Day, a sociological study of Chicago's The Black Kings.

You see them on TV mostly: nightly news, special reports, and of course, at the center of premium channels’ most-watched dramas. They’re not celebrities on the a list, or even b. They’re gangs, and they shape American culture in ways of which media makes us profoundly aware, and in other ways that people outside of a gang’s intricate system of influence might never even imagine.

Mark Zuckerberg’s third A Year of Books pick, penned by a scholar and sociologist who researched gang life from the inside for 10 years, goes past the typical stories from the evening news to reveal the inner workings of Chicago gang The Black Kings. We couldn’t hope to cover this entire book in a single article, but here, Blinkist Magazine brings you the newsfeed-worthy, made-for-conversation version of Zuckerberg’s selection to help inform your conversations about the book, and about violence, gangs, and how they’re shaping American cities.

A Year of Books Pick #3: Gang Leader for a Day by Sudhir Venkatesh 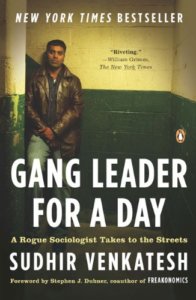 Gang Leader For A Day

Gang Leader For A Day

Gang life: specifically the life, times, and home of Chicago gang, The Black Kings. Sociologist Sudhir Venkatesh set out to investigate how gangs work by embedding himself in the tumultuous world of the Robert Taylor Homes, a South Chicago public housing project tightly intertwined with the local Black Kings branch.

Under the protection of gang leader J.T., Venkatesh spent the better part of 10 years recording the realities of life in the projects from the inside, debunking common assumptions about gang life, and cataloging the ways in which the gang impacts – defines, even – its community. By abandoning the clipboard-and-survey style of field work to get a little realer, Venkatesh revolutionized the way in which sociological research is conducted.

Sudhir Venkatesh, author and professor of sociology at Columbia University. Venkatesh has published pieces in the New York Times, The Chicago Tribune, The Washington Post, and is a regular at Slate.com. His stories have also been told on This American Life, WIRED, and NPR. Venkatesh was a University of Chicago PhD student for part of the time in which he wrote and researched Gang Leader for a Day.

1. The projects are brimming with entrepreneurial activity

Most women in the projects, for example, have some source of extra income: they might be psychics, offer daycare, prepare taxes, or perform sex work. Others sell candy or meals out of their apartments, or take in spare boarders. For men in the projects, even if they’re not in a gang, illicit earnings are still the main source of income. Some fix cars in the parking lot or sell scrap metal and stolen cigarettes. Others help tenants pirate gas and electricity for their apartments.

2. In many cases, gangs instate social order and a functioning community

In books and films, gangs are mostly sources of terror to their neighborhoods. While the portrayal is oftentimes accurate, it’s only part of The Black Kings’ story. At Robert Taylor Homes, the gang upholds order and protect tenants – guarding people’s property when they’re unable, and shutting down crack dens to keep people safe. Venkatesh has even seen gang members acting as escorts to the elderly and organizing sports tournaments and parties for the community. Perhaps most astonishing of all: the gang’s prerogative is actually to keep kids in school. In order to be accepted into the Black Kings, prospective members must strive to earn their high school diploma and are disciplined if they’re suspended from school.

In the case of the Robert Taylor Homes, that unexpected support comes from the building manager: a stout middle-aged woman named Ms. Bailey. Her role in the community is as ambiguous as the gang’s itself. Sure, Ms. Bailey procures money and goods (sometimes from the gang) for the tenants, makes sure that the Chicago Housing Authority (CHA) maintains the building, and looks out for the children that city agencies ignore. On the other hand, Ms. Bailey’s got her own entrepreneurial endeavors cooking and she knows that cooperating with the gang helps her to retain her power. She makes and follows her own rules – and they’re not necessarily tailored to the tenants’ best interests. She’s protected gang members from the police, accepted their bribes, and kept some of the cash intended for tenants’ needs to buy things for herself.

One smart fact from Gang Leader for a Day

Protection money might be the most important bill residents of a gang territory pay.

Since they took over in the 80s, The Black Kings have charged people for use of their muscle – and for the pleasure of having it not used on them. Venkatesh found that every tenant with some kind of business (and you might recall from the first point that that’s most of them) has to pay protection money to the gang. This extends even to an elderly woman who sells candies from her apartment and nets only about 20 dollars a week. The people who don’t or can’t pay with cash do so in bruises and fear.

One surprising fact from Gang Leader for a Day

Whatever you see in movies – chains, cars, and pricey electronics be damned – most gang members won’t ever get rich. In fact, the majority of a gang’s foot soldiers risk their lives for less than what the average McDonald’s employee makes.

If you remember only one thing, make it this

Gangs – and the affinities and aggressions of the people in them – are a delicately architected system that no amount of The Wire marathons can illustrate or explain. Gangs drain the lifeblood from a community, it’s true, but they also sustain that community and render services to it that no other infrastructure will dare: they run people to the hospital when the ambulance won’t come; they respond to threats of violence and offer protection where police cannot or will not tread. Gangs are far more ambivalent – and sometimes weirdly benevolent – forces than mass media portrays.

Even if you’re an armchair anthropologist, the topic of gangs and their impact on their communities, cities, and country is an important topic in today’s cultural conversations. Learn more by picking up Gang Leader for a Day in full to get educated. You can also read the book’s most critical insights on Blinkist in 15 minutes.