The Whole Story of Holacracy at Blinkist

Two years ago we started a crazy experiment. Disappointed with traditional organizational structures we wanted to explore new systems.

We started the experiment by applying core concepts of Holacracy with the goal of creating a more responsive organization that puts an emphasis on empowering individuals to operate with autonomy and distribute the power throughout the organization. We called our implementation of Holacracy Blinkracy. 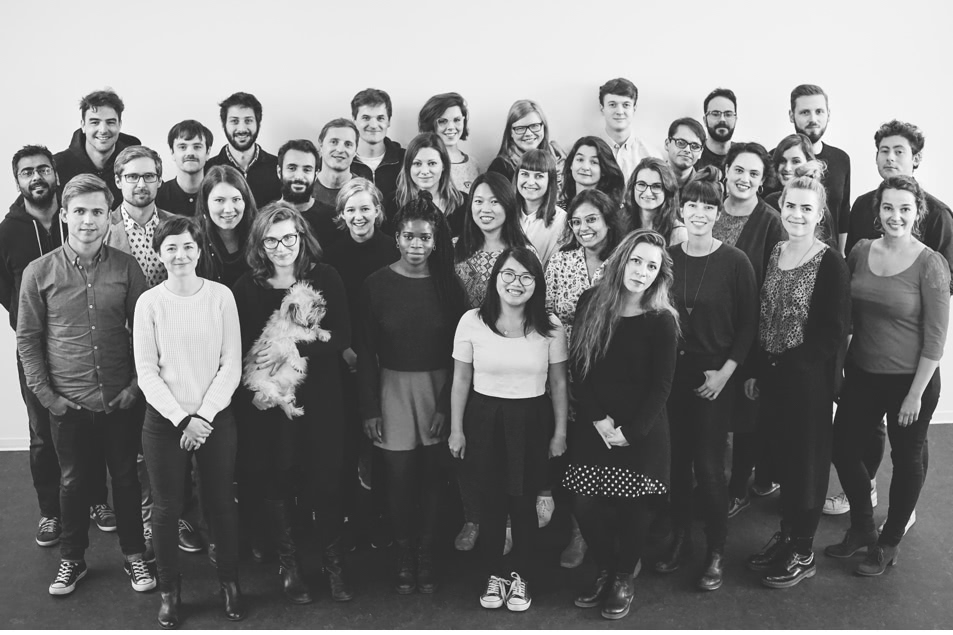 Holacracy did a lot to eliminate unnecessary hierarchies. It presented us with a streamlined structure that allowed us to focus on the job at hand. While parts of the system were complex or difficult to apply, Holacracy had a profound impact on Blinkist and continued to be an important part of the organization.

But 2016 was a crazy year at Blinkist. We tripled our revenue, doubled our team, moved into a larger, open-space office, and got a dog. We were doing a lot right. But as our team grew, we noticed the challenges Holacracy was creating for our organization.

One of the biggest issues we noticed was clarity.

While there was much about the system that was working, there were some flaws that were becoming more and more apparent. The biggest issue, we noticed, was clarity.

There were different interpretations of Holacracy and, in many cases, no common understanding of how we should approach certain things or who was allowed to do what. Where Holacracy did create clarity, it was itself rather inflexible and technocratic and felt too complex in some situations.

The term Holacracy itself became another challenge. Holacracy is both a concept and brand name. Everyone can read up on Holacracy online and develop their own interpretation of the concept. Often these articles do not correctly represent the concept of Holacracy and the idea becomes muddled with other terms such as democratic companies or cooperatives. This led to ambiguity. 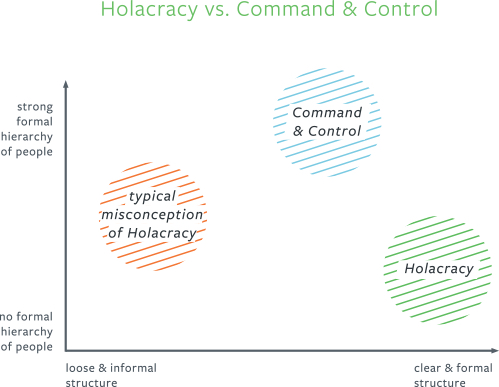 While some of the core concepts of Holacracy worked for our organization, it wasn’t a perfect fit in the long run

In the end the complex nature of the system and, admittedly, poor on-boarding to something that was fairly complex, left many with a partial understanding of only part of the system. This posed a particularly difficult issue as we grew. We needed to quickly fill a lot of roles — many of them in newly created circles. We saw tensions arise as we noticed how unclear it was, and the definition of distributed authority was tested.

It’s important to note that even with this unclarity, the organization functioned pretty smoothly. We noticed at this point that the power of communication really did make almost anything possible. This is when we realized that it wasn’t more structure that we needed, but less.

By the middle of the year it was clear that we wanted to change something. We still believed in our original goal of self management and distributed authority, in building a company that fosters self-organization and transparency, but Holacracy (or Blinkracy) wasn’t doing it, and so, we decided to move beyond Holacracy (and Blinkracy) to further focus on creating something that is tailored to our needs without carrying all the burden we found with implementing a complex external solution.

Culture at our Core

A big part of our culture developed as a result of implementing Holacracy, we didn’t want to make changes that would put our culture at risk. We needed to make a transition to something that worked better for us, not transform into a new organization.

Where most organizations would aim for more processes and policies, we realized we really needed fewer. We saw that what was actually enabling us to do great things was that we all wanted and believed in the same key elements. We started to believe that the best organizational systems are somewhat invisible (as opposed to Holacracy which we found to be very present).

When we set out to put what we truly believe in into words, we ended up with the following values.

Strive to Learn and Grow

We built based on these values, a set of guiding principles, and a few important processes. We identified which concepts of Holacracy worked well for us and kept them while reducing the parts of Holacracy that we felt were holding us back, or causing unclarity. 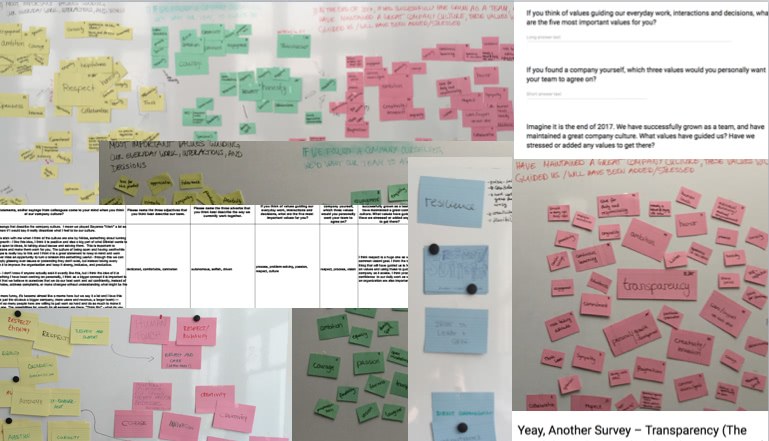 To identify core values took a lot of work, time, and input: around 200 index-cards, 45 asana-tasks, 8 iterations, 7 survey questions, 5 feedback rounds, and 3 workshops — to be exact

This shift made a clear distinction from Holacracy, where before processes and procedure had been at the forefront, we now needed a system that values people over process and is solely based around values and culture.

In short: Keep what’s working, and simplify the rest.

Our Own Operating System

Designing an organization is hard. It’s easy to get caught up in over-thinking structures and processes and create a monster that gets in people’s way and holds them back. This is exactly what we wanted to avoid.

When we started to develop something new we took some inspiration from computer operating systems. We liked the idea of creating something that’s only mission is to help us to get stuff done and to make the complex workings of the organization seem simple to those within it. This led us to creating the Blinkist Operating system, our own OS.

Where before processes and procedure had been at the forefront, we now created a system that was based around our values and culture.

The BOS created an effective framework with a solid documentation that leaves every team lots of ways to work and to figure out their own structure, routines and rhythms. In almost every aspect we used our team’s input to shape the system. The end result is intuitive, logical and clear.

In our pursuit of an innovative organization and smooth internal operations we could have stuck with Holacracy, increased our focus on implementation, dedicated the necessary hours, and made it work, but, we really didn’t need to. All of the additional rules and processes in Holacracy were simply more than we needed, and insisting on following them made us less productive and more caught up in processes than we wanted to be. We simply needed a system that gave us clarity and direction for our everyday work, and that’s what we designed.

Our experience with Holacracy — in general and as a concept — was positive, and Blinkist wouldn’t be the same company without it. It helped us grow our team from 4 to 40 passionate and self-driven people, to create a very unique and special culture, and to build a product that reaches more than one million people all over the world. 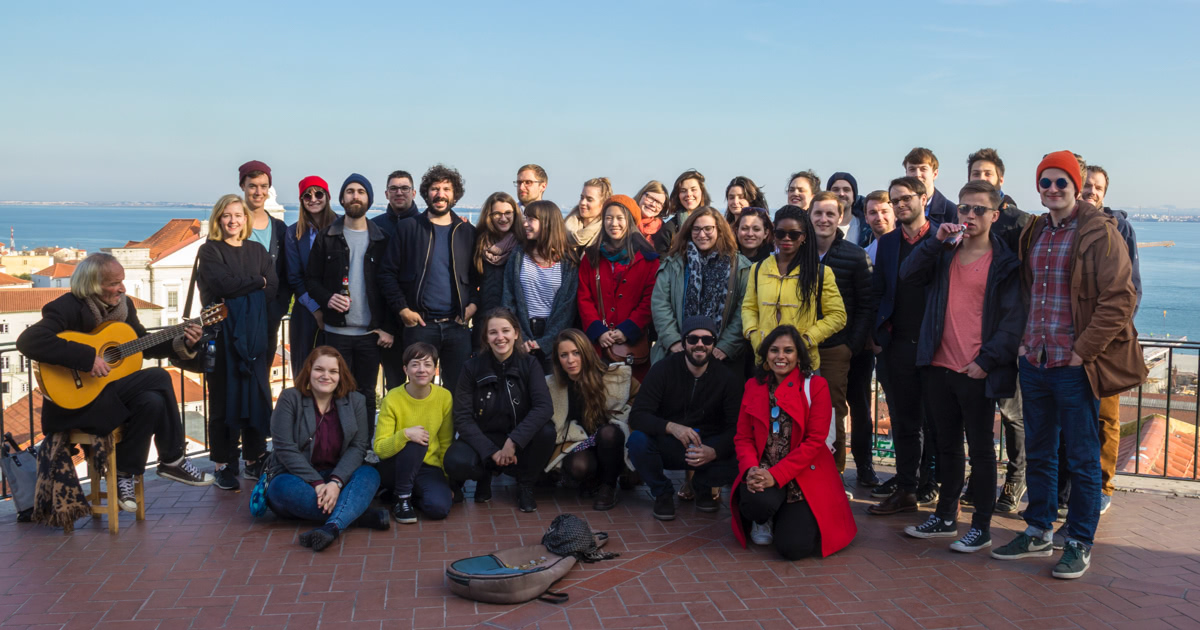 Holacracy gave us a lot, but sometimes, less is more. The BOS is exactly that.

Our next challenge is clear. Simply designing the OS isn’t enough — just as saying we will use Holacracy didn’t make it successful, or even true. Implementing the BOS throughout our organization will be a major initiative throughout 2017 and into the future as we grow our team. We realize that it is a process, not a single action that ensures understanding and success.

It’s scary, but as Holacracy would ask us, “Do you see any reasons why adopting this proposal would cause harm or move us backward?” 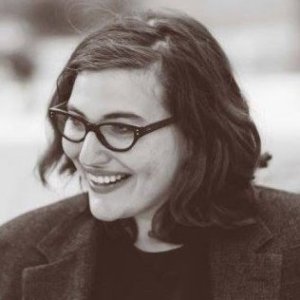 ABOUT THE WRITER
Molly Levinson

Molly Levinson is a New York native currently living in Berlin. She runs Internal Operations at Blinkist – working on all things from the office to the organization. When she isn’t at the Blinkist HQ she is most likely petting a dog.

@blinkist [email protected]
Start free Blinkist trial
A small investment, an incredible growth opportunity: Get access to powerful ideas from top nonfiction books and podcasts.
Start your free trial
Get the best of Blinkist
Upgrade to Premium now and get unlimited access to the Blinkist library. Read or listen to key insights from the world’s best nonfiction.
Upgrade to Blinkist Premium
Our Top 3 Reads: