Want to Change Your Life? Make Up Your Mindset

Can a person really change their mindset? Absolutely. Take a tip from Blinkist user Charles and learn how you can improve your life, everyday.

That’s what we learned from Charles, a Blinkist subscriber from Albany, Georgia, who responded to our call for videos about transformative moments in our users’ lives.

Charles recognized there’s a lot to learn in this world, but not nearly enough time to absorb it all. This realization left him feeling overwhelmed and a bit unsure about himself. Yet a simple sentiment from a friend shifted Charles’s entire outlook on self-education and empowered him to embrace the infinite bounds of our cumulative knowledge.

For Charles, the difference between becoming a scholar and becoming scholarly became an incredibly motivating force, altering his approach to life and transforming the trajectory of his future. By shifting his mindset, Charles realized he doesn’t need to feel intimidated by the breadth of human knowledge. He simply needs to commit to improving himself daily in order to live a successful and fulfilling life.

Though many of us fail to realize it, our fixed attitudes toward different aspects of life prevent us from becoming our best selves. And nowhere is this subject more thoroughly examined than in Mindset: The New Psychology of Success by Carol Dweck. In this title, the author encourages readers to liberate themselves from closed cycles of thinking and embrace a growth mindset to begin living life to the fullest. 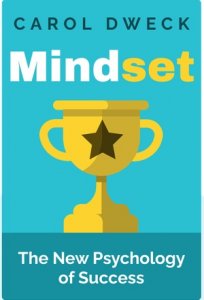 Our mindsets determine whether or not we believe we can learn and grow, and they play a critical role in how we perceive ourselves and others. Individuals with fixed mindsets believe themselves to be naturally gifted in some areas, but utterly incompetent in others. Alternatively, people with growth mindsets are convinced of their ability to become adept at anything they devote energy to. People in the latter group, therefore, are more likely to continue learning and evolving throughout life, whereas those with fixed mindsets will more often feel stunted or stuck.

A growth mindset means accepting that our world exists in a constant state of flux. Fixed mindsets, by comparison, tend to be more binary, and consequently more limited with regard to development. Individuals with fixed mindsets will often abandon an effort in the face of failure, while people with growth mindsets are more likely to embrace any challenges that come their way.

In her book, Dweck demonstrates how our mindsets are often influenced by our role models during childhood, yet that doesn’t mean states of mind are immutable. Charles is living proof that anyone can learn to adopt a growth mindset and begin accomplishing feats they once considered impossible.

Our individual abilities aren’t set in stone at birth. Every one of us has the power to learn, change, and grow throughout our lives. That’s where Blinkist comes in. Our app and ever-expanding library grant you access to a staggering amount of information you can consume anytime and anywhere.

If you’re feeling stuck in life, follow Charles’s lead make time to be more scholarly. Launch the Blinkist app today and dive into Mindset or any of more than 2,500 other titles at the tip of your fingers.