Become a Better Boss by Managing with Compassion

Managing other people is never easy, but by making a commitment to understand your employees’ perspective, everyone in the company will be better off.

Being a boss isn’t always all it’s cracked up to be, but when you find a value to bind your business to, it can have a transformative effect across your entire organization. That’s what Anoop learned while watching a documentary about an entrepreneur he admires.

Anoop is one of several Blinkist users who responded to our call for videos about transformative moments, and the documentary he’s referring to, Billions in Change, is about Manoj Bhargava, the creator of 5-Hour Energy, and how he’s using his astronomical fortune to make the world a better place. In the film, Bhargava explains how the prime directive within his company revolves around the absence of aggravation.

“Nobody gets to give us aggravation,” he says. “Whether it’s customers, vendors, or employees, if you aggravate, you gotta go. It’s that simple, because usually it’s the 1 percent that’s driving you nuts and taking up 80 percent of your business. So aggravation is the largest cost in business.”

While Bhargava’s approach might sound harsh compared to the adage about the customer always being right, he’s far from alone. In fact, some of the foremost authorities on management encourage all employers to adopt a similar attitude. 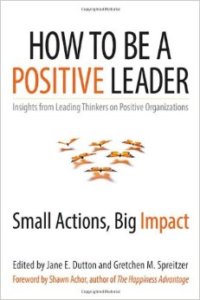 How to Be a Positive Leader

How to Be a Positive Leader

In How to Be a Positive Leader: Small Actions, Big Impact, the authors argue that zero-tolerance policies ensure positive work environments and lead to increased success. The book also includes oodles of advice about fostering positive organizational behaviors. Here are a few quick takeaways:

Employees are most motivated when they see the meaning in their work. When your team members recognize the role their efforts play in the big picture, not only will they benefit from increased satisfaction while on the job, but they’ll also be more likely to maintain a positive attitude outside of the workplace. This is win-win for the company and the individual, as it increases the employee’s intrinsic motivation, while improving the quality of their contributions.

Employees are happier and more effective when they can define their own roles. It should come as no surprise that the more control an employee has over the scope of their job, the more they’ll enjoy coming to work. That’s why companies that empower employees to craft their own roles tend to get the most out of their workers. In fact, studies show that employees who craft their jobs are absent less, perform better, and are more proactive than their cookie-cutter counterparts.

Employees appreciate ethical leaders, which leads to improved performance. Employees with ethical leaders are far less likely to engage in unethical behavior both at the workplace and at home. And when employees are treated well by their bosses, they’re more likely to pay it forward and treat others well too. These employees may also view such ethical leaders as role models, and in an increasingly transparent world, ethical leadership has never been more in demand.

Manoj Bhargava embodies many of the virtues explored in How to Be a Positive Leader, which is why it’s no wonder Anoop is inspired by the pioneering energy drink innovator. If you’d like to inspire the people you work with, start by exploring our blinks to How to Be a Positive Leader, or dive into any of the more than 2,500 other titles in our ever-expanding library. With topics ranging from management to marketing and sciences to social studies, there’s nearly no end to what the Blinkist app can help you learn.