Tasting Words: The Nonfiction Facts Behind This New Novel

For some of us, the prospect of tasting words or seeing emotions might sound ridiculous. For others, however, these interactions between the senses create their own augmented realities.

We’re all so dependent on our senses to get through life that it’s easy to forget to question them every once in a while.

After all, would I ride my bike to work every day if I didn’t trust my vision? How much harder would typing this article be if I didn’t have feeling in my fingers? Each of our senses allows us to experience a physical reality, essentially helping us navigate a world that is not inherently made for humans, and that is perceived differently by every one of us.

Let’s do a little thought experiment. Have you ever wondered what it would be like if two of your senses were combined? Try to imagine what the word ‘rain’ tastes like. Or how about picturing the color of the sound of a cello? This may sound like the pseudo-profound questioning of a stoner, but it’s not as silly as it sounds. Some people really don’t experience their senses in such a compartmentalized way.

Sarah J. Harris’ debut adult novel, The Colour of Bee Larkham’s Murder, tells the story of Jasper Wishart, a thirteen-year-old boy who has both synesthesia, a neurological condition often described as a joining of the senses, and prosopagnosia (also known as face blindness), a phenomenon which makes it impossible to recognize anyone’s face.

HarperCollins is celebrating the book’s launch with its first foray into podcasts examining the real-life facts behind the central narrative. The Colour of Bee Larkham’s Murder – The Podcast, delves deeply into the two central topics of Harris’ novel and Jasper’s world. In it, Harris explores synesthesia and prosopagnosia through conversations with young people who, like Jasper, also deal with these neurological conditions.

The term prosopagnosia, which comes from the Greek words for “face” (prosopon) and “not knowing” (agnosia) describes a cognitive disorder which undermines face recognition – including one’s own face – while other aspects of visual processing and intellectual functioning might stay intact. Even though prosopagnosia can be both congenital or acquired, there is still no official medical diagnosis of this condition.

Synesthesia is a neurological phenomenon wherein a sensory experience is triggered by the stimulation of another, different sensory experience. Think of it as a mash-up or a collage of sensations, occurring in unison.

In the novel, Jasper “sees a world of beautiful sounds.” However, synaesthesia is not confined to sound and sight. The sensations of synesthetes can be connected within all modes – sight, sound, taste, and touch, and are often driven by symbolic rather than sensory representations, such as letters, numbers, and words. Synesthesia is usually experienced in situations where the brain is under little external sensory input.

This is why Jasper can see “bright blue clouds” when his father begrudgingly speaks to him, or the “vibrant copper” tone of the officer interrogating him in the first episode of the podcast. Synesthesia paints the sounds of his world in a kaleidoscope of colors that no one else can see.

The ways in which we can experience synesthesia are as varied as they are bewildering. The occurrence of synesthesia can be traced to a single gene in our DNA, which, when it affects sensory areas in our brains, it heightens already existing connections between our senses. This is why some people can feel the taste of a word, for example, or see the color of emotions.

When this gene affects non-sensory areas in the brain, it allows you to connect seemingly unrelated things. This allows some synesthetes to have a greater ability to think and create freely within the realm of the metaphor — seeing the similar, within the dissimilar.

It is no coincidence, then, that many artists who are especially good at seeing the similar within the dissimilar, such as Vladimir Nabokov and David Hockney identify with this form of synesthesia.

In some cases, synesthesia can open a door to extraordinary musical capabilities. Musical synesthetes often embrace their condition as an integral part of their musical talent. Dr. Jules Montague, from the Royal Free London NHS Foundation Trust, describes the experience of musical synesthetes as multimodal, so “when they choose the choruses and bridges, they’re based on all of those connections we can’t see.”

Most musical synesthetes automatically see colors when they hear music, just like the composer David Caldwell, for whom each musical key, pattern, and mood has its own color. Color helps to enrich and clarify his musical endeavors because when the colors seem right, he knows he’s composing in the right direction. There is a long list of famous recording artists who acknowledge just how much their synesthesia helps them have a richer understanding of music, and their own work: Pharrell, Dev Hynes, Lorde, Charlie XCX, just to name a few. 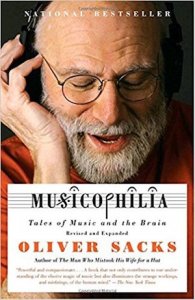 In his book Musicophilia, Oliver Sacks embarks on a journey to understanding the musical brain. The term musicophilia refers to a fundamentally human condition: the propensity for producing, and the desire to listen to music.

Music has advantages both for individuals and for society, serving both as a means of expression, and of bonding. Musicians and their brains have been thoroughly studied, with clear indications that, however different musicians’ brains might be from non-musicians’, it is nurture, and not nature, that solidifies these differences. This means that most of us are innately musical, synesthetic or not. It is through practice that some of us go on to become musicians and bless the world with contemporary masterpieces like Gucci Gang.