How to Stop Being Over-Responsible and Learn to Be Yourself

Host of The Baggage Reclaim Sessions, Natalie Lue, shares how to step away from being over-responsible for other people in order to better take care of you!

For as long as I can remember, I’ve been over-responsible. I’ve felt that I have to be strong and avoid showing ‘weakness’ by asking for help, expressing needs, or sharing my feelings. I’ve dimmed my light so that my brother, and then others, could shine and wouldn’t reject or abandon me for taking up too much space or making them feel inferior.

Thanks to a family who act as if they’re in a daytime soap opera, I know how to read a room and can feel tension shift in the air without seeing or hearing what’s going on. By the time I started school, I understood that it was my job to be a mind-reader and to be as pleasing as possible—even if it hurt. I felt it best to not be too good at anything and instinctively blamed myself for other people’s feelings and behaviour. Experience taught me that I could be in trouble or be the cause of an issue, even if I wasn’t there or had nothing to do with it. I learned that it’s my job to make people happy and that if I can do that, then I will be allowed to be happy.

Many of the people who struggle to forge and sustain healthy relationships, have confidence issues at work, and/or grapple with feelings of low self-worth are over-responsible. Whether trained or self-taught earlier in life, they’ve learned to be responsible for other people’s feelings, opinions, behaviours, needs, expectations, and desires.

Over-responsible people are people-pleasers who suppress and repress themselves to prioritise others and to minimise or eliminate conflict, criticism, rejection, disappointment and loss. They often do good things for the wrong reasons because, like me, they don’t know another way.

Over-responsible people are often the eldest or an only child, but wherever they fall in the family, they took on a role they felt was their ‘job’. They fulfilled and continue to fulfill this role long into adulthood because they want to do their part and ‘help out’. They also want to feel OK and get attention, affection, approval, love, and validation.

Sometimes people are taught by being told as a child that they’re responsible for something or someone. Even if there weren’t overt messages, parents or caregivers may have implied it. Sometimes, they taught themselves and assumed more responsibility because of a change in circumstances. Sometimes it can be a mix of both.

If you get blamed for something in childhood, you can learn to think you’re responsible for it even if you’re not. Inadequate parenting due to absence, chronic illness, addiction, codependency, abuse or neglect, make you grow up waaaay too soon.

You might feel as if you have to protect younger siblings or one of your parents or become a parent.

You might feel as if there’s no point in expressing needs if your parents/caregivers can’t/won’t meet them.

Maybe you think that someone else has bigger needs or that your parents have problems and inadequacies and being ‘low maintenance’ or ‘needless’ is your way of helping out but also protecting you from rejection. You might see certain things going on and decide to help out by being pleasing, never asking for anything, trying to be strong all of the time, and playing yourself down so that you can elevate a sibling or even one or both of your parents.

You might fend for yourself because your parents aren’t around very much and so you walk with a sense of aloneness. Perhaps bad things happened to you but you kept them a secret to keep the family together while destroying your self-esteem.

One day you wake up in adulthood and realise that you’re still in this role and that it’s costing you your emotional, mental, physical and spiritual wellbeing.

You may have felt old before your time so that by adulthood, you were worn out, and kept trying to get other people to take responsibility for you. Cue what might be a number of unavailable and possibly even abusive partners or other people in your life who you try to fill voids with. Odds are as well that you’ve tried to do this with people who you might not have realised allow you to play the role that you’ve become accustomed to playing.
When it feels as if there is no you because your feelings, opinions, needs, etc., are indistinguishable from someone else’s, you’re over-responsible.

When you’re mistreated in your relationships and blamed for your partner’s bad, sometimes abusive behaviour and you’re editing yourself down to try to appease them, you’re over-responsible.

When you grapple with chronic feelings of anxiety and dread because you’re convinced you’ve done something to upset the people around you, you’re over-responsible.

When you have a sense of aloneness because you don’t let people in and are afraid of not being strong and needed, you’re over-responsible.

When you’re not being yourself because you’re too busy taking care of everyone else and so running yourself into the ground, you’re over-responsible.

Be curious about the origins of your over-responsibility so that you can learn better boundaries for you. Doing so will allow you to give and receive love, care, trust and respect instead of sacrificing you and mistaking it for ‘giving’.

If you’re playing a role that you learned,, much as you’ve derived value from it, it’s causing you deep pain. Roles cut you off from yourself and they also cut you off from intimacy because you’re pretending to be something you’re not. They hold you back, doing their part in keeping patterns alive that need to be released for the benefit of everyone involved.

Forgive the little kid inside for what he or she didn’t know. Acknowledge the child you didn’t get to be. Endeavour to take better care of them by taking care of yourself. It’s critical to relieve your younger self of this role to set yourself free of the patterns of unhealthy relationships and situations that you’ve encountered.

Think about the role you have played within your family. What were the specific habits you’ve adopted to fulfil this role? What have you believed that it’s your job to be or do? How has this manifested itself in adulthood?

Remember that you can’t stay in this role just so that someone else can avoid their responsibility. It’s not your job to preserve a lie that when it all boils down to it, blocks you from love, care, trust and respect.

You can choose to be and do things that feel more authentic to you. In doing so, you can really begin to heal and stop the repetition of past hurts. Take care of you.

Want to hear more from Natalie Lue and The Baggage Reclaim Sessions? Check out the Shortcast of her show today in the Blinkist app. This article is a lightly edited version of Lue’s original blog post, Giving Up The Role of Being Over-Responsible. 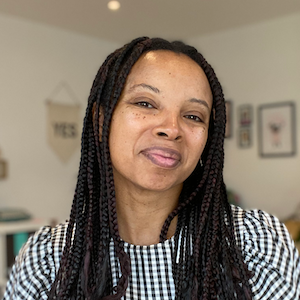 ABOUT THE WRITER
Natalie Lue

Natalie Lue is an author, speaker, and host of the popular podcast, The Baggage Reclaim Sessions—now a Shortcast in the Blinkist app. She seeks to help people let go of people-pleasing, perfectionism, and toxic relationships so they can become who they really are.