In this episode of Simplify, Michael Bungay Stanier tells leaders to get quiet, get curious, and get asking a few simple questions.

As a boss, or even as an employee, how often do you get told to be lazy? Never, we’d wager. Well, that’s going to change as of today. Coaching expert Michael Bungay Stanier explains how managers can have the most impact by being a bit lazier and more curious. You’ll even hear him try out his coaching techniques on Caitlin — a vivid example of why his book The Coaching Habit advocates that you say less and ask more.

“Sometimes even if you know what the real problem is and you even have a good answer, it’s not always the right thing to do to answer it.”

Let’s face it: the majority of us are advice-giving maniacs. It’s a habit we develop across a lifetime because often it pays to be the person with the right answer — or even any answer.

Sometimes however, even if you know the best solution, the key to unlocking someone’s potential is to shut up and listen. By the end of this episode, you’ll have learned about Bungay Stanier’s 7-question, 10-minute conversation strategy and how simply knowing what to ask can simplify life for you and the people you work with.

Michael Bungay Stanier is the founder of leadership consultancy Box of Crayons and the author of several books, including bestseller The Coaching Habit. He was the first recipient of the Canadian Coach of the Year Award, and was recently recognized as the #3 Global Guru in Coaching. On the way to founding Box of Crayons in 2002, Michael lived in Australia, England, the United States to finally settle in Canada with his wife Marcella. 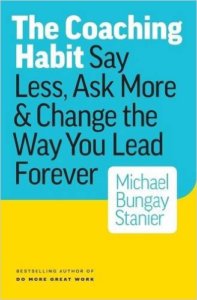 Simplify is a podcast for anybody who’s taken a close look at their habits, their happiness, their relationships, or their health and thought “There’s got to be a better way to do this.” We talk to bestselling writers, productivity wizards, sex geniuses, and happiness experts to find it for you. Life is complicated, but living it better doesn’t have to be. Simplify.

Simplify is made with love by Blinkist. Click here to try Blinkist free for 14 days with the voucher code: coachless

This season, we are collecting your voices, dear listeners (not as creepy as it sounds)!

Specifically, we’d love to hear how you would answer one of the questions we always ask our guests: “What have you discovered was much easier than you initially thought it was?”

You can just record your answer with a voice memo app of your choice and then email it to us at [email protected]. We are looking forward to listening to your responses, and stay tuned—you just might hear yourself on a future episode of Simplify!

If you want to say hi to Ben and Caitlin in the meantime, you can find them on Twitter: @bsto and @CaitlinSchiller.

Your hosts are Caitlin Schiller and Ben Schuman-Stoler.

Stellar research and production assistance by the outstanding Natallia Darozhkina.

Sound and editing by Ody Constantinou, who makes his own chairs out of materials he finds at the farmer’s market.

Michael Bungay Stanier’s training company, Box of Crayons is based in Toronto.

If you enjoyed this episode of Simplify and would like to go deeper into coaching and more, check out this list of books recommended by the coach of coaches, Michael Bungay Stanier himself.