Rethink Your Workweek: How You Can Hunt Down an Unbelievable Amount of Free Time

Ask a European returning from a US vacation how they found it and they’ll tell you breathlessly of Yellowstone, the surprising friendliness of New Yorkers, the bewilderment of options to be had in the cereal aisle, and the bounty of peanut-butter-flavored everything. And then they’ll tack on a variation of: “But, man, everyone’s always working.”

And it’s true! Or at least the world—America included—is under that impression. In reality, much of that moil is a matter of perception. In 2015, Americans worked an average of 35 hours per week. That’s more than the Czechs, but less than the Irish, and far less than the average Mexican’s 42.85 hours per week (and, according to some sources, 48!).

If the US’s relatively low number surprises you, you’re not alone. The fact is that people all over the globe think they work much more than they actually do. And it isn’t like we’ve all fallen into a time warp — the ego has reasons to keep us locked in the no-time lie. Believing we spend much longer hours at work than we do makes us feel accomplished and important, or at least importantly busy, to the extent that being busy has become the new status signifier of the century. Apart from a temporary bump in self-esteem, however, the payoff of being “busy” isn’t so sweet. 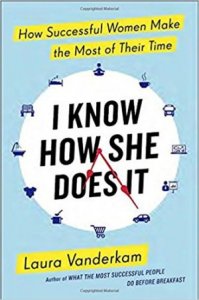 I Know How She Does It

I Know How She Does It

Writer and researcher Laura Vanderkam found that miscalculating our working hours messes with our ability to seize our time outside of the office. For her book I Know How She Does It, Vanderkam took a look at the timetables of hundreds of successful professional women to find out how they were using their time in and out of work. She discovered that, despite their high-powered careers, they actually had quite a lot of free hours to burn—67 hours of them, in fact! During an interview for the podcast Simplify, Vanderkam explained how she got to this number.

“There’s 168 hours in a week. So, if you’re working 45 hours and sleeping eight hours a night—that’s 56 hours––that would still leave 67 hours for other things. It seems quite possible to have a fulfilling personal life in 67 hours a week, because that is quite a bit of time. If we know that time is there, then it’s just a question of finding it, and seeing what we wish to do with it. ”

One way that Vanderkam says we can stop feeling overworked and starved for leisure is to quit architecting time at the office in murderous 10-hour chunks, and stop thinking of you-time as only a few hardscrabble hours on the weekend. Think, instead, in weeks.

“People always say there’s not enough time in the day to get to everything I want to do. Which is probably true. There probably isn’t enough time in 24 hours to get to everything we want to do,” Vanderkam explained to Simplify’s Ben Schuman-Stoler. “But we don’t live our lives in days, we live our lives in weeks. And when we look at the whole week, we can see that there often is enough space for what we want to do.”

Thinking of life—and everything we’d like to get done in it—in weeks rather than days is a seemingly simple prescription for finding more you-time, but it might take a bit of flexibility and creativity. For example, the professional women in Vanderkam’s research pool found that if they stopped working the standard 9-5, 5 days a week, in favor of a few 10-hour days, they suddenly had more afternoon time to spend with their children or on their own projects.

There’s no bending of time in Vanderkam’s technique, but by organizing life in weeks rather than too-short days, we’re liberated to take a really good look at how we spend our 67 hours of free time in the container that is the week.

Track down your own 67 hours by keeping a time diary. Write down what you do for a week, looking for unproductive patterns, and then assess whether or not you can ditch them. You might also see if you can free up an afternoon or two by clocking in some extra morning hours, or rethinking how you spend your weekend.

With a unit of time as expansive as a week, you’ve got plenty of opportunity to find ways other than being busy to feel productive and important, like finally writing that novel, taking a painting class, or whatever else might interest you. And if you’re not sure what that is yet, no sweat—you’ve got 67 hours a week to find out.