A Primer on don Miguel Ruiz’s The Four Agreements

don Miguel Ruiz’s bestselling self-help book, The Four Agreements, offers four tenets that promise to have a profound impact on your life.

Like the winds, the corners of the earth, and the seasons, many things come in sets of four. According to don Miguel Ruiz, this also applies to the moral cornerstones of your life. Ruiz calls them agreements, and when his book The Four Agreements debuted in 1997, it soon caught the attention of public figures like Oprah Winfrey.

The book’s translation into 46 languages showed that many were curious to find out more about the four agreements for themselves. With their emphasis on one’s relationship with oneself, it was natural to include Ruiz’s book with the other titles in the Blinkist library.

The Four Agreements’ continued popularity for over twenty years shows many are still curious to find out about Ruiz’s teachings, and the overview below casts some light upon each of the four agreements. 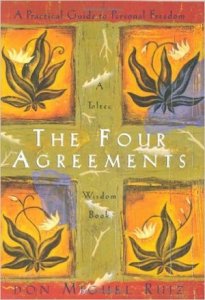 What are the Four Agreements?

Ruiz based the four agreements on the shamanic traditions of his ancestors, the Toltecs, a pre-Columbian indigenous people of Mexico. Though trained as a surgeon, he found that practicing medicine lacked a spiritual aspect. After nearly dying in a car accident, he trained as a shaman. The shamanic teachings on personal freedom formed the bedrock of Ruiz’s ideas for what the four agreements are:

These seem pretty clear at first, but there is a fair amount going on under the surface of each of them. Let’s take a look.

Agreement #1: Be Impeccable with your Word

The words we use function like the edges of a picture. They define what you and others can see in the resulting image. For this reason, Ruiz cautions his reader about what we say to others and think to ourselves.

“Speak with integrity. Say only what you mean. Avoid using the word to speak against yourself or to gossip about others. Use your power of your word in the direction of truth and love.”
don Miguel Ruiz

Maintaining this agreement with oneself is never easy. Though Ruiz considers it the most difficult of the agreements, he also says it is the most important to enact. Frustrations can make it easy to slip into self-criticism or self-pity or finding every fault in the world. Such a pattern of thinking exhausts the mind and deprives the thinker of the energy needed to live to the fullest.

Plus, it is easy to lose sight of how the words we use can affect others, intentionally or unintentionally. We all know of a time when a bad joke has made an otherwise nice time suddenly uncomfortable (or unleashes a twitterstorm), but this can also happen at smaller scales throughout the day. This makes the impeccability of our words all the more important.

Ruiz’s second agreement counsels us on how to behave, should we encounter someone who is not impeccable with their word or action. The Four Agreements says we should not let such moments weaken our sense of our own dignity and self-worth.

“We have learned to live by other people’s points of view because of the fear of not being accepted and of not being good enough for someone else.”
don Miguel Ruiz

The frame metaphor from earlier also helps us to understand the second of Ruiz’s four agreements. By not taking things personally, we do not let others define the frame with which we look at life or ourselves.

Ruiz extends his line of thinking around the second agreement to say that you have no responsibility for how other people treat you or talk to you. That burden lies entirely in the other person. However, there is a way to avoid potential misunderstandings and hurting others without meaning to.

Ever had someone upset with you because you couldn’t read their mind? Such is one reason assumptions are dangerous things.

“In any kind of relationship we can make the assumption that others know what we think, and we don’t have to say what we want. … A whole drama is created because we make this assumption and then put more assumptions on top of it.”
don Miguel Ruiz

Ruiz proposes two remedies to the issue of assumptions, clarity in communication and asking questions when you don’t understand something.

Speaking clearly about what you want helps both you and the person you’re speaking to. You have to take a thought that makes sense in your head and prove it can live on its own in the open air. Sometimes we come to a different opinion on a matter just by talking about it to someone. And they don’t necessarily have to say anything back to you.

Clearly communicating what you want also helps others to understand your needs. They may be able to help you themselves or potentially recommend other people you can talk to who might help realize your vision.

Agreement #4: Always Do your Best

“Humans punish themselves endlessly for not being what they believe they should be. They become very self-abusive, and they use other people to abuse themselves as well.”
don Miguel Ruiz

Maybe you slept poorly the night before or some bad news came in that day. There are many reasons why we cannot always be the absolute best versions of ourselves, but what matters is being the best version of one’s self allowed within the context of a given moment.

If the next day gives us the opportunity to be a better person, then we have a duty to do so. By focusing our energies this way, the other three agreements become easier to achieve.

Reception of The Four Agreements

With the endorsement from Oprah Winfrey towards the end of the 90s, The Four Agreements and other books by don Miguel Ruiz caught a foothold they have not slipped far from. Part of its success may come from the fact that many of the ideas in Ruiz’s book were similar to ones already present in Western culture. As Dr. John Johnson points out, The Four Agreements “could be a primer for cognitive-behavioral therapy.”

Ruiz’s agreements also share some similarity with ideas from earlier self-help books like Stephen R. Covey’s The 7 Habits of Highly Effective People. “Be impeccable with your word” echoes Covey’s proactivity towards interpreting what happens to you. “Don’t make assumptions” has a parallel in Covey’s “Seek first to understand, then to be understood.” Part of Ruiz’s success could be that his audience was already comfortable with these ideas. That they were labeled as Toltec wisdom gave it an exoticism that argued for their universal truth.

And, the continued presence of the self-help/personal development genre shows people still grapple with the same problems Ruiz was proposing solutions for. Titles such as You’re Not Listening, The Life-Changing Magic of Not Giving a F*ck, Brave, and Words that Work each speak to at least one of the agreements.

This is not to say that The Four Agreements offers a perfect solution. The second agreement, “Don’t Take Anything Personally” can be read in a way that removes virtually any responsibility one has for what they say or do. After all, if what I say only hurts because it pokes a sore that was already there, who am I to blame? It’s you that has something to fix, not me.

In the twenty-plus years since The Four Agreements appeared, we still wrestle with the same questions don Miguel Ruiz seeks to answer in his book. Our relationships with ourselves and other people will persist into the foreseeable future, and The Four Agreements offers a perspective on how best to navigate our daily lives. And this can be an aid and comfort in the face of uncertainty.