Powerlifting Champion Dr. Stefi Cohen on How to Find Your Passion Through Failure — and Determination

They say that quitters never win and winners never quit, but what if it’s a case that winners just know what to quit—and when? Powerlifting champion Dr. Stefi Cohen shares her unlikely advice to help you find your passion in life.

When we hear stories about success, they tend to revolve around perseverance. In the second episode of our new podcast, State of Mind, world record-holder in powerlifting, Stefi Cohen, tells a tale of determination that might not quite fit the mold of your typical success story. It’s a story about quitting, and about how knowing when to do so might be the key to finding your passion and being successful.

Stefi Cohen: An Athlete First — and Nothing Second

Stefi has always considered herself an athlete. Her love of sports, especially soccer, manifested itself from an early age. She was initially an underwhelming player, but her years-long commitment to rigorous training paid off. At 17, she was called up to the Venezuelan national soccer team, and she earned a scholarship to San Diego State University.

Though her greatest wish was to become a pro soccer player, her parents pushed her to pursue an academic career. San Diego was a rude awakening—despite having played at an international level with the Venezuelan national soccer team, she discovered she was far from being the best player in the university squad, let alone the best in the world. This realization led her to make a decision she was not used to making—she gave up. She felt lost, but she did not stop for long.

Quitting Was a New Beginning

As an alternative to soccer, Stefi took up running. Again, she went all in. She went to class, and she went for runs, without distractions. She ran marathons. However, here, too, she found it impossible to reach the top. She pivoted again.

In CrossFit, it seemed as if she had found what she was looking for. She progressed rapidly. A coach, impressed by her determination, decided he would train her to reach the Olympics in weightlifting. However, by this time, Stefi Cohen was pursuing a doctorate. Once again, she couldn’t handle her academic and athletic pursuits simultaneously. She needed to make a change.

You Can Find Your Passion in the Most Unusual Places

Stefi’s fiancé then introduced her to powerlifting. It was a sport that she could easily improve at, despite needing to prioritize her doctorate degree. After all the trial and error, she finally made it. Dr. Stefanie Cohen is currently the strongest female powerlifter in history. In 2018, she became the very first woman to lift four times her body weight. She is, officially, the best in the world.

“Getting to the top is easy, staying at the top makes you a legend”

Stefi was able to succeed because of her mindset. Her attitude, her experience, and the environment she grew up in helped pave her way to success. If you are wondering how to find your passion in life, Stefi Cohen’s story might be a good place to start.

To Find Your Passion, You Have to be Determined to Work Hard

Many accomplished athletes, artists, and entrepreneurs show an unwavering resilience in the face of adversity, and a relentless drive to become the best in their field. They keep going, even when the going gets tough, and this is what sets them apart from the rest. Stefi Cohen is no different.

In Outliers, Malcolm Gladwell seeks to find what lies behind the success of some of the world’s most accomplished people. He found that a combination of talent, dedication, and a fair share of luck, make up the recipe for success. A deciding factor is how much time you actually spend doing what you love. It might not take you long to find your passion, but it takes at least 10,000 hours of practice to excel at it.

To Be Successful, You Need to Learn and Adapt

Growing up, Stefi Cohen sought out help from sports coaches and school tutors whenever she needed to improve. She says that she “just understood the value of reaching out and asking for help.” She compares it to delegating tasks. With a support system of family, friends, and trusted mentors, she was able to focus on her academic career, while also dedicating her free time to weightlifting.

Another key element to finding your passion is learning to adapt. Adaptability to new situations, regardless of adversity, is the central theme of Stefi Cohen’s life story, and a key element of a growth mindset. In Finding Your Element, Ken Robinson presents the growth mindset as an understanding of skill as a development process, rather than a fixed state that cannot be improved. It means seeking constant, incremental development, as well as consistently trying new things, until you find your passion. With every new project, we gain valuable experience, contacts and knowledge we can put to use in our next endeavor. 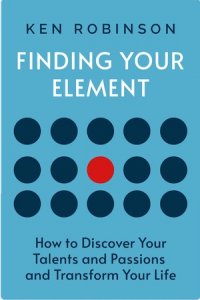 Learning Can Help You Find Your Passion in Life

Experimenting is important. We have to try different things in order to find our true passion. Starting a project and not finishing it is a natural part of this process.

Through failure, we learn important lessons about who we are. Constant learning is a key piece of the puzzle. Thanks to a hunger to achieve and sheer willpower, Stefi constantly pushed herself to try, to be patient, and to learn.

Blinkist is a good way to discover new ideas, new books, and to learn. State of Mind is a new podcast by Blinkist and Invisible Media featuring interviews that explore the personal stories, inspirations and unique mindsets that influenced the paths of highly successful people.