Elizabeth Uviebinené and Yomi Adegoke are showing young, British women of color how to take on the challenges they face in the modern world.

For young British women of color, finding relatable role models for personal or professional motivation can be a challenge. Not because these role models don’t exist, but because the work they do is rarely lauded in mainstream discourse.

Western society is largely built upon the utterly blinkered idea that if you work really, really hard you can be whatever you want to be, wholly discounting the challenges people face because of gender, race, and upbringing etc.

The combination of these two misconceptions has left generations of young women struggling to find public role models who look and speak like them. If it’s true that ‘you need to see it in order to be it’, then these young women have been done a major disservice. 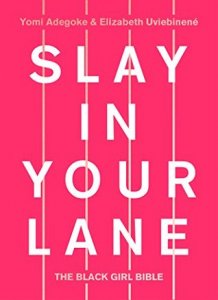 Slay in Your Lane

by Elizabeth Uviebinené and Yomi Adegoke

Slay in Your Lane

Enter Elizabeth Uviebinené and Yomi Adegoke whose highly-anticipated new book, Slay In Your Lane, upends this harmful precedent. The book is a collection of interviews with successful British women of color who speak about their lives, both personal and professional, the challenges they’ve faced along the way to becoming who they are, and how the world is changing.

By showcasing the considerable accomplishments of their interviewees, the authors hope to inspire confidence in the next generation of black women. The authors cram the book full of tried-and-tested advice and wisdom and don’t just tell young women of color they can do it because others have; they show them how they can do it for themselves.

Slay In Your Lane is far from being just a book of inspirational anecdotes, though there are plenty of those, too. It’s an invaluable resource for young black women looking for guidance to help them in their day-to-day lives.

The authors provide practical, hands-on tips on dating, health, money, the workplace, education, and more, that can be put into practice in a very tangible way. They draw directly from their own experiences of being young, ambitious, black women living in a world that more often than not uses meritocracy as an excuse for allowing racial and sexual discrimination.

They are refreshingly open about how society often refuses to take into account the disadvantages faced by different social groups and ethnicities out of a fear of being seen not to offer a ‘level playing field’.

The two authors recount specific situations from their own lives to illustrate these arguments as well as quotes, advice, and experiences from numerous other inspirational women. Thus, the two authors provide a host of potential role models for readers who can take courage from hearing their stories of their journeys to the top.

Speaking to Vogue about what inspired her to co-write the book, Uviebininé revealed her own frustration at the lack of black, British women role models out there:

“This book was birthed out of frustration. We had left [Warwick] uni and started our first jobs and I realized there were so many unwritten rules about getting ahead as a black woman at work. So I was reading books like Lean In and GirlBoss and while they are amazing, they just didn’t speak to the black side or the British element.”

They reached out to 39 successful black British women spanning a wide range of sectors, including space scientist Maggie Aderin-Pocock, author Malorie Blackman, DJ Clara Amfo, BAFTA-winning director Amma Asante and British Vogue’s publishing director Vanessa Kingori. It was working with all of these highly-acclaimed women of color that the authors were able to produce a book so rich in inspiration and experience for their readers.

“I hope that it helps to validate and articulate the experiences of black British women, not just to themselves, but to a world which often writes off their genuine concerns as a ‘chip on the shoulder’,” says Adegoke. “Even if there were a chip, no one ever enquires how it got there.”

Whoever you are, whatever your background, you need to read Slay In Your Lane now.