Why Are So Many People Struggling With Loneliness?

Social media apps seemingly bring us closer together, but today’s tech is also leading to unprecedented levels of loneliness.

Nearly everyone feels lonely at some point in their life. Whether it’s the result of being away from friends and family or if it occurs at the end of a relationship, loneliness is a seemingly inevitable aspect of the human experience.

And while it’s OK to feel alone from time to time, recent research reveals that loneliness can be lethal. Pair this news with reports that people in the US are experiencing more loneliness than ever before, and it’s clear that America’s isolation epidemic could lead to a lot of lost lives.

Can Feeling Lonely Really Be Fatal?

It can be hard to believe that loneliness leads to death, yet that’s exactly what a recent report by the American Psychological Association found. Here’s how it happens: Persistent loneliness causes stress, which increases the body’s production of a protein called fibrinogen. An excessive amount of fibrinogen can clog arteries, increase blood pressure, and make people more susceptible to heart attacks. In fact, loneliness has been proven to have as much of an impact on mortality as smoking 15 cigarettes a day, making it even more deadly than obesity.

Millennials are especially at risk of experiencing social isolation according to recent data from YouGov, which found that members of Generation Y have far fewer relationships than their forebears: 30% of respondents said they didn’t have a best friend; 27% said they had few close friends; 22% said they had no friends at all, and an astonishing 25% said they didn’t even have any acquaintances.

Why Are We So Lonely?

So what’s at the source of all this solitude? A recent study points the finger at social media. For all of the ways Facebook, Instagram, and other apps help humanity, that same technology is also undermining our ability to lead fulfilling lives. Yet, ironically, some people are attempting to assuage their isolation by further embracing digital devices.

Traditionally, people have found it possible to feel less alone by reading, exercising, or engaging in creative activities. Many members of modern society, however, are looking toward more tech-centric solutions.

Take, for instance, RentAFriend, an online platform that allows isolated individuals to pay locals for platonic companionship. Then there’s Carenote, a service that connects elderly Americans with friendly Filipinos who (for a modest monthly fee) will regularly call and text solitary seniors. And in Asia, elderly members of Japanese society are buying social robots as a means to cope with their loneliness. But are robotic roommates actually effective enough to stave off solitude? 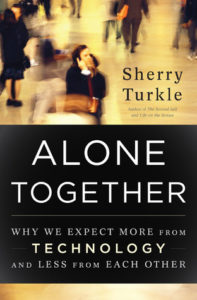 In Alone Together: Why We Expect More from Technology and Less from Each Other, author Sherry Turkle highlights society’s unhealthy relationship with social media and explains how such platforms can disconnect individuals instead of uniting them. As far as robots are concerned, Turkle details how bonding with today’s increasingly lifelike machines may alleviate feelings of loneliness, but certain people may eventually begin to prefer mechanical companions to their own friends and family members. After all, maintaining a relationship with a machine requires far less effort compared to the needs of their human counterparts, and modern robots never get upset, seek revenge, or grow bored with their owners.

As robots become more advanced, they’re increasingly likely to replace our relationships rather than enhance them. Turkle explains how this may lead some individuals to become so emotionally attached to their computerized companions that they could feel heartbroken when their machine inevitably breaks down.

Similar to social media, social robots ostensibly enrich our lives yet, in reality, they have the potential to increase feelings of isolation. Therefore, Turkle suggests that members of modern society back away from today’s technology, and instead reconnect with others on a more human level. And she’s far from the only author to suggest that lonely people could benefit from a digital detox. 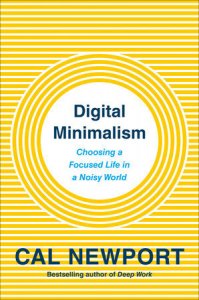 In Digital Minimalism: Choosing a Focused Life in a Noisy World, author Cal Newport explains how increased exposure to social media leads to higher levels of loneliness. To undo the ill effects of today’s tech, he outlines several methods readers can use to regain their focus and feel better about themselves by disconnecting from digital devices.

Newport notes that thousands of years of evolution have primed us to maintain intricate social lives — not to text, tweet, and tap thumbs-up icons while staring at a screen. He further explains how hashtags and emojis aren’t equivalent to meaningful human interactions and such forms of communication shouldn’t be considered alternatives to face-to-face conversations. In order to feel less alone, Newport advocates deleting social media apps, scheduling certain times to send text messages, and opting for in-person interactions as often as possible.

How to Make Friends Without Social Media

A December 2018 study published in the Journal of Social & Clinical Psychology found that reducing time spent on social media decreases loneliness and depression. But in a world where billions of people are constantly connected to online platforms, it’s can be easy to fall victim to FOMO even after mere minutes away from a smartphone. Yet despite the dominance of social media, there are still ways to learn how to meet new people that don’t involve scrolling or swiping on a screen. 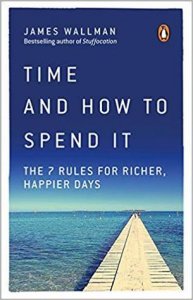 Time and How to Spend It

Time and How to Spend It

In Time and How to Spend It: The 7 Rules for Richer, Happier Days, author James Wallman explains how today’s multitude of media platforms are vying for our attention, and he draws on scientific research to help people make better decisions about how to occupy their free time. This includes a checklist readers can use to make new friends while spending time in beneficial ways.

Few people enjoy feeling isolated, Wallman notes, but by embracing activities that foster connections with others, it’s possible to avoid the potentially fatal effects of loneliness. He explains how the key to making new friends is finding fresh ways to connect with other people, which generally involves engaging in interesting activities and going on exciting adventures. This could include signing up for a recreational sports league or joining a group that loves to play board games. No matter what your interests are, there are almost certainly some like-minded individuals eager to accept you into their circle.

Begin by thinking about what activities you like to do, and then conduct some research to discover whether there’s a local group you can join. If you like to go cycling, for instance, there’s bound to be a biking group in your area. If, on the other hand, you prefer to read, find a nearby book club or create one of your own. You could also get more involved with your community to help plan local events or otherwise create a positive difference. And don’t forget that nonsocial experiences such as meditating, writing, and painting, can also reduce feelings of isolation.

If you’re feeling lonely, social media might be the reason why. The good news is that it’s possible to avoid the ill effects of today’s technology by following the recommendations of today’s leading authors.

To discover how you can make the most of your time and live a satisfying life without relying on social media, launch the Blinkist app to explore any of the aforementioned books or the thousands of other titles in our ever-expanding library.