What inspired a 19 year-old to come up with one of the most iconic horror stories of all time?

Frankenstein: The Modern Prometheus by Mary Shelley (1797-1851), published in 1818, is generally held to be the first science fiction novel. It has never been out of print and the myth of Frankenstein’s monster has been a pervasive one, becoming a cultural icon and generating many adaptations and retellings. Shelley was just nineteen years old when she wrote Frankenstein and the quest for knowledge at the core of this book reflects the author’s own scholarly interests.

The origin story of the book is almost as famous as the monster himself, born of a famous literary ghost story contest between Lord Byron, Mary Shelley, and her husband Percy Bysshe Shelley. Mary Shelley gave an account of the vivid nightmare and ‘hideous phantom’ from which the novel was born.

The daughter of two prominent intellectuals, Mary Shelley showed a passion for writing from a young age. Her mother, author and feminist advocate Mary Wollstonecraft (1759–1797), author of A Vindication of the Rights of Woman (1792) died a mere eleven days after her birth. Shelley’s maiden name – Mary Wollstonecraft Godwin – carried her mother’s feminist principles which were undoubtedly an important influence. 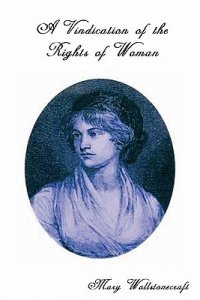 As well as reading her mother’s work, she would have been familiar with her father William Godwin’s book Memoirs of the Author of A Vindication of the Rights of Woman (1798) which gave her greater access to her mother’s life story.

Wollstonecraft’s A Vindication of the Rights of Woman argues that women have been failed by their education, and that it is society and culture that has weakened them. She argues that equality would benefit all. “There must be more equality established in society, or morality will never gain ground.” Her liberal thinking around gender and class equality impacted her daughter’s work.

William Godwin (1756-1836) was a political philosopher and novelist, and was responsible for much of his daughter’s intellectual education. The young Mary Shelley had access to his extensive library, a range of tutors, and attended lectures with her family. Her father’s circle provided a number of influences. She attended lectures by chemist Sir Humphry Davy, whose entertaining lectures and dramatic presentations of experiments showed chemistry to be a creative discipline. She heard Samuel T. Coleridge recite ‘The Rime of the Ancient Mariner’, a work she would later refer to in Frankenstein. She adopted her father’s habit of devoting a portion of each day to reading and research, and she also kept a reading journal. Her father described her as “singularly bold, somewhat imperious, and active of mind.” He influenced her not only in terms of education but also through his writing, particularly An Enquiry Concerning Political Justice (1793) a radical text suggesting that small communities rather than states could enact political change. The idea of the individual knowing their own needs best and not being served by their society or state is also present in Frankenstein.

Mary Shelley’s Creature also relates to Jean-Jacques Rousseau’s theory of the ‘noble savage’ showing that the innate goodness of humanity is corrupted by civilization and often by education. This echoes Wollstonecraft’s critique of educational systems that function to disenfranchise and weaken women. Shelley was familiar with John Locke’s tabula rasa theory – that when we are born our mind is a blank slate, we are not innately good or bad, but our nurture makes us so. Therefore the Creature is only a monster because society treats him as such.

Connections have also been drawn between Mary Shelley’s personal life and her novel. She wrote about how turbulence fueled her creativity: “The soul only enjoys” serenity “in passing” but it “constrains” the imagination “too much, so that it always comes back to the state it finds more suitable, a state of agitation.”

Shelley uses the frame of the Gothic novel to create a chilling tale about humanity, technology, and the corruption of power. It remains relevant today as we grapple with new technologies, however, the ultimate evil in Frankenstein is overreaching and over-ambition. She also critiques unjust governments, showing the negative impact they have on individuals. The technological and scientific side of the book reflect her early education of attending lectures by the leading thinkers of her day. Science was only emerging as a field of study at the time, as a teenager she would have witnessed philosopher Dr Luigi Galvani’s demonstration of passing an electric current through the nerves of a dead body, an experience which can be directly seen in Frankenstein.

Thus, not only is Frankenstein an enduring cultural myth and the genesis of science fiction, it is also a record of an incredibly learned and strong-minded woman’s education and her engagement with the thinking and issues of her time.