The Life-Changing Magic of Failure

How hitting the wrong note can also help you hit home runs.

No one likes making mistakes, but falling flat on your face in front a captive audience can instantly elevate you to a whole new level of humiliation. Yet that doesn’t mean failure can’t forge you into a more exceptional individual. That’s what Jeff from Massachusetts learned after crashing and burning during one of the most important moments of his life.

Jeff is one of several of Blinkist users who responded to our call for videos about transformative moments in our readers’ lives. Jeff’s experience with failure first left him feeling deflated, but after he gained some perspective, he realized he could use this setback as a springboard for success.

That’s also the core message of Failing Forward: Turning Mistakes into Stepping Stones For Success by author John C. Maxwell. This book provides a positive perspective on failure by highlighting the career catastrophes that led to some of history’s most legendary success stories. The memorable anecdotes related in Maxwell’s book delve into the importance of failure, the benefits of embracing it, and the power of leveraging mistakes to incite personal growth. Ultimately, the book inspires readers to take steps forward despite prior disappointments. 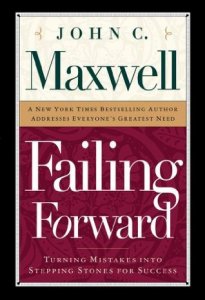 Many of us are brought up believing that failure is the opposite of success — or it’s at least an obstacle standing in the way of achieving it. In truth, however, failure is a necessary piece of prosperity and one that should be embraced instead of avoided. Failure empowers us to become stronger individuals. It’s an essential aspect of personal progress. In fact, the majority of today’s successful professionals attribute their own advancement to an ability to persevere in the face of failure.

Don’t let past failures stand in the way of your success. Accept personal or professional setbacks and view them as mere stepping stones on your journey toward a more lucrative life.

To help you overcome your perceived failures, focus on these five takeaways from Failing Forward the next time you don’t quite live up to your own expectations.

Failure opens up new opportunities. While we largely assume failure can only lead to negative outcomes, the opposite is often true. In fact, many lucrative opportunities emerge from perceived failures.

Accept blame for failures and responsibility for successes. Failures frequently result from factors we can’t control, so refrain from blaming yourself, and instead assume accountability for finding new solutions.

Supercharge your success by transforming failure into knowledge. The only way to learn from failure is to understand it, so in the wake of an upset, make time to investigate what went wrong. This reduces the likelihood that you’ll make the same mistake again and assists in the in the identification of what failed in the first place

Ensure success with crystal clear goals and an upbeat attitude. Embracing failure opens new opportunities, and setting goals creates a platform for a positive mindset. Channel this desire for change into well-defined objectives, and establish goals that allow you to live a more fulfilling lifestyle.

Jeff learned it’s not failures that define us, but how we confront them can affects the trajectory of our lives. So although failure may be inevitable, minor hiccups rarely mean it’s the end of the road. More often than not, disappointing performances uncover fresh ideas and create additional opportunities to succeed.

If you’d like to learn more about the surprising benefits of failure, explore the full set of blinks to Failing Forward or dive into any of the more than 2,500 other nonfiction titles in our ever-expanding library.