Yes I Will Yes: How To Read That Challenging Book

Difficult works often put us off, but by learning how to approach them we can jumpstart our own creativity.

Tomorrow is June 16. Though a seemingly humble day on its own, many an English major and literary buff recognizes it as Bloomsday. Bloomsday marks the anniversary of the fictitious events of James Joyce’s Ulysses, a work famous for its allusive and elusive nature.

Opinions about Ulysses span a near-infinite range. After its release in 1922, authorities in the US considered it so NSFW that they banned it until the courts declared it safe for publication in the early 1930s. The novel’s notorious density, self-referentiality, and seemingly fractal structure have kept readers and critics busy for nearly a century now.

But why all this effort? Why the multiple readings starting with “Stately plump Buck Mulligan” then following the likes of Stephen Dedalus, Leopold Bloom, and other denizens of Dublin? Do great treasures lie at the heart of this castle covered in thorns, like in fairy tales of old?

Luckily, Mortimer J. Adler and Charles van Doren investigate many of the various levels and types of reading in their How to Read a Book. Whether you are reading for word choice or grammatical trickery, or plot, or story, or theme, all books have something to offer, even ones as feared as Ulysses. 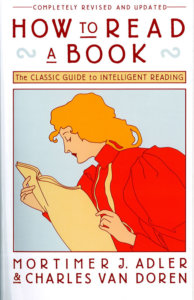 How to Read a Book

How to Read a Book

“Ineluctable modality of the visible: at least that if no more, thought through my eyes” is a sentence in Ulysses that has caused people to stop reading the book. But even if we don’t know what Stephen Dedalus is thinking about, we can admire the wash of sounds and rhythms that Joyce employs here.

Or, consider one of the later chapters/episodes of Ulysses that takes place at a maternity hospital. The sentences also have the same lyrical quality as Stephen’s earlier thought. But this time they also parody different English-language authors to show the evolution of literary styles. Given the setting, this evolution is also meant to suggest the development of a baby from embryo to newborn. As we dive deeper and deeper, part of the pleasure of grappling with challenging works is to see how they subvert our expectations.

The elementary and inspectional methods Adler and van Doren describe help the reader to acquaint themselves with a writer’s voice, style, and concerns, but a work like Ulysses constantly turns what we think we know on its head, especially the deeper we go into the novel. In one moment we think a character is in a field, but it’s only a memory. The “objective” narrative voice becomes colored by nearby characters or outright lies to the reader. It can feel like boxing, having to bob and weave and anticipate these kinds of literary hooks, jabs, and fake-outs. But, How to Read a Book does help give us some fancy footwork for such intellectual skirmishes.

“In developing these skills, we gain the ability to draw more material for our own creative processes from the works we encounter.”

These strategies shouldn’t be limited to literature only. Questions of how to “read” works of art are relevant across all the creative fields. We often speak of “reading” a painting or a musical score or a photograph (photography is derived from the ancient Greek which means “writing with light”). Like the old saying goes, to be a good writer, one should be a good reader. But let’s not be so quick that we throw out photographer, architect, painter, sculptor, composer, or any of the many others I’m missing here.

And as we develop reading strategies in our fields of interest, we become better able to uncover the tricks creators employ. More often than not, what makes a work “difficult” is its tendency to undermine typical conventions. Such moments frustrate us, delight us, and make us wonder what will surprise us next. With that knowledge, we can apply these same tactics to our own works in response to our own times.

Nowadays, there are apps and whole libraries’ worth of secondary literature devoted to helping readers sort through the tools of Joyce’s trade. Defenders and detractors continue to pile on one another and will likely do so for at least a few more centuries. It’s what Joyce himself wanted.

But pieces that are rated high on those “must read before you die” lists you find don’t have to be your only source of inspiration. I delight in binging on pulpy detective stories from the 30s and 40s on occasion. Sometimes the “challenge” is what we as readers bring to a work. No matter the piece that you approach next, there is sure to be fuel for your creative sparks when you start digging into it.