As recreational marijuana gains greater acceptance across North America, a seasoned cannapreneur wants to create the Mickey D’s of weed.

You pull up to the take-out place around the corner, browse your options for a moment, then ask for the daily special plus a side of greens and a cookie for dessert. You fork over some cash, and a seconds later, the friendly cashier hands you your order. “Enjoy your cannabis!” she says with a smile.

Welcome to 2018, when a whole new kind of “happy meal” is on the menu in North America.

More than 60% of Americans now support nationwide legalization of marijuana, and 29 states (plus Washington, D.C.) have already passed laws that permit cannabis consumption in one form or another. Later this year, Canada will follow in Uruguay’s footsteps to become only the second country to fully legalize weed within its borders, and even the Mexican government is weighing the pros and cons of green-lighting ganja. This all stands in stark contrast to the D.A.R.E. curricula and “Just Say No” campaigns we were inundated with as children.

Many Americans struggle to reconcile the normalization of marijuana with the fact that the federal government still classifies the plant as a Schedule I drug. Others, however, see only green pastures and the opportunity to rake in some of the estimated $12 billion the cannabis industry is expected to generate in North America this year. Many wide-eyed cannapreneurs, though, lack the know-how when it comes to operating a prosperous dispensary.

That’s why Christian Hageseth, the founder of Colorado’s Green Man Cannabis, authored Big Weed: An Entrepreneur’s High-Stakes Adventures in the Budding Legal Marijuana Business in 2015. And that’s also why, three years later, he’s laying the groundwork for a whole new way for consumers to score cheeba: through franchised dispensaries. 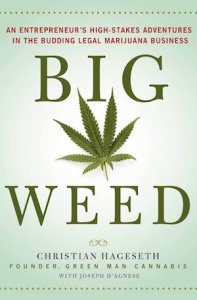 The U.S. economy already includes more than 780,000 franchises pumping out $890 billion each year. With that in mind, Hageseth hopes to leverage the knowledge he’s gained from overseeing two grow operations and four award-winning dispensaries to help others navigate the wild west of legal weed and avoid the million-dollar mistakes he made while building his brand.

With the launch of ONE Cannabis, Hageseth seeks to create the world’s largest cannabis franchise by providing entrepreneurs with a proven business model, award-winning products, and easy access to support. He anticipates having 50 franchises up and running by the end of 2019.

If you’re interested in learning more about the present and future of the cannabis industry, here are a few of the key insights from Big Weed, Hageseth’s first-person account of striking it big in bud.

Despite its recent strides, marijuana will continue to face opposition for many years to come.

Most police officers, politicians, and judges have spent their entire lives believing that marijuana is an evil substance that deserves to be outlawed. And although more and more people are adopting new attitudes after experiencing the benefits of marijuana for themselves, it will still be quite some time before certain groups relinquish their prejudices and discriminatory belief

The marijuana economy will evolve rapidly, but will remain cash-based until federal law evolves.

Although several states now legally permit the sale of marijuana, the cannabis industry must strictly operate on a cash basis until the federal government adopts new policies. Federal statutes state that any money deposited in U.S. banks be backed by the government, and because cannabis doesn’t yet count as a legitimate commodity, cash is required in almost every aspect of maintaining a marijuana business.

The tobacco industry is currently prohibited from participating in the sale of legal marijuana, but this won’t always be the case. Sooner or later, cigarette manufacturers and other legacy brands will see the opportunity in selling cannabis, and they’ll turn their attention toward legal weed. When that happens, picking up a pack of joints could become as quaint as buying a box of smokes is today.

The effort to legalize cannabis is continuing to evolve in the United States, and as marijuana further works its way into the mainstream, economic opportunities in the industry will continue to flourish. To discover more of Hageseth’s insights into the cannabis industry and forecasts for the future, check out the blinks to Big Weed today, or explore any of the thousands of other nonfiction titles in our constantly growing library.