Way Before It Was Cool: Was Henry David Thoreau the First Hipster?

Despite having written Walden in the 1850s, you could well be sitting next to another Thoreau sipping his cappuccino in a cafe today.

Taking a digital stroll through Pinterest or changing the channel to HGTV these days, you can’t avoid the trappings of shiplap or people lapping up a DIY homespun meal that they prepped with the peas or beans they grew in their garden. The concept of tiny house hunting has its own TV show, and in the dawning of the #deletefacebook age we seem to have entered, it is perhaps no surprise that we seek out the comforts of what are considered simpler times. It’s to the point that it’s parodied on Portlandia!

But! 40 years before the dream of the 1890s was a figment in some pork-pie-topped imagination, there was another intrepid spirit who similarly sought to simplify his life: the American author, Henry David Thoreau. And, after spending time living in the woods outside his native Concord, Massachusetts, Thoreau condensed two years’ worth of naturalistic, philosophical, and societal observations into his renowned work, Walden. 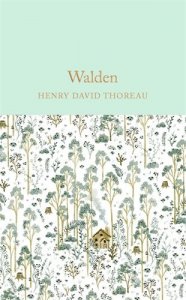 Though often cited as a paragon of progressive virtues, Thoreau can come off as strikingly conservative. He often cites the supposed “progress” of society as his reasoning for moving out into the woods. Today’s hipster talks about wanting to move into the woods because of Facebook and Amazon and how these companies and others like them have bled communities of their individual character; Thoreau felt the same about the then-fairly-new railroads. The accelerating speed of everyday life began to prove to be a bit too much for Henry.

Even the distressed and minimal aesthetic that you find in third-wave coffee shops, boutiques, and brunch spots would have appealed to Thoreau. He may have assembled his cabin on his own, but he bought it second-hand and disassembled it first! It’s not a far stretch to imagine Thoreau in some gentlemanly lumbersexual ad campaign nowadays. And he kept his furnishings simple, mainly a bed, a desk, and three chairs so he could host guests.

Some of the guests Thoreau hosted were his intellectual friends from Concord (Walden pond was only a little over a mile—around 3 kilometers—away), whom he would also visit from time to time. They would have chats about the ideas they were thinking about and like many modern people who go off to the woods for retreats, Thoreau was deepening and developing his interest in the philosophies and world-views espoused in Buddhist and Hindu texts, such as the Bhagavad Gita. There are moments when these influences become evident in his writing. What writing it is, too! Those years he spent honing his words after living by the pond paid off. It’s no wonder that Thoreau influenced generations of writers since, including the original hipsters, the Beatniks.

And in that writing, Thoreau’s stress on authenticity also has its own modern echoes. “I went to the woods because I wished to live deliberately, to front only the essential facts of life, and see if I could not learn what it had to teach, and not, when I came to die, discover that I had not lived,” he writes in what is probably one of the most famous passages from the book. #YOLO for the 19th century, perhaps?