Fail, Fail Again, Fail Better: Why There’s Only Ever Been One Real Route to Success

'The Up Side of Down' has nothing to do with 'Stranger Things', but it could still change your life!

None of us likes to fail. In fact, most of us avoid it at all costs. Some individuals even go so far as not to try to achieve their goals for fear of failing at them. For these people, their fear of failing is greater than the potential rewards that success would bring.

However, numerous studies have now found that failure itself is crucial to our success, both personally and professionally. How does failing help us to succeed? Well, it all comes down to how we view it. 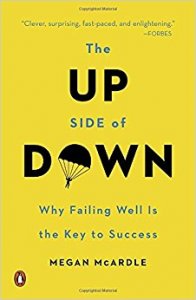 The Up Side of Down

The Up Side of Down

In today’s article we’ll be taking a look at The Up Side of Down: Why Failing Well Is the Key to Success by Megan McArdle. McArdle believes that many make the mistake of believing success is the result of innate intelligence or giftedness, so when we fail at something we assume it is a lack of these attributes.

By viewing failure in this way, we are removing our own responsibility—it is out of our control and therefore insurmountable. However, in reality, success comes from hard work and commitment, not luck or innate qualities. When failure is viewed as a result of our own actions and personal development, it is more easily seen as surmountable and within our control. In this light, failing is not the end of an endeavor, just a signal to try a new approach. It is something to learn from, not, as many perceive it, a catastrophe.

Taking our cue from The Up Side of Down: Why Failing Well Is the Key to Success, we’re going to offer you five ways you can re-frame how you view failure, so when it comes to reaching your dreams you know you just have to keep on failing until you get there!

To fail is normal

The first thing to acknowledge when starting any new endeavor is that failing is completely normal. What wouldn’t be normal is succeeding the first time you attempt something! You are learning a new skill, trying a new path, taking a risk. If you were guaranteed a positive result at the first attempt, where would be the challenge in that? That wonderful feeling of success will be all the sweeter when you reach your goal, because you know what it took to get there. And, yes, that includes a few failed tries. Accept that failure is normal, and soon you’ll see it as just another step in the journey of getting to where you want to be.

Trying and failing is better than guesswork

It’s tempting to try to predict the success of a project you’re about to begin working on before investing the time or effort in actually getting started. Although there is definitely some merit to this, don’t forget that predictions can often fall flat. Rather than spending a lot of time calculating whether or not your project will be a success or a dud, why not make low-fidelity iterations (if possible)? If they fail, you’ve learned from them, and not wasted anything from trying! You’ll probably be surprised by how much more you’ll learn using this method than spending lots of time trying to predict the future.

Failure is an inevitable part of life

We live in a world that is advancing all the time, with technology and people-power protecting us wherever we go. However, it’s easy to be lulled into a false sense of security. Despite the most sophisticated technologies and thorough processes, we have to accept that failure can and will still happen. It’s important to understand that this will always be a part of life, irrespective of advances, so that we are not ill-prepared when it does. Many have learned the hard way that, sadly, nothing is completely foolproof.

Acknowledging failure is the best route to success

Sometimes it’s hard to admit we’ve failed, even to ourselves. Easier to cover it up, not mention it, or pretend it never happened at all. But if we refuse to acknowledge failure we are denying ourselves the opportunity to learn from or improve on it. Burying our heads in the sand only ensures we continue to fail and fail harder. Try owning up to something you’ve failed at and you’re already taking one step in the direction of a future success. Your admission allows you to see clearly what went wrong and how you could do it differently next time. Give it a go!

Be prepared for failure when it comes

As we’ve already discussed, failure is an inevitable part of life. This means, in order to mitigate the damage both to ourselves and others when it arrives, we should be prepared for it in advance. That doesn’t mean being endlessly cynical, but it does mean being practical. For example, keep a savings account when you have a regular income so that if you lose your job you have a safety net. Simple measures like these also mean that you are more able to take risks and aim for the stars, because, if you fail, you’ve prepared yourself for the consequences.

Failure can be a tough pill for anyone to swallow, but, as we’ve seen in McArdle’s The Up Side of Down, when viewed in the right light, it can also be a stepping stone to your next success. The next time you fail, take a deep breath and, rather than pretend it never happened, simply acknowledge it. Remind yourself that everybody fails at times and that is how we learn and grow. Look back on what went wrong and decide on your next approach. Whatever you do, do not give up! Remember, it’s this failure (and the next one!) that will ensure your ultimate success.