Electrifried Mind: How Does Technology Affect Our Morality?

Why you should read Kurt Andersen’s ‘Fantasyland’. And a fifty year-old book right after.

We’ve swung into another holiday season! Time for warming ourselves beside the fire, baking cookies, family get-togethers, and the many simple pleasures that come with spending time inside amid the long evenings.

This also means that we’ll probably spend time in traffic or at the airport or jostling with crowds at the mall, wondering at the insanity that can also dull the bright moods of our recreation. Well, we may be onto something. 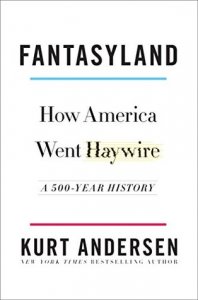 Kurt Andersen’s new book, Fantasyland, and the corresponding article he wrote for The Atlantic, look at how philosophical developments in American history have steadily driven the American populace a little crazier year by year. Those 500 years of Euro-American culture add up after a while, diffusing among various social and political movements. The worldview of Berkeley liberals from the 1960s heavily influenced what is considered today’s conservative media, for example.

Regardless of political affiliation, many of those we encounter seem to float around in their own bubble with little regard for the other people around them. More often than not we pinpoint the newest technologies as the cause of all this. People spend so much time staring at smartphones, they don’t have time to notice the world around them.

A lot of commentary we hear blames the content for this moral degradation. It’s the violence or cynicism or apathy in computer games or movies or television. Failing those, it’s the tendency of algorithms to push people towards more radical views, or how the very presence of bad behavior in the news encourages its perpetuation.

That was the idea posited back in 1964 by Marshall McLuhan, a professor at the University of Toronto, in his groundbreaking work Understanding Media: The Extensions of Man. Perhaps it is fitting that only a few years after his book debuted, the first message was sent out over the ARPANET, the forerunner of today’s Internet. However, McLuhan’s ideas about electronic media remain valid all these years later.

McLuhan argued that pre-electronic media, in their slowness of production and distribution, lent themselves to a centralization of human thought and effort. Cities, monarchies, overarching philosophies developed as a result of these slower, more controllable relationships. With electronic media like light bulbs, radio, and television, this centrality was shattered. People had access to more information at greater speed than ever before.

The Internet acts in the same way to an extent even McLuhan likely could not have predicted. Notions slip around traditional gatekeepers faster than ever before. While this more democratized relationship between ideas has provided fertile ground for their evolution, it has also crept into our morality.

Our flattening hierarchies lend themselves to a state in which every moral posit and every claim to truth hold equal weight. Perhaps it is of little surprise, then, that we hear of so many instances of vigilante justice, cyberbullying, and non-state actors’ actions. Even the success of the film Split seems somehow indicative of our current technological age’s effects on society.

Where future developments in technology will lead is anybody’s guess. Will the ever-greater distribution of systems — maybe leading to a day when your monitor is in front of you, your disk memory is in Utah, your RAM in central Washington state, and your graphics card in Lisbon — produce a similar, further shattering of our moral compass?

Or, will advances in the usage of quantum computing, with its non-binary computational framework, herald a moral revolution more apt to embrace the paradoxes this current electronic age seems so unwilling to confront? Already, the increasing influence that companies such as Facebook, Amazon, Google, Apple, and Microsoft exert over the technological realm show that much of the freedom associated with the Internet in its early public usage has become something of an illusion. Perhaps the greater transparency around this centralization will create a similarly more cohesive moral environment.

How we choose to grapple with these questions and the new technologies that become available will provide some answers, yet also raise new questions in their wake.