Why Being Defiant, Dangerous and Different Will Make You a Rare Breed in the 2020s

Authors of Rare Breed, Sunny Bonnell and Ashleigh Hansberger, share how what you perceive as your most troublesome traits may actually end up being your superpowers!

All we had to do was change a little, we were told, and we would be in the club. Fifteen years ago, in a small coastal town, we dipped our toes into the business world to start a branding agency called Motto. We were in our twenties, had $250 in the bank, and had never run a company. Everyone told us we’d fail.

From the beginning, we were swimming against a rip current of doubt. People said we were too young, too female, too inexperienced and too broke to succeed in a world where admen in their sixties made the rules. We’d seen the vanilla work local ad shops had been putting out for their clients and thought we could offer an alternative: branding with purpose, built on the war cry of the bold leader.

The more we saw how the area’s old-school marketing agencies operated, the more supercharged we became. The creative work was as bland and forgettable as canned soup.

Motto would be different, we decided.

As two young women with weird and wild ideas, we were already different. Working out of a warehouse in a shady part of town, we leveled with our clients about their mediocre campaigns and pitched risky, provocative ones. We wanted anyone who worked with us to not just look over the ledge but actually take a giant leap.

Quickly, we became a rejection of the established order. The ad bros knew their business model of charging clients three-star fees for bland campaigns and reaming them with hair-raising ad buy markups was past its expiration date. Online was coming, mobile was coming, and we were there to clean out the fridge.

Still, growing our agency was an uphill climb. Our friends, colleagues, and even our parents begged us to sand down our prickly edges and stop ruffling feathers. Quit talking about “fluffy” ideas like purpose, vision and leadership. Play nice. Even our competitors advised us that if we were just more conventional and less audacious, maybe we could do well.

That’s always the prescription, isn’t it? Change this one thing—compromise a little bit on your dreams, your values, your goddamned identity—and you’re explicable. Palatable. Except that the second the paint is dry on your new face, the same people lean over and whisper, “Actually there’s this one other thing…but then, you’d be perfect for this opportunity.”

We heard it. You’ve heard it. Success is conditional. You can’t have it if you show up as your quarrelsome, obsessive, tattooed, queer, “not good enough” self. You have to change. Speak slower. Wear heels. Leash your temper. Put a lid on your political views. Go out for happy hour with the team. Be agreeable.

And then, you’re unrecognizable.

So, we declined the traditional path. Maybe it was brave. Maybe it was stupid. But to us, success on someone else’s terms was surrender, not victory. We’ve earned clients like Google, Hershey’s, and Twentieth Century Fox. We have a Manhattan address. And seventeen years later, we’re still the same audacious outliers we were back in the Lowcountry.

That experience led us to the concept of our book Rare Breed: A Guide to Success for the Defiant, Dangerous, and Different. 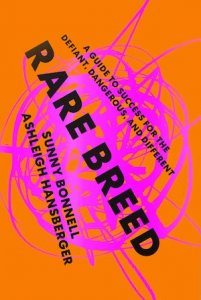 by Sunny Bonnell and Ashleigh Hansberger

In working with one demanding, brilliant leader after another, we uncovered a truth about success. If you look at the creative minds and innovators who’ve changed the game, they’re not well-mannered, by-the-book types. They’re unruly evangelists. Arrogant hotheads. Combative perfectionists. These people didn’t succeed despite their abrasive, antisocial qualities but because of them. We called them the Rare Breed.

In any workplace, the qualities that define a Rare Breed—guts, candor, a rebellious streak, stubbornness, a provocative style—are unacceptable. For years, we saw a lot of people like us—people who overthrow the conventional—struggle with the same question we faced: “Do I change who I am to make my climb a little easier?” Many gave in out of exhaustion. But we noticed that while those folks encountered less resistance, they also never achieved their dreams.

The ones who did, leaned into the same traits that parents, teachers, and bosses had insisted would kill their chances for happiness: obsessive zeal, rebellious fire, hot-blooded temper, audacious fearlessness, being weird, and so on. Not only did they refuse to change who they were, they turned those troublesome qualities into superpowers. Unapologetically, obstinately, they built brands and products and businesses and movements around being authentic, mercurial, and inspiring.

In doing so, they inverted the old rules. No more dialing yourself down to make a mediocre world feel comfortable. Now, it’s about staying who you are and making the world come to you.

That’s the message of the Rare Breed. People—some well-meaning, some manipulative—will claim that you’ve got to soften who you are and move to the center in order to get the job, get the promotion, and get the opportunity. The more defiant and unconventional you are, the louder they’ll say it. Think about the personalities that have shaped today’s world, from Kendrick Lamar to Steve Jobs to Alexandria Ocasio-Cortez. Predictable, middle of the road, and off the rack, right? Hell no. They’re the ones marching in the streets with Black Lives Matter, the ones speaking dangerous words and sharing impossible ideas. Originality, creativity, and guts mark the path to greatness.

Those folks barking at you to be less, be different, be something other than who you are today? They’re not doing it because that’s your path to greatness. They’re doing it because compromising makes them feel less damned by their own mediocrity. You at your best, living your absolute truth with a first-day-of-summer grin and your flaws exposed for everyone to see, is a rebuke to their cowardice.

Know What Kind of Rare Breed You Are

The mainstream sees these qualities as troublesome—as vices—but they’re really virtues. They’re your superpowers for creating standout success. But if you want to use them to your advantage, you need to know where you fit in that taxonomy. Are you a Hot-Blooded rabble rouser who shoots first and apologizes later? A Hypnotic charmer with the power to influence even the most cynical person? Are you Emotional, driven by deep, personal convictions? The better you know your secret strengths, the more you can build on them to get what you want.

Take the Rare Breed Quiz at www.rarebreedquiz.com. You’ll find out where your power lies and learn about famous people who share the same Virtue.

The message of the Rare Breed: Be that rebuke. Be a living reminder to everyone still wondering if they should compromise that they don’t have to. Tell them their (and your) sensitivity, imagination, defiance, and hubris are not vices. They’re virtues. Celebrate them and don’t for one second back down from them. It’s not the easiest path, for sure. You’ll get panicked calls from Mom and Dad and lose a few jobs. We’ve been there.

But now we’re here — right where we want to be. Because we didn’t change. That’s success, and we wish it for you. Peace. 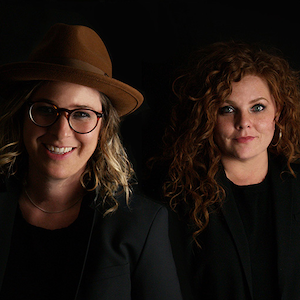 ABOUT THE WRITER
Sunny Bonnell and Ashleigh Hansberger

Sunny Bonnell and Ashleigh Hansberger are the co-founders of the award-winning branding agency Motto, and the co-authors of Rare Breed: A Guide to Success for the Daring, Dangerous and Different (HarperOne, 2019). Learn more about them and their book at rarebreedbook.com.