Low-Fat Pigs, Designer Babies, and the End of All Disease: How CRISPR is Redefining the Future

Advances in genetic engineering have made it possible to transform humanity forever. Does that mean we should?

Have you ever wished you were taller, leaner, or maybe had a different eye color? Or have you ever wondered what life would be like if you possessed a genius IQ or an olympian’s physique? While it can be fun to fantasize about changing qualities about ourselves, the technology now exists to alter the traits we pass onto our children. Thanks to the astonishing strides made by genetic engineers in recent years, in the near future, it could be common practice for parents to enhance their offspring in utero.

It’s crazy to think that this type of technology exists, but geneticists have recently pioneered a process to easily edit genomes in plants, animals, and, yes, humans too. It’s all centered around segments of bacterial DNA called clustered regularly interspaced short palindromic repeats (CRISPR) and their ability to make altering genomes as easy as editing a document.

Think of CRISPR as a book with photos of anyone who’s ever wronged you. Bacterial cells in our bodies contain similar catalogs right in their DNA to keep track of various viruses they’ve been assaulted by. Say a bacterium that has survived its fair share of battles finds itself under attack from a previous offender. The bacterium quickly scans through its CRISPR catalog to identify the virus and manufacture a defense (usually a protein called Cas9) that it uses to edit out the portion of its own DNA the virus is attacking. This nullifies the virus, and the bacterium lives to fight another day. But what does any of this have to do with changing traits we pass on?

Well, in 2012, American biochemist Dr. Jennifer Doudna and a team of researchers discovered that the CRISPR system could be reprogrammed and used to edit DNA in any type of organism. Not only that, but CRISPR introduced a faster, cheaper, and far more precise way to edit DNA compared to any other method available. Fast forward to today, and CRISPR is on the cusp of changing the course of civilization.

The ability to rewrite genetic code opens up innumerable new possibilities for our species. For starters, gene editing could endow us with an endless food supply by using CRISPR to increase agricultural yields and develop drought-resistant crops. The same technique could also be used to reduce fatty acids in livestock such as pigs. And that’s just the beginning. CRISPR also holds the potential to eradicate thousands of genetic diseases, saving millions—if not billions—of lives. But as Dr. Douda quickly realized, such technology could also spell catastrophe for civilization. 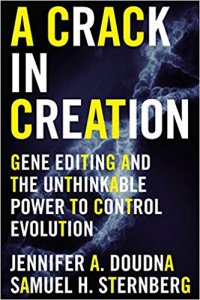 A Crack in Creation

A Crack in Creation

In A Crack in Creation: Gene Editing and the Unthinkable Power to Control Evolution, Dr. Doudna herself outlines how the revolutionary method she discovered can allow our species to obviate evolution and forge a new path forward. Yet she also offers insight into her revelation regarding the risks of such a powerful tool. Doudna explains how CRISPR could serve as humanity’s salvation, but, in the wrong hands, genomic rejiggering may lead humankind down dark paths. And it’s not just the threat of designer babies or super soldiers that are stoking folks’ fears. CRISPR could theoretically be applied to germline engineering, forever changing the genes of future generations.

So, just how close are we to witnessing the first effects of CRISPR? Closer than many people might think. Just this past January, it came to light that Chinese doctors have been using CRISPR to treat cancer and HIV patients since 2015, marking a first for humans. And while U.S. doctors have already applied the process to successfully edit DNA in experimental embryos, physicians are only now about to begin the country’s initial trials on patients afflicted with cancer. Such treatments could lead to cures for dozens of diseases within a matter of decades, but the same technology might also be used for far more sinister purposes.

In a world where it’s possible to tweak traits in ourselves and our offspring, where should we draw the line? Using CRISPR to eliminate diseases and birth defects seems like a no-brainer, but what about when it comes to individual appearance, intelligence, and athleticism? Is it wrong to modify our genetic makeup to ensure future humans are healthier, stronger, and smarter than we are today? Or are we obligated to do everything we can to ensure the survival of our species at all costs?

There’s a fine line between improving human health to allow for longer lives and embracing genetic enhancements to lead more enjoyable existences. And although the U.S. National Institute of Health has currently suspended research into the editing of human embryos, many other countries lack such regulations, and a rising number of proponents are arguing in favor of pursuing these advancements.

Many challenging questions now surround the social, ethical, and philosophical implications of gene editing, and Dr. Doudna is on the forefront of these discussions regarding her discovery. She’s continuing to urge her colleagues to refrain from researching germline and embryonic engineering until a comprehensive discussion can occur. Doudna also thinks that safety, ethics, and regulations should direct future applications of CRISPR, yet she believes that even legitimate objections to genetic editing shouldn’t result in an absolute prohibition of such research. Regardless, it’s up to us to carefully consider the outcomes of this incredible new ability and do our best to ensure this technology isn’t abused.

Learn more about CRISPR and the intricacies of genetic engineering in the blinks to A Crack in Creation, or explore the scores of other scientific titles in Blinkist’s library today.