Bait the Hook: The Secret to Working through Creative Blocks

What does fly-fishing have to do with keeping you at peak creativity?

Waiting for inspiration is a time-honored tradition in the creative field. Even when we go back to the beginnings of written culture, dear old Homer started out with an invocation to the Muse. In effect, he was hoping that some messenger from the gods would fill his head with the right words to tell his stories of hard-fought battles and monster-fraught travels.

It’s a common image, up into the present day. In his work, Hey Whipple, Squeeze This, Luke Sullivan describes how the workflow in an ad agency frequently involves busying oneself with conversations about sports or movies and killing time with tasks related to everything except the actual work for the client. It’s like a scene from a pulp detective novel.

And then what? Sure, maybe you’ve gone for a jaunt and found out that procrastinate comes from the Latin meaning “belonging to tomorrow.” A few more diversions pop up along the way. And then? Generally a sense of frustration at not having accomplished much. Then that leads somewhere close to, if not directly into, self-pity. And that is not a fun hedge of brambles to find oneself in. So how does one avoid this particular hazard, even if we’re not feeling inspired? 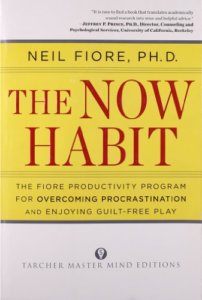 Neil Fiore offers a view into the underlying psychological motivations of procrastination in his book, The Now Habit. He looks at the fears and disappointments that ensnare us along the way. These traps hamper our progress or cause us to give up altogether, often early in our endeavors — our personal sloughs of despond, as it were. He also provides suggestions on how one can overcome these particular impediments. While the “How” of Now is important and worth your while to investigate, I am more interested here in the “Why” and its importance to our creativity.

I recently concocted a fishing analogy for this. Essentially, the effort you put into your project is the bait you stick onto the hook before you cast it into the water. Inspiration is the fish you’re trying to catch. Writing along here, I realize that fly-fishing is probably the best form of fishing for this analogy to work, and therein lies my point.

Because, once your thoughts are in front of you in a more tangible and accessible form, you start making more associations in a kind of nuclear fission reaction of creativity. Ideas strike each other and set off new ideas. Or, you see what influences are at work, and you can then choose to play them up or tone them down or try to break from them entirely. This starts a whole new chain of reactions that create iterations you are then free to follow further or fold back into what you have done before or forget about entirely.

You start to recognize where there might be issues with a concept, too. In the case above, I saw that just to use “fishing” would be an insufficient comparison. After all, a lot of fishing is stereotypically seen as sitting around waiting for the fish to bite, which is not my point at all. Instead, by restating it as fly-fishing, the need to work through the creative problem comes into greater focus.

One of my professors last year advocated this approach to problem-solving when he assigned us to design a personal logo. As part of the assignment, we had to produce multiple solutions before presenting several we found the most satisfying. I had filled up my artboard in Illustrator and then some. Some alterations between one version and another were miniscule, a little squashing here, a little stretching there. Others had been contorted to the breaking point. There were times when a new idea would spring out that seemed entirely unrelated to anything in front of me. More often than not, those ones ended up becoming my favorites.

And the same holds true for the creative works we hold up as paragons of their craft. Whether they’re novels or poems or costumes or songs or what have you. It is just that crafting and iteration that allows them to shine so brightly in our imaginations. In Whipple, Sullivan also tells the story of how he and his coworker presented twelve concepts to a client, all of which were rejected. They ended up receiving the commission in the end, because they presented a thirteenth.

That the final results turn out so differently from our initial concepts is also one of the delights gained from working through creative problems. The odd discoveries and sheer joy from exploring possibilities, researching solutions, and following intuitions to see where they lead make working through your creative blocks a habit worth forming.