Clinton and Kennedy’s 3 Secrets: How to Become More Charismatic

Some of history’s most influential people rose to power thanks to a lion’s share of personal charisma. Charisma can get you a better job, better health, and even help you earn more money. Here’s how you can get more.

If there were a spectrum for rating charisma, former US president Bill Clinton would score off the chart.

Conservative or liberal, woman or man, one thing that most anyone who met Clinton could agree on is that he had a talent for making people feel like they were the only ones in the room. The same was true for another US president: the legendary John F. Kennedy. Known as humble and kind, and prone to heroics, (he once led a navy shipmate to safety by clenching the strap of the other man’s life vest in his teeth and swimming like mad) Kennedy’s warmth won him both votes and hearts. But charisma is far more than a campaign trail tactic for the aspiring politician.

A potent concoction of persuasion, confidence, and charm, charisma grants those who have it more money, better health, and even less stress. What’s more, studies have revealed that the workplace performance of charismatic people is rated very highly by their co-workers. One researcher even observed that followers of charismatic leaders were so strongly committed to their leaders’ mission as to go above and beyond their official duties and make significant sacrifices in their personal lives.

But what happens if you aren’t a “natural” like Clinton or JFK?

Though its effects may be magical, charisma is really nothing more than a set of behaviors that can be learned and mastered. Steve Jobs, awkward in his early presentations, honed his skills over the years to become the lionized speaker we remember today. Also worth noting before you disqualify yourself from the realm of the potentially charismatic: charismatic people aren’t charismatic all of the time!

Take the famously captivating Marilyn Monroe, who shifted at will between her “Marilyn” and “Norma Jean” personas. Once, Norma Jean managed a perfectly normal subway ride without passengers noticing her. The moment she reemerged into New York City sunlight, however, all eyes were on her. By simply changing her body language and striking a pose, it was Marilyn she was taking out for a stroll.

Now then. Charisma is useful, and it’s also something you can learn. But what is charisma, and what can you do to become more charismatic yourself?

Human survival has always depended on finding people who are both powerful and kind. In a dangerous situation, we need to determine who might a) want to help us, and b) have the power to do so.

Anyway, while both warmth and power can be useful by themselves, it’s the combination that makes a person charismatic, and 1868 Great Britain’s elections provide an excellent case in point.

The race was down to William Gladstone and Benjamin Disraeli. Both men projected power, intelligence, and knowledge. One woman who dined with each of them separately commented on how Gladstone had impressed her with his power, but seemed to lack warmth. Disraeli, however, projected his presence and warmth as well as his power, making his dining companion feel fascinating and special. The woman commented, “After dining with Mr. Gladstone, I thought he was the cleverest person in England. But after dining with Mr. Disraeli, I thought I was the cleverest person in England.” As you might expect, Disraeli won the election. 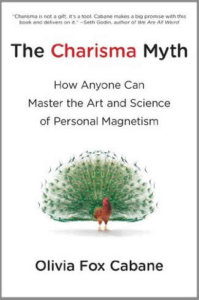 “Be warm and project power” is a tall (abstract pretty abstract) order, so we’ve called in some help. Writer, researcher, lecturer, and charisma expert Olivia Fox Cabane wrote The Charisma Myth to offer a few concrete ways that you can develop your charisma.

Famously charismatic people like Bill Clinton are experts in making others feel like they are the only person in the room. Manage to do the same and you’ll stand out from the crowd, since the average person is far from being present. And who can blame us, really? Our brains are wired to pay full attention to potentially important stimuli, such as new sights, sounds or smells. This inclination, which was key to our ancestors’ survival, means that we’re easily distracted.

Couple a natural inclination towards distraction with today’s never-ending digital interruptions, and voilà: a state of continuous partial attention in which we can’t attend fully to any one thing. One study found that almost half the average person’s time was spent mind-wandering – thinking about something other than what they were doing in that moment.

Cabane notes that being truly present by giving your conversational partner your full attention is one important step towards being charismatic. Listen when they speak, don’t be shy of making regular eye contact, and observe their body language. You can use mirroring to build affinity: watch how your conversation partner has oriented themselves, note their tone of voice, and behave in kind approximately ten seconds after to increase feelings of identification.

According to economist Jonathan Gilbraith, first impressions are important because our brains naturally seek to reaffirm early assessments, not revise them. As such, once you’ve made your favorable first impression on someone, it will cast the rest of the relationship in a rosier hue. It turns out there’s something to first impressions, too: one study found that after looking at a single photograph, subjects could accurately judge most personality traits of the person depicted (their extroversion or conscientiousness, for example).

Here’s what Cabane suggests for a first meeting: start out by complimenting your interlocutor or asking an open-ended question. You should also show that you are present and listening, building rapport, by nodding and responding to what they’re saying, ideally by asking more questions about them. When it’s time to end the meeting, your goal is to leave the other person with positive feelings.

You can only appear charismatic and likeable if you’re comfortable first. Being hungry, for example, will cloud your thinking, and low blood sugar can impair your attention and emotional control. Wearing something in which you’re likely to be too hot or cold is likely to make you squirm, too. And if that discomfort is visible in your body language, it can undermine your charisma.

Cabane’s advice to take note of your comfort also extends beyond the physical realm. When you need to turn on the charm, it’s important to quell your anxiety and stem that tide of apocalyptic thoughts. Here’s how The Charisma Myth counsels to handle both types of discomfort:

The physical: If you’re going on a very important job interview and have a choice between your favorite tried-and-true professional getup or something you’ve never worn before, go with what you know. New threads might look good, but an itchy tag at which you’re constantly swatting or a skirt that hikes itself higher than you’d like can undermine your charm.
The mental: When you’re feeling internal discomfort or negativity – both obstacles to charisma – Cabane coaches to remember you’re not alone in the experience and that what’s happening isn’t really serious. What you’re doing here is dedramatizing, and it involves interpreting a negative emotion in a way that reduces its impact. You can remind yourself that you’re simply a physical entity experiencing a rush of chemicals that combine to produce nervousness, or imagine that the negative emotion you’re feeling is being experienced by a community of supporters. Think about people who’ve already been through a similar experience, especially those you admire, and trust that they experienced the same thoughts and feelings as you.

A charming demeanor might not mean much if you don’t have the skills to back it up, but developing your charisma can get you hired, increase your chances of getting a raise, and even inspire your teammates to work harder for you. And remember – even if you weren’t born with Bill Clinton’s charisma, you can learn, and hopefully, the tips above helped!