“For most of history, anonymous was a woman.”
Virginia Woolf

Cathy Newman is an English journalist and one of the presenters of Channel 4 News. Her book, Bloody Brilliant Women delves into the colorful histories of lesser-known—but no less outstanding—women who’ve left a lasting impact on the world. Originally conceived as a way to mark the centenary of women getting the vote in the UK, 2018 would turn out to be a landmark year for women in more ways than one. 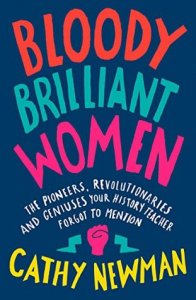 Following the release of the book, we caught up with Cathy to find out about some of her favorite “bloody brilliant women.”

Your book is so much fun to read. Why did you choose this playful tone?

I’m glad you like [it]. I had great fun writing it as the women I “met” — I feel I met them even though sadly most of them are no longer with us — were such vibrant, colorful characters. My history teaching at school was a bit patchy, to say the least, so I devour history books as an adult now. As a busy person, I don’t have a lot of time for dry-as-dust dreary tomes, so I wanted to make my own history book as accessible and entertaining as possible.

Out of all of those featured in Bloody Brilliant Women, which figure surprised you the most during your research and why?

It’s really hard to pick just one! But if you force me to name one woman and one alone it would have to be Beatrice Shilling. I had no idea a female aeronautical engineer played such a pivotal role in the Battle of Britain. The spitfires had developed a fatal flaw, and pilots were dying. Beatrice was the woman who fixed them! A motorbike fanatic, she got a taste for engineering as a girl, taking apart motorbike engines in her back garden. Once she qualified, she rode from one airfield to another on her bike, bag of tools at the ready, to ensure the spitfires could take to the skies again.

Your book mostly deals with recent history, but which women do you admire today and why?

Clever female politicians exist across the spectrum [of British politics], from Margot James and Eleanor Smith (Conservative) to Angela Rayner and Sarah Champion (Labour) to Nicola Sturgeon and Mhairi Black (SNP). They might not agree on their politics but they’re passionate about speaking as one on women’s rights. And their sheer resilience in the face of bucketloads of social media abuse is pretty impressive.

The early female police officers in my book paved the way for the first woman to head Scotland Yard [British police force], Cressida Dick — one of the toughest, most intelligent and determined police chiefs I’ve ever met.

I hugely respect anyone who campaigns to end violence against women—from Avon & Somerset Constabulary’s brilliant DCI Leanne Pook to the former foreign secretary William Hague’s aides Baroness Helic and Chloe Dalton. They pioneered a new approach to combating sexual violence in war zones and are now doing inspirational work with actor Angelina Jolie in this field.

Paris Lees and Munroe Bergdorf have moved the often fraught conversation around gender and identity into the mainstream with grace and charm.

Business woman Helena Morrissey and advertising supremo Karen Blackett are bossing it in the boardroom.

And Shard structural engineer Roma Agrawal and Crossrail tunneller Alex Mitchell are an inspiration to girls who want to know that no job is just for the boys in 2018.

How important is the current zeitgeist to the timing of this book’s release?

The original idea was to peg it to a hundred years since some women (though not all!) got the vote. But since I started writing, all hell has broken loose: Harvey Weinstein, #MeToo, the gender pay row and the controversy over President Trump’s pick for the Supreme Court. I don’t think I could have picked a more opportune moment to contemplate the battles women of the past fought—and the ones we’re still fighting now!

What one book do you re-read again and again?

Probably Jane Austen’s Emma. It’s technically perfect, elegantly witty, delicately plotted. And it has a message which has stood the test of time: choose your life partner for love not money.

What’s the best piece of advice you’ve ever received?

I refer you to my previous answer! But seriously, I think two pieces of advice have stood me in good stead. My dad always said: don’t let the best be the enemy of the good. As a perfectionist, sometimes I need to quit while I’m ahead, and enjoy the almost-but-not-quite-perfect moment! Then my co-presenter Jon Snow once advised me that the key challenge was to ask the filthiest possible question in the nicest possible way. It’s worked for him for many decades.