Internal successes should be celebrated by the whole organization. Today, we have compiled five amazing stories not only to shine light on these empowering victories but also to underline how one can achieve great outcomes even when there’s a challenge ahead.

1) Why proactive hiring is so essential

In late November of 2020 one of our team members in Visual Communications got an opportunity to take on a more senior role elsewhere. Being such a small team already, Kae, our Visual Communications Circle Lead, decided to take matters into her own hands. To submit deliverables on time and, more importantly, to not overwhelm her remaining team, she recognized that finding a replacement to fill the gap as soon as possible was the number one priority.

Kae proactively reached out to the Talent Acquisition team right away and prepared all necessary documents in advance, so that the position could be opened and published on the same day. Furthermore, she started sourcing leads from her own network as well to quickly gain considerable traction.

Since Kae already had a lot of experience as hiring manager in the past, she mentions that there are two things that tend to be overlooked which actually make a huge difference. Firstly, she stresses that when it comes to recruiting, every single day counts. It’s essential to check tools and messages in a timely manner since quick communication between the talent partner and the candidate has a substantial impact on the time-to-hire. Secondly, hiring should not be seen as an additional task that one can do in their spare time– Kae says, “It’s really something you need to pursue adamantly and proactively and it will take a lot of your week but it’s worth it!” Eventually, all the hard work did pay off, like it did for Kae’s team with the help of the Talent Acquisition team. “At the end we managed to close the position and have the contract signed in less than three weeks from the moment we learned about the team member leaving! I also have to say Blinkist has the best recruitment process I’ve seen so far, both from the manager and candidate side.”

2) Sourcing the best candidates through Tandem

To speed up the hiring process and to emulate an in-house recruiting agency at Blinkist, the Talent Acquisition team decided to try new approaches and tools. To enlarge the applicant pool of potential leads, we started actively sourcing potential candidates on LinkedIn.

As we realized that tackling this task individually was quite time-consuming, we tried out a new tool, called Tandem, to source together as a team. By using Tandem, it was easier to spontaneously check-in if any questions came up or also demonstrating different tasks while screen sharing was facilitated tremendously. While using timed intervals to find potential candidates it ended up being like a small competition among the team about who could find the most suitable people for each position. While fueling our competitive spirits, with Tandem we were usually able to source about 40 candidates in under two hours which is an amazing number compared to sourcing individually! Tandem made this experience extremely rewarding, fun and most importantly, it stressed how we are even stronger and effective when we work together as a team.

The content team aspired to launch an entirely new curation avenue in the Blinkist app called Topics which could be thought of as hundreds of different sub-categories. In order to bring this idea to life, they wanted to curate more than 500 content collections (playlists) that could be showcased on our topic pages. It was clear to Robyn, Blinkist’s Head of Curation, that she couldn’t curate 500+ collections by herself over the course of just two months– so she decided to get some help.

When presenting this case to Blinkist’s Executive Team, Robyn and her colleagues explained how they believed this initiative would add value to the app and increase customer satisfaction, as it would make content discovery much easier. During the case itself, Robyn highlighted that she would need to hire a bunch of freelancers to support her with the curation of the hundreds of collections.

Eventually, the Executive team was convinced which meant that Robyn had to hire talented and smart freelancers–very quickly! Not only that, another hurdle was that she had to hire a huge number of them as well. But against all odds and with extremely high skill as well as organization, Robyn was able to hire, over the course of only 2.5 weeks, 22 freelancers who worked with her for a little less than two months. She states, “It was an incredible but also very intense experience, as I looked at so many test tasks, had calls with all of the potential candidates, and eventually onboarded 22 people over the course of only a few days. I am so proud of what we achieved together!” Furthermore, Robyn mentions that with the help of the amazing freelancers, they were able to curate in total more than 600 (!) collections, and launched —with the help and hard work of the internal Discovery mission team—120+ topics in our app, only two months after they had pitched the idea to the Executive Team. On top of that: their predictions were right! Blinkist’s customers loved the new topic pages and a stark increase in engagement was measured since their official launch. “That’s what I call team success!”

4) What hiring managers should keep in mind

“Hiring data analysts has never been easy,” Melisa, Blinkist’s Head of Business Intelligence, says. This field is extremely on-demand which makes finding the senior talent that Blinkist needed for the Business Intelligence team even more difficult. It always required several months of hard work in the past. The challenge grew even bigger when not one, but two senior analysts needed to be hired within a two-months period.

The Business Intelligence team recognized this and used constant reflection to introduce changes which created a more efficient and leaner recruiting process, eventually reaching their goal. Melisa mentions that one of the biggest challenges with hiring was having to do so when her own team was already very stretched and she finally got approval to add one more headcount to the team. At first, Melisa figured that it was best to clearly define what kind of person they were looking for specifically. However, as she states, she realized that hiring is less about what one needs and actually more about what the market currently looks like. By being extremely detail-oriented and having a very demanding candidate scorecard, Melisa noticed that she was making the mistake of turning down promising candidates who demonstrated a great set of skills overall but lacked the Blinkist-specific processes and tools. Melisa mentions that her partner in the recruiting process, Johannes, Head of Talent Acquisition, was extremely helpful at calling out where she might have been originally mistaken as these specific hard skills could be picked up quickly and should not be a knock-out criteria. Once she realized this flexibility when it came to hiring, she could imagine how a promising candidate could later on grow into the expert her team needed when provided with the right onboarding. Eventually, all the hard work paid off: “We closed our hiring process in the intended time and have two wonderful new joiners. We are now 8 data analysts and scientists that form a great team!”

Melisa decided to give her team a learning session on her own journey as hiring manager over the past 3.5 years while building the BI team from scratch, and how she increased her own efficiency over this period of time. Melisa believes firmly that these approaches and techniques would be extremely beneficial as members of her own team became hiring managers themselves. Her hiring retrospective proved incredibly useful to not only her own team but also to other Blinkist members who were just starting their responsibilities as hiring managers as well.

At Blinkist we want to push and support internal mobility throughout the whole organization. Tracy, who is now a Publisher & Creator Relations Manager at Blinkist, had been in the position to change her role several times while at Blinkist and has had the opportunity to explore new paths as well as grow her skills at various points in her career. Coming from Books in Blinks Development & Innovation, Tracy mentions that what helped her the most is being quite vocal about her own aspirations– she has worked hard to understand what exactly brings her joy and to pinpoint what energizes her in a professional environment.

However, she also states that there lies some truth in the universal conception that opportunities may not always seem conventional. “Your dream role isn’t likely to just fall into your lap. But if you take the time to think about what your goals are and what you want to achieve – at Blinkist and also in life – you’ll likely be able to start spotting potential opportunities that may get you to where you want to go. If you’re proactive about collecting new experiences and skills and getting involved in new opportunities, you never know what else may come your way!”

Looking forward to learning and further developing her skill set, Tracy is also incredibly excited to be involved in helping Blinkist continue to be a trusted partner to publishers and creators. We, as a company, are always aiming to support personal and professional growth by enabling as well as facilitating internal mobility as much as possible. 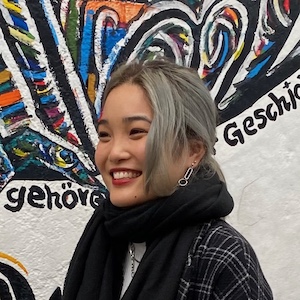 ABOUT THE WRITER
Tam Truong