Across the world, people are feeling the heat. As temperature records break across the northern hemisphere, many people are asking: is this our lives now?

While weather isn’t necessarily a reliable indicator of climate, this summer’s heatwave may be the kind of event that shifts more opinions towards the sense we’re experiencing real-time evidence of global warming.

Forecasts suggest that this week will likely contain the year’s hottest temperatures for many parts of Europe, closing in on 100˚F in Berlin (38˚C) and exceeding that in places like Madrid. And this doesn’t even account for the fact that parts of the West Coast in the US have been in a drought since last month, and wildfire smoke lingers over much of Canada’s western half.

It remains to be seen whether we’ll match the wildfire activity or surpass any of the temperature records we saw last year in the course of this summer. In 2018, Nawabshah in Pakistan registered a whopping 50˚C (122˚F) while Ouargla, a city in the Algerian Sahara, saw record temperatures of 51.3˚C (124.34˚F) which is likely not only the highest temperature ever recorded in the region, but in the whole of Africa. Wildfires in Sweden, Portugal, Greece, Italy, the U.S., and even inside the Arctic Circle claimed lives and destroyed homes and landscapes.

According to an article published by the BBC last year, scientists compared 2018 temperatures with historical data from seven different locations across the last 100 years and concluded that “climate change resulting from human activities made [2018’s] Europe-wide heatwave more than twice as likely to occur.”

While our planet’s climate has always been in constant fluctuation, this process used to be so gradual, and so subtle, that one century tended to look a lot like the next. Not anymore! Yet, many people still believe that global warming is a theory that is yet to be proven. 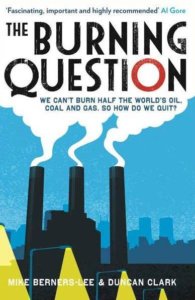 by Mike Berners-Lee and Duncan Clark

In The Burning Question, Mike Berners-Lee and Duncan Clark explain that, contrary to this belief, every single reputable scientific institution in the world agrees that our planet is getting warmer, and that greenhouse gases emitted by human activity are almost certainly the main cause. For over two centuries, we’ve known that additional greenhouse gases in the air, such as carbon dioxide and methane, will warm the planet, and we have still been releasing those gases into the atmosphere, where they’ve been continuously accumulating.

According to Henry Pollack, author of A World Without Ice, this should come as no surprise when we consider just how drastically humans have altered the land they live in. In his book, Pollack explains the role ice plays in Earth’s climate as well as how human activities became the main driver of climate change. Forests have been wiped out to be able to sustain our need for agricultural land and housing is built with the resulting timber. Logging and burning forests releases the CO2 that is contained within those living trees into the atmosphere. 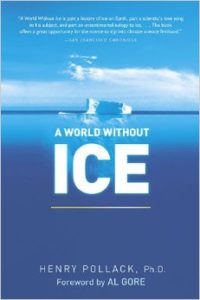 Even though this contributes to the infamously noxious effects of anthropogenic greenhouse gas emissions, deforestation is still common practice in many parts of the world. The massive growth of the human population to about 7 billion people is an even bigger issue, because it intensifies this very need for cleared forest lands.

Human industrial activity is, by far, the biggest driver of climate change today. Since the eighteenth century, the extraction and burning of coal, petroleum and natural gases has had a massive impact on global climate. CO2 concentration in the atmosphere has increased by 22% in the last 50 years, thanks to the burning of fossil fuels. And yet, we continue to rely on these activities to sustain human productivity, because of corporations that thrive when production is kept low-cost, regardless of its consequences.

You might wonder just how bad life on Earth can get if we continue our polluting, global-warming ways. Let’s start with glacial ice, then. There are some good reasons to take a closer look at ice and its place in the world, starting with the fact that, without it, we might run out of water for drinking, for flushing away sewage, and for agriculture.

For agricultural activities, meltwater arrives right on time for the spring planting and summer growing seasons. In the winter, rainfall freezes to create a source of water in the warmer seasons. But in a warmer world, mountaintops will have less and less snow, which means less meltwater when it’s needed most. This could lead to water shortages, which are already a real threat for many nations, as well as a potential cause for international conflict and war.

Naomi Klein’s This Changes Everything sums this problem up in a wonderfully succinct way — it’s capitalism vs. the climate. Government intervention is necessary to make the transition from fossil fuels to renewable energy sources. And to make our representatives act, we need a broad social movement that sparks action beyond just fighting climate change, and changes the ways in which we define and seek prosperity.

There is much more to the climate than we could get to in just this one article. Luckily, we have a few more that might intrigue you:

Are We Already Living Through the Sixth Mass Extinction?