Steven Pinker’s new release, Enlightenment Now, suggests embracing the values of an 18th century movement may be modern society’s only way back to progress.

In Mario Puzo’s novel, The Godfather, Don Corleone makes his displeasure in business dealings known by saying he can’t reason with somebody. Whoever that somebody is then does everything possible to make good with Corleone or develops a habit of watching over their shoulder.

Nowadays, it feels like being unable to reason with someone is more a badge of honor than a signal to start sizing for cement shoes. Victory is measured by the ossification of beliefs rather than the advancement of knowledge.

However, there are those who still hold the torch high for reason and the other values, which have come over the last two-and-a-half centuries to define the philosophical movement known as the Enlightenment. One such individual is Steven Pinker.

The release of Pinker’s new book, Enlightenment Now, makes the case for continuing and extending this tradition. However, this full-throated defense has also brought out detractors of the movement, such as Pinker’s intellectual foil Nassim Nicholas Taleb, who recently took to calling Pinker a charlatan (great word choice, as my coworker Erik pointed out). 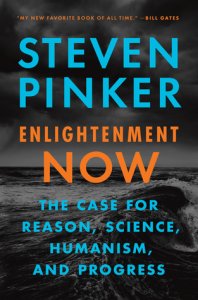 It is tempting to follow Taleb’s lead into deriding the optimism which Pinker displays in Enlightenment Now and many other works. The ubiquity of media has us awash in imagery and stories of famine and peril and tawdriness on a daily basis. What right does Pinker have telling us how wonderful everything is?

After all, the concept of order is foundational to our popular understanding of the Enlightenment. Looking at protests and droughts and technologies gone awry in the news tempts us to see evidence that the Enlightenment has failed, that our recourse is to double-down on the deconstructive thinking that took hold after World War II. And, in many cases, this is what many protesters claim they are doing: tearing down the establishment, doing away with the old order.

But are they? In the push for equality we see in movements such as #MeToo, #TimesUp, #BlackLivesMatter, and others, what we find is a call for greater human dignity. This elevation of the individual’s value was a key philosophical insight developed during the Enlightenment. Some counterarguments run that because the 18th century philosophers advocated racist ideas or had their ideas co-opted by racist regimes, then the whole shebang is null and void.

Besides, capitalism was a product of the Enlightenment, and look at all the people it’s left in the dust, its “Greed is good” mentality, and its lack of morality in general. Except that amorality is more of a feature than a bug. In developing capitalism, Adam Smith was more interested in determining the most efficient method of distributing goods and services. The underlying assumption in a capitalistic transaction is that the buyer will be better off than they were before. And, it’s not like Smith was a psychopath. He did develop a moral philosophy too about twenty years before The Wealth of Nations came along.

Like any other evolutionary process, however, the Enlightenment has trudged forward at what can seem like a sluggish pace filled with less-than-ideal compromises. Another frustration in this all-or-nothing era. When we look back at the distance covered in the last 250 years, we begin to realize we have advanced quite significantly and can take heart as we carry this torch further along.

Yes, but if everybody else was reasonable, they would see that I’m right and this would be so much easier, says our strawman. But, counters our second strawman, people are just not inherently rational. Study after study and book after book has come along to disprove this. Well, maybe neither presents the fullest picture.

Maybe it’s best to think of reason like a tool. What kind of tool is up to you. Is it like a hammer that you only bring out for specific tasks? Or is it like a smartphone that never leaves your side? Then the question becomes what do you use that tool for? The answers people provide and the choices they make create systems, and through the use of the Enlightenment toolkit, we have the power to improve them.