Thori Thordardottir speaks to Anatoli Makarevich, head of growth engineering at Blinkist about the ever-changing life of a Blinkist dev.

For this blog post, I talked to Anatoli, our Growth Engineering Team Lead at Blinkist. We were off to a great start when he pointed out that instead of me recording and typing up the interviews, I should use a “speech-to-text application”. I shouldn’t be surprised. After all, he is the guy dedicated to automation.

Anatoli is the person at the office with the biggest and brightest smile. He has an extra-special energy and I wanted to shed some light on why he’s so enthusiastic about his job.

Before Anatoli came to Blinkist he had his own company which is still quite successful in Russia. After a while, however, he decided to look abroad for something similar — a small but promising company that needed to grow. Though he loved Berlin, he had never been to Blinkist HQ when he decided to join the company almost 3 years ago. He had only chatted with the founders over the phone, and that was enough to convince him to move. He never regretted the decision and tells me that he’s just as excited about the company and his role today as he was when he first joined. It’s constantly evolving and now he leads a growing team of five people.

“As a growth engineer, I love to deal with people and how they interact. I face real people and I touch their lives in a way. Everything we ship has a metric which can be narrowed down to a number and if the data does not go up we dig into the data. That’s a super-amazing part of the growth team, that we see if people are engaged, if they read the blinks, if they interact and so on. Everything is measured in terms of how people like it and how it affects the business. That for me, are the most exciting things about it.”

Besides being so friendly and open, you and your team are probably one of the busiest when it comes to requests from others. How do you handle that?

“Even though we work hard, I don’t believe that people should work crazy hours. It’s about working smart. When we have so many requests, the main thing is to prioritize the right stuff, like our Magazine which affects millions of people. But I do feel bad about saying no several times so in the end I will always help people out. I worked overtime, for example, to put up the new career site for you.”

This is where I thanked Anatoli. He smiles.

“Nobody should be stressed. At least I hope that people on my team aren’t stressed, even though I sometimes might be.”

How does the future at Blinkist look for you?

“When I decided to join almost 3 years ago, I was so excited about certain things. Those things have not changed. I’m still super excited for the times ahead, I know that some people might think you stagnate in a job after a few years but that is not my experience here at all. The mindset of the company is still in the right place and everyone has found a good way of hiring professionals that have this mindset and are a great culture fit. It’s a healthy company, there are not many places like this I think”

What do you think people get at Blinkist that they might not get somewhere else?

“Definitely the diversity of the projects. We have the magazine, website, the podcast Simplify. There are big tech challenges and big business challenges which will only keep growing.”

Finally, if you would switch roles with one person at Blinkist for a day, who would it be?

“I would like to switch with Sarah Moriarty (Brand Marketing Lead). I love brand marketing — it’s so creative and I have tons of ideas!”

If you want to read more about what it’s like to work at Blinkist, check out our other interviews with Backend Engineer, Tomek, and iOS Working Student, Alex! 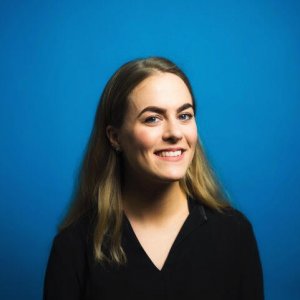 ABOUT THE WRITER
Thori Thordardottir

Before joining Blinkist as a recruiting and employer branding intern, Thori studied Psychology in her native country, Iceland, and Business Psychology in Edinburgh. She used to surf back home and snowboards whenever she gets the chance, dreaming of warmer places. The cat is her spirit animal and her real name is Þórunn Þórðardóttir.