An office. Judging by the constellations of Ikea furniture and earnest Macbooked youths, it is likely a startup. 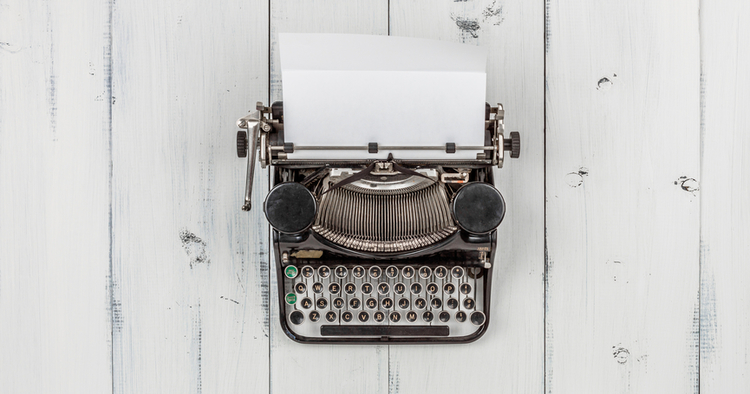 Social media wrangler, Linh, is munching granola. Her partner in content, Caitlin, is distracted by tinkling sounds issuing from the basement. They are made, she knows, by crates of beer being unloaded into the designated beer fridge.

She is staring at the numbered list before her and willing herself not to raid the kitchen for more peanuts. To be honest, most of what she thinks about is snacks. Today, though, she has more than snacks on her mind.

All right. All the internet’s a stage, but I’m no playwright. I’m here to abandon the third person, banish thoughts of snacks, and talk to you about a headline experiment we did at Blinkist — a little startup in Berlin that aims to help everybody read more and be smarter.

In researching for this article on the the effects of sensational headlines, I came upon Upworthy’s (actually really excellent) Slideshare, How to Make that One Thing Go Viral (just kidding). It’s well worth a look, if only for the net nerd humor. Flipping through, slide 23 on how Upworthy crafts and tests headlines grabbed my attention: 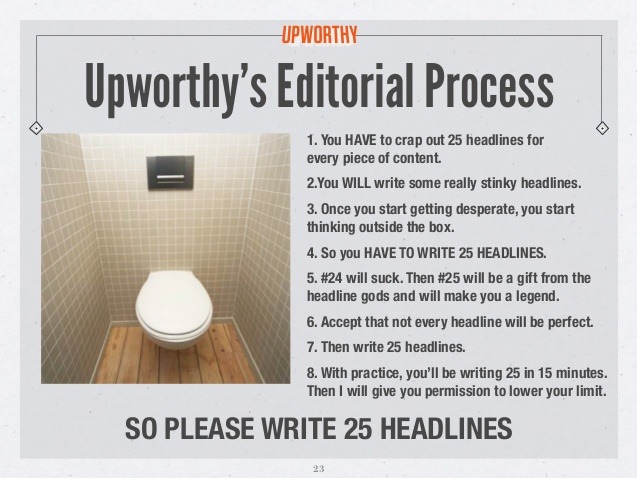 For the past few weeks, I’d been working at building up Blinkist’s content empire on Medium and other places around the web. I was already well aware that it’s headlines that make or break whether or not what you write ever gets read, making them perhaps the most important part of whatever you’re sharing.

Having not one, but two diplomas in literature, my past is riddled with essays. Without exception, composing a title was always the hardest part.

“So much depends on the titling of a body of text: it’s a promise to a reader, a harbinger of what’s to come, and ideally, it intrigues as much as it informs.”

Getting a title (or a headline) right is high-stakes, pressure filled, unpleasant business that deserves to be avoided.

Luckily, my past is also riddled with 5:00 a.m. crew practices on the chilly Connecticut river. This means that if something is arduous, painful, and unappealing to 9 out of 10 sane mortals but qualifies as “character building,” I’m in.

Of course I was in to try something interesting and terrible if it might mean more eyeballs on our content. And for giggles, I dragged in Linh, Blinkist’s social media manager, too.

We’d write those 25 headlines and test ‘em — in the name of science.

How we did it

As experiments go, this one is pretty low maintenance: no bunsen burners, no aprons, and no goggles required (unless that’s your usual work gear, of course). All you need is gdocs and a friend. After writing the article, I’d come up with an initial title and plop it in a file shared with Linh. Once we reached 25, we agreed, each of us would pick our top 3. Whichever candidates happened to coincide in our approval would immediately pass through to the testing phase. The rest, we’d armwrestle over in order to get to four.

Armed with Upworthy’s headline rules, 20 working fingers, and our intrepid spirits, we dove in. 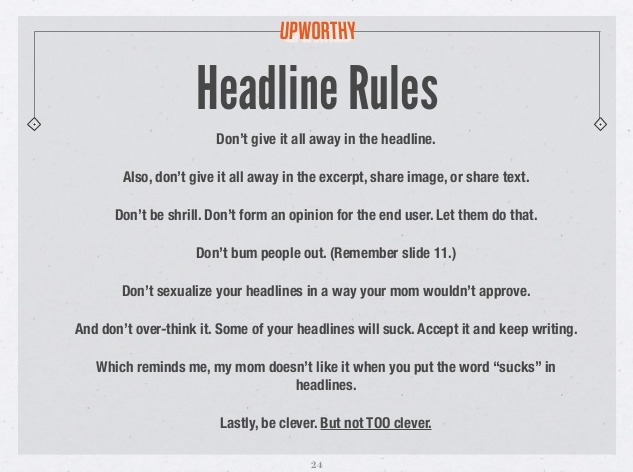 The Upworthy crew have good reason to use the word “desperate” when they talk about what happens along the way, and it is indeed exhausting to write even 20 passable headlines. I can’t tell you how many times I got up from my chair to crunch anxiety peanuts and make coffee during each of these sessions.

Realtalk: half of the headlines you create will be ridiculous, some of them won’t make any sense at all, and plenty of others will fall flat and boring. But man, is it satisfying when you strike upon one that’s music to your ears.

Except for this one thing: what sings to you as a writer might not mean a thing to your audience, which is why testing your headlines and getting a feel for what really works is a wholly worthwhile exercise.

Headline testing at Upworthy involves a dubious fairytale contraption to which they refer as the Magical Unicorn Box. If you’re not outfitted with one of these jobbies, that’s okay, because to test your headlines, all you really need is traffic, time, and Twitter. We followed Buffer’s protocol, which you can read more about here.

With Twitter as our lab, we sent out 4 title variations for each of the 4 articles we tested, then tracked which was the star performer. The system’s far from perfect, but the results were pretty clear.

Below is an example of one of our tests. I was deeply in love with the original title I concocted: it contained both a pun and a half-baked literary allusion to a classic Raymond Carver story. (Again — two lit degrees. I know.) 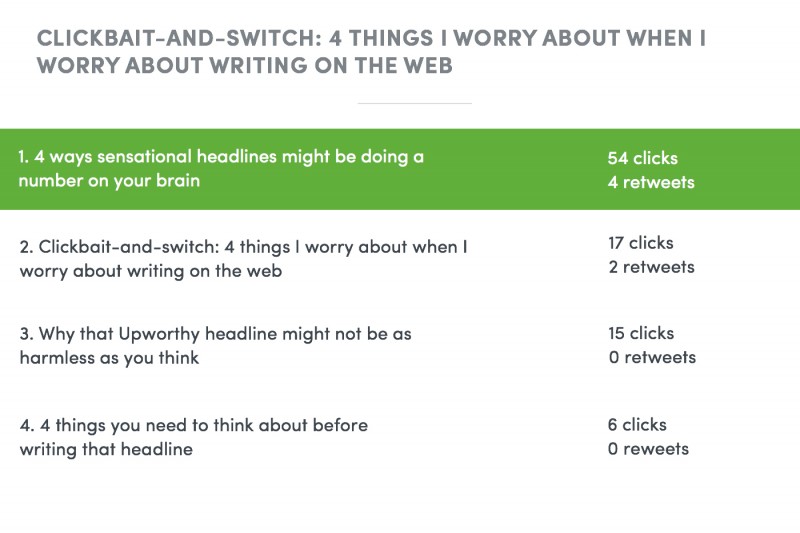 Sadly, it was not my beloved punnery that drummed up the most interest in the Twittersphere. Rather, the very simple, descriptive “4 Ways Sensational Headlines Might be Doing a Number on Your Brain” won out. And based on other tests we’ve been doing and even more reading, this makes sense. Here’s why:

What we know now

The “4 Ways” headline isn’t clever, it isn’t shocking, and there’s little curiosity gappage. According to our best source on which headlines grab the most eyes — (Yep, that’s Upworthy. They have data.) — descriptive headlines that reveal exactly what the content is are starting to rule them all.

The above winning title talks to people like I’d talk to people if we were having a conversation. In fact, this entire article is written in a fashion I’d call conversational. Over all, people tended to respond best to headlines free from puns and any academic posturing. Turns out my mum was right: nobody likes a smartass.

Truth #3: A little jolt of fear or uncertainty goes a long way.

Nobody’s suggesting scare tactics here — in fact, I draw myself in full opposition to sensational headlineage. But the truth remains that by hinting in a headline at something a person might miss, that they might be being bamboozled, or suggesting that they’re doin’ it (whatever “it” is) wrong, you’re going to get more eyes.

They love them. You love them. I love them, even though I don’t like to admit it. The beauty of “4 Ways”-type lists is that they provide a simple, structured way for our brains to prepare for and organize the information we’re about to consume.

They also give us a very clear idea as to what sort of commitment we’re making to a text right up front, allowing us to choose to read now, read later, or TL;DR — read never.

And finally: 9 Things We Learned by Writing 100 Headlines in 4 Days

Our best article got 4,400 views, 1,600 reads and 191 recommendations. Not the best in Mediumverse, but we’re making progress!

Limitations to our approach:

Testing the way we did works best for an account with a large number of Twitter followers. Our Twitter account has a little over 17,000 followers, hence, the difference between the best and worst headline is often less than 40 clicks. The figures will be more significant with accounts that have more than 50,000 followers.

And what Buffer says is also a thing: “A/B tests on social media are not perfect. The varying times of day that we use in our testing can make for significant variables, as can the images we use to share along with the headlines.” Timing, friends, is everything.

One method we’d like to try is testing our headlines via email.

It’s easy to set up an A/B test with two different segments in your mailing list, change the headline with Visual Website Optimizer, and track the clicks. This method isn’t perfect, either, and is another that works best with large lists of internet denizens, but it does provide another look into what looks good to readers. We’ll report back with more intel on this one soon as we’ve given it a go.

It’s also possible to test headlines with Outbrain and Taboola. Both are content marketing platforms that drop your articles in the “Content You May Like” section on the web’s largest and most respected media properties, including CNN.com, Slate and ESPN. 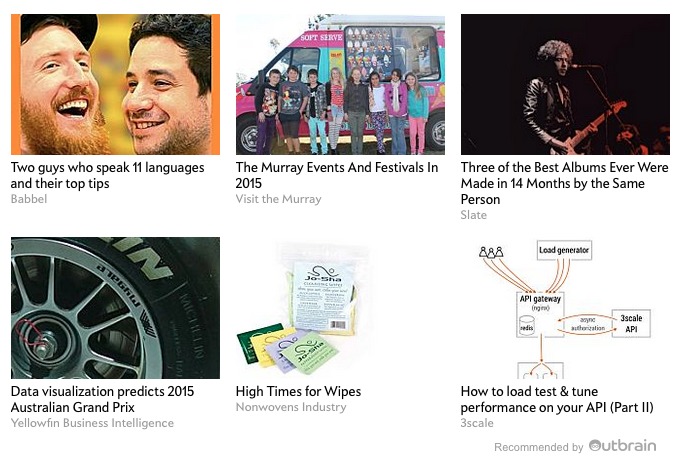 The awesome bit? You can submit different headline variations per article and the Outbrain/Taboola algorithm will A/B test these variations to find the best performing one. You can read more about headline testings over at Outbrain. Sadly, they are not free, but if you can afford a budget of $30 per article, they are worth consideration.

Bonus Round: 2 testing tips from Upworthy’s Colossus of Headlines 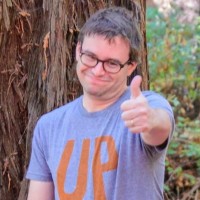 This article was originally published on Medium around this time last year. One of the first people to read it (and comment on it!) was Upworthy’s co-founder, Adam Mordecai. He gave us encouragement. He gave us sympathy. He gave us advice! And we figured, hey, why not give you his piece of headline-testing advice, too?

1. Try Shareprogress.org — a social headline a/b testing service. It offers simple tools to test on Facebook and Twitter, and gives you access to your community’s real-time sharing behavior.

2. Localize on Facebook with two similar demographics and two bit.ly links. In the Olden Tymes, Adam and crew used San Diego and LA audiences for this tactic. “Not the most accurate,” he admits, “but a free one.”

How do you test headlines?

We’re still learning from this, and we’d love to hear your stories of experimentation and improvement, too. Do you have a good one to share? Let us know in the comments here.