Bill Gates's favorite book, Business Adventures, is also a nightstand staple of Warren Buffett. Find out why two of the world's most successful men love this book so much.

Since Bill Gates blogged about his admiration for the John Brooks book Business Adventures, it has been reshelved at the top of the Amazon and NYT bestseller lists.

Business Adventures isn’t new, but it’s beloved by business tycoons, like Gates and Warren Buffet. Regardless of the era, there’s always new stories or anecdotes about successes and failures across a range of industries that could have been pulled from Brooks’s own writings.

Although it can be tough to find the time to read business books we’d like to — such as Business Adventures — Blinkist can help. The Blinkist app summarizes the key insights from the world’s best business, leadership and productivity books — in just 15 minutes or fewer.

Business Adventures details 12 critical moments in American industry, but perhaps above all — it teaches lessons about people. How they act, what makes them thrive and flounder, and what devilry they’re likely to get up to if left to their own devices.

The book acknowledges that technologies, best practices, and industries change — people never do, which is why you’ll find Business Adventures on the shelves of leaders at startups, multinationals, and global companies, because the lessons are timeless.

Of the book, Gates writes:

“Unlike a lot of today’s business writers – Brooks didn’t boil his work down into how-to lessons or simplistic explanations for success. Instead he uses prose and stories to introduce characters, then shows how things went for them.” 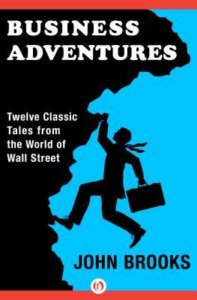 Facts are a lot less compelling than the dictates of the lizard brain. Over the course of only three days, fear and panic led the stock market to plummet $20 billion only to boomerang back up a day later.

2. A lesson from the Ford Edsel fiasco:

Pay close attention to your market. Customers’ wishes can change very quickly and it’s important to keep a finger on the collective pulse. When Ford wasn’t looking, the mid-sized category dropped off of their buyers’ radar to the point that “Edsel” has become shorthand for just this kind of failure.

3. A lesson from the federal income tax system:

Sometimes, the best solution is to scrap it. Over the years, the US tax system became so convoluted, corrupt, and loophole-laden that it now encourages inefficiency. The only real recourse would be a do-over.

Along with being inherently irrational, you can also count on people to be pretty self-serving. When Texas Gulf executives found out about mineral-rich ground the company had just struck, they slowly began buying up stock shares and telling their families to follow suit so they could reap all the rewards – all the while keeping the public in the dark. Thus, insider-trading laws were born.

5. A lesson from Xerox’s rollercoaster success:

Never trust a rapid success. And always keep an eye on your competition. Nobody expected copy machines to take off when Xerox launched its product in 1959, but by 1964, revenue was so good that the company could afford to drop $4 million to support the UN. By 1965, however, Xerox was in trouble: while they’d been busy philanthropizing, competitors had started to eat up market share.

Revenge isn’t actually so sweet – and it certainly doesn’t pay. To teach speculators a lesson, incensed Piggly Wiggly owner, Clarence Saunders, sought to buy back all of his stock. What he got instead was millions of dollars in losses and near-bankruptcy.

7. A lesson from the Bretton Woods Conference of ‘44:

A small group of determined individuals can prevail against a bigger, stronger foe. When a collective of savvy speculators believed Britain couldn’t keep up the currency exchange rates, they started betting against the pound in the market. Despite the odds (and a strong central bank alliance against them) they won.

We’ve skipped five of the other case studies here, but you can read all of the blinks from Business Adventures in the Blinkist library, so you can discover why so many industrial leaders consider this one of the essential texts to keep next to you on your desk.