What We Learned from ‘What Happened,’ Hillary Clinton’s Book about the 2016 Election

The former presidential candidate shares her side of the story in this riveting look at modern American politics.

Hillary Clinton’s new book, What Happened, is an essential read for anyone interested in understanding the landscape of politics in present-day America. And although this title has drawn considerable criticism since its publication in September, there’s one fact that’s hard to dispute: political junkies everywhere are still talking about what happened on November 8, 2016. 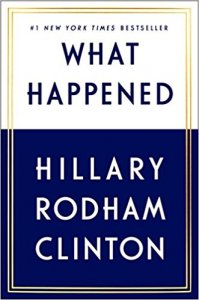 If you’d like to learn more about the former First Lady’s perspective on her historic loss, but don’t have time to read 500-plus pages about last year’s election, Blinkist can help you breeze through What Happened in under 15 minutes.

5 Key Points that Hillary Clinton makes in What Happened

On women in government

Despite the progress of women in politics, the field is still overflowing with sexism. And although Clinton never intended for her womanhood to play a pivotal role in her campaign, she’s well aware that her gender was an issue for many voters, and she believes the only way change will ever arrive in America is if more women run for local, regional, and national positions in government.

On idealism versus realism

Among the numerous distinctions Clinton outlines between her and her Democratic rival, Bernie Sanders, was their approach to the finer points of their policies. While Sanders vowed to make college education free for every American, Clinton feels he remained vague on exactly how he intended to do so. Clinton, on the other hand, always felt it was more important to have realistic plans, even if they weren’t as exciting. Yet in the months following her defeat, Clinton’s come to believe that ambitious—even lofty—goals could have changed the tides of her campaign and given her the edge she needed to defeat candidates on both sides of the aisle.

On the importance of the right messaging

While proposing to create more modern employment opportunities for residents of West Virginia and the greater Appalachian area, Clinton uttered the phrase, “We’re going to put a lot of coal miners and coal companies out of business.” And although she was referencing the jobs she intended to create by upgrading the region’s infrastructure, she writes that the right-wing media took her quote out of context and twisted her words to imply the exact opposite of her actual message. It didn’t take long for Clinton to regret using that phrase, especially when she found herself facing protests from people she truly wished to help.

Clinton writes that, “listening to Trump, it almost felt like there was no such thing as truth anymore. It still feels that way.” Running against Donald Trump rapidly became a frustrating experience for Clinton, as his sheer unpredictability meant it was hard to prepare measured responses. She writes, “The goal is to make you question logic and reason and to sow mistrust toward exactly the people we need to rely on: our leaders, the press, experts who seek to guide public policy based on evidence, ourselves. For Trump, as with so much he does, it’s about simple dominance.”

On the necessity of public involvement

The 2016 election left many unanswered questions in its wake, giving Americans a great deal to contemplate. And like many others around the world, Clinton herself is eager to learn the truth behind what led to her stunning defeat. Shocking revelations are still being uncovered on a near-daily basis, leaving many to wonder if the U.S. democratic process has been completely undermined. But in order to understand exactly what occurred and to ensure such an attack never happens again, Clinton believes more citizens must get involved in politics starting at the local level.

Despite the myriad issues Hillary Clinton faced during her time as the Democratic candidate for president, a majority of polls pegged her as a clear winner—even leading up until the final hours of election night. What Happened offers an inside look at the unfolding of the most stunning upsets in modern American politics and includes Clinton’s advice to those who have lost faith in our government.

To hear more about Hillary’s side of the story, or to discover the insights from a bevy of other books about modern politics, download the Blinkist app today, and dive into our ever-expanding library. With more than 2,200 books ranging in topics from finance to fitness, sex to psychology, and marketing to management, there’s no telling what you’ll learn. So what are you waiting for? Launch the Blinkist app today and you’ll be brighter tomorrow.